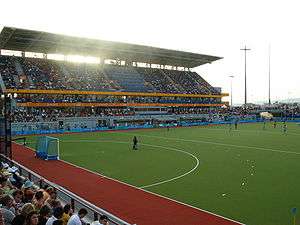 Hellinikon Stadium during the 2004 Olympic Games

Hellinikon Stadium is a stadium located at the Hellinikon Olympic Complex in Hellinikon, located approximately 8 kilometres south of the center of Athens, near Glyfada on the Aegean Sea coast. Ethnikos Piraeus F.C. currently plays its home matches there.

The Olympic Baseball Centre's main stadium underwent renovations for football use, and Ethnikos began playing matches there during the 2007–08 season; the team played its first official match in its new home on October 20, 2007. The facility became known as Hellinikon Stadium, and is commonly referred to as Helliniko.

Ahead of the 2008–09 season renovations continued and seating capacity was increased to 10,000.

It is currently used as a refugee camp for those awaiting processing in Greece.[1]