Emmanuel Chinenye Emenike (born 10 May 1987) is a Nigerian international footballer who plays as a striker for Fenerbahçe.[2]

Emenike started his football career with Delta Force. He revealed he walked on foot to training and back, even though it could take an hour and a half. He said he didn't get paid as he played at the club when it was non-professional and were in a low division, the club were also refused funds from the Delta State government.

Later on his career, he would earn his first salary when he moved to South Africa.[3] He transferred to South African National First Division team Mpumalanga Black Aces in January 2008 and debuted against Dynamos F.C. on 17 February 2008. He scored his first goal with the team in his debut but Black Aces lost the match 4–2.[4] He was a member of the Black Aces team that lost against Mamelodi Sundowns in the Nedbank Cup final.

In 2009 Emenike signed a one-year loan deal[5] with Karabükspor. Emenike made his debut in the opening game of the 1.Lig season on 23 August 2009 in a 3–3 draw against Samsunspor. He would score his first goal on 11 October, against Kartal. Emenike would score his first hat-trick of his Turkish career in a 6–1 win over Mersin İdmanyurdu and score another hat-trick on 14 February 2010 in a 4–2 win over Kayseri Erciyesspor. He went on to score 16 goals in the 1.Lig, leading the club to the title and automatic promotion.[6]

Emenike scored on his Süper Lig debut, helping Karabükspor to a 2–1 victory over Manisaspor.[8] On 28 November 2010, He scored his first hat-trick in Süper Lig career in a 3–0 win over Bucaspor. He subsequently scored a total of 14 goals in his debut Süper Lig season.[6]

In May, 2011, he initiated a lawsuit against the newspaper 'Haber Turk' for what Emenike's agents describe as "misleading" and "malicious" claim that Emenike's age is 7 years different than is shown on his passport.[9] 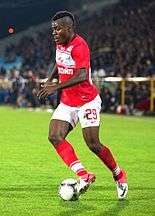 Emenike in a Spartak Moscow shirt.

On 28 July 2011, he was sold to Spartak Moscow for €10 million due to the match fixing scandal involving Fenerbahce and Emenike.[12][13] Emenike had never appeared in a competitive match for Fenerbahçe.

Emenike made his debut on the opening game of the season coming on as a substitute for Ari in the 76th minute, against Anzhi Makhachkala on 14 August 2011. Emenike made his Europa League debut in a 2–2 draw against Polish side Legia Warsaw in the first leg of the qualification round. Emenike scored his first goal for the club with a 2–2 draw against CSKA Moscow.[14] On 29 October 2011, Emenike scored his first hat-trick in a 3–0 win over Lokomotiv Moscow and the next game when Spartak played against Lokomotiv, he would score twice.

Towards the end of season, Emenike was fined about US$17,000 for an offensive gesture after Dynamo Moscow fans, who racially abused him during a match between Spartak and Dynamo, which Spartak won 3–1 and he scored. Vladimir Vasilyev, a Russian FA's ethics committee official, explained the fine, stating it was "an adequate punishment".[15]

In the last game of the season against champions Zenit Saint Petersburg, Emenike scored the second goal in the game but received a red card after he appeared to do a mock vein-tapping in preparation for an imaginary heroin injection.[16] Eventually, Spartak Moscow would win 3–2. After the game, Emenike made an explanation celebration for gratitude to his parents[17] The meeting between House of Football Control and Disciplinary Committee refused to consider the incident and shifted responsibility for the decision by the Ethics Committee.[18]

In the 2011/12 season, Emenike scored 13 goals (all in the league) and is the second top-scorer behind Artyom Dzyuba, who scored one more than Emenike. At the end of the season, Emenike signed a four-year deal and increased his buy-out clause to $42 million.[19] 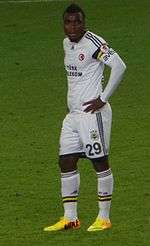 Emmanuel Emenike playing for Fenerbahçe in 2013 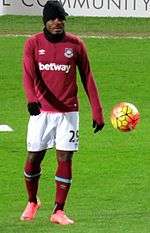 Emenike with West Ham United in 2016

In 2012–13 season, Emenike scored the fastest goal in the history of the Russian League, within 10 seconds of kick-off in a 2–1 win over Alania Vladikavkaz on the opening game of the season. In the Champions League qualifying round against his former club Fenerbahçe, he scored in a 2–1 first leg win. Eventually, Spartak Moscow would go through to the Group Stage of the Champions League. In Matchday Two of the Group Stage, Emenike scored a brace in a 3–2 loss against Scottish side Celtic. After the match, Nigerian team-mate Efe Ambrose spoke to Goal.com praising Emenike for his "electrifying performance"[20] But in the second half of the season, his playing time was reduced, due to injuries.[21][22] In 2013–14 season, Emenike scored three goals in four matches, to send the club into first place in the league in the first-four matches. When Emenike left Spartak he said that Valeriy Karpin (Spartak coach) was like a father to him.

In August 2013, Emenike moved back to Turkey by returning to Fenerbahçe for a fee worth around €13m (£10.2M).[23] He was noted to be "thrilled" and was quoted saying Fenerbahce had always been a dream for him, and he had returned to perform for the fans and win championships. His first match for Fenerbahçe against Torku Konyaspor ended in a 3–2 loss. He scored his first goal for Fenerbahçe in October 2013 against Kayserispor in the 94th minute, securing a last minute win. He scored two more against Gaziantepspor a week later, while Fenerbahçe won 3–1.

On 11 July 2015, Emenike signed for Al Ain on a season-long loan.[24] On 13 January 2016, after spending six months at the club, Emenike returned to Fenerbahçe after his loan move was terminated by the club.

On 31 January 2016, Emenike signed for West Ham United on loan until the end of the season with an option to make it permanent.[25] On 6 February, Emenike made his debut as a 73rd-minute substitute replacing Michail Antonio in a 1–0 defeat at Southampton.[26] On 21 February, Emenike scored a brace in a 5–1 win against Blackburn Rovers in the FA Cup, his first and only goals for the club.[27]

Emenike was called up to the Nigeria national football team for a friendly against Sierra Leone.[28] He was called up to Nigeria's 23-man squad for the Africa Cup of Nations.[29] On 21 January 2013, he scored in Nigeria's opening AFCON match against Burkina Faso in a 1–1 draw. He also scored the first goal in the quarter final match between Nigeria and Côte d'Ivoire which Nigeria won 2–1. On 3 February, Emenike scored a 30-yard free kick giving his country a 2–1 win over Côte d'Ivoire in the African Cup of Nations.

In 2013, he became part of the third Nigerian team to win the African Cup of Nations – Nigeria's first continental victory since 1994. His four goals proved crucial to Nigeria's progress through the tournament, and he was named to the team of the African Cup of Nations Team of the Tournament.[30] However, Emenike wasn't included in the final, due to a thigh injury.[31] He also received the Pepsi Tournament Top Scorer, with four goals, along with Ghana's Wakaso Mubarak.[32]

In March 2013, Emenike was left out of the Nigerian squad for the World Cup qualifier, due to hamstring injury,[22] which Emenike criticised Nigeria's coach and officials of ignoring him.[33] In June 2013, Emenike wasn't included for Nigeria's squad at the 2013 FIFA Confederations Cup.[34] After four month without being called up, Emenike was called up for August's Mandela Cup friendly match but did not participate due to injury.[35] Emenike celebrated his absence from Eagles in Sept 2013 when he played in the 2014 world cup qualifier against Malawi – played in Calabar. He scored a goal in the two-nil win by the Super Eagles – a win which took them to the final round of world cup qualifiers.[36] He came on as a substitute three days later in a friendly match against Burkina Faso, played in Kaduna – he scored the fourth goal in a 4–1 win for the Eagles.

On 13 October 2013, in the first-leg of last round of the World Cup qualifier against Ethiopia, he scored twice to give the Super Eagles a 2–1 lead going into the second-leg[37] On 20 October 2015 he announced his retirement.[38]