Born in France, he spent most of his career in Italy after starting out at Sporting Clube de Portugal, amassing Serie A totals of 117 games and 13 goals. He represented in the competition A.S. Roma, Internazionale and Fiorentina, amongst other clubs.

Kharja began his career with Paris Saint-Germain's youth side and in 2000 he joined Portuguese side Sporting Clube de Portugal.

After only one season for Sporting, he joined Ternana in 2001. He played four impressive Serie B seasons for the Rossoverdi, gaining a place in the Moroccan national team, and being loaned to Roma in 2005, with option to buy him in co-ownership deal for €3.6 million.[2] Kharja played 12 matches and scored one goal during a 1–1 draw against Juventus.

At the end of the 2005–06 season, Roma decided not to extend Kharja's loan, so the Moroccan player returned to Ternana, but he refused this transfer because in the meantime the Rossoverdi had been relegated to Serie C1. Ternana considered him as their own player,[3][4] and Lega Calcio Serie C even suspended him until 26 April 2007.[5] After appeals, FIGC's court decided that Kharja was a free agent, and so, on 20 March 2007 he signed a three-year contract with Serie B team Piacenza.[6] On January 2008, he was loaned to Siena for the second half of the season, with this deal being turned a permanent one on 11 July.

In June 2009, Genoa announced the club was reaching an agreement to sign the player[7] and on 2 July the transfer from Siena was completed.[8] Genoa got Kharja for €6.5 million, while Siena signed the remain 50% registration rights of Manuel Coppola for €1.5M and the full rights of Gianluca Pegolo for €1M.[9]

It was announced on 29 January 2011, that Kharja had joined Internazionale on a loan deal with the option of Inter signing him permanently.[10] He scored his first goal for Internazionale during his second appearance for the club against Bari on 3 February 2011. At the end of his loan spell, Inter decided not to give the player a permanent deal, and so he returned to Genoa.

On 18 August 2011, Fiorentina signed the player on a co-ownership deal, signing a two-year deal.[11]

He was involved in an altercation with Al Gharafa player Nenê on 19 March 2013 in a Qatari Stars Cup match. After Kharja persistently fouled Nenê for the majority of the match, Nenê was sent off in an unrelated incident after a challenge on one of Kharja's teammates. When Nenê attempted to protest the referee's decision, Kharja shoulder-blocked him, preventing him from reaching the referee. Nenê responded by elbowing Kharja in the back of the head. After a delayed reaction, Kharja attacked Nenê, who was then being restrained by teammates. This induced a brawl between the two teams.

Harsh sanctions followed after the match, with 4 players being fined and banned from match play as well as a member of Al Arabi's staff being fined and warned. Kharja received the most harsh penalty, being fined QR 380,000 and receiving a 10-game ban, the largest penalty in the history of the Qatar Stars League.[13] Later, on 31 March, after a 4–1 defeat to Lekhwiya in the league, Al Arabi terminated his contract as a result of the aftermath of the brawl.[14] He later stated that he had not received notification that his contract was terminated.[13]

On 10 October 2014, Sochaux announced that Houssine Kharja had joined on a 1-year contract after playing 16 years away from his native France.[15]

In September 2015, he joined Romanian defending champions Steaua București on a one-year deal.[16] He made his Liga I debut in the 3–1 win against Concordia Chiajna, three days after signing the contract.[17] 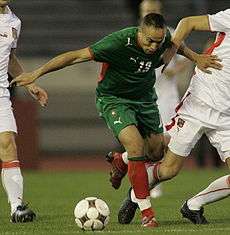 Kharja with Morocco in their friendly against Czech Republic on 11 February 2009.