Pierre-Emerick Emiliano François Aubameyang (French pronunciation: [pjɛʁ ɛməʁik obaməjɑ̃ɡ]; born 18 June 1989) is a French-born Gabonese professional footballer who plays for German club Borussia Dortmund and the Gabon national football team.[3] He is known for his speed, having clocked 30 metres in 3.7 seconds, and his capability of playing as a forward or a winger.[4]

He began his career at Milan, who loaned him to four French clubs before he joined Saint-Étienne permanently in 2011. After winning the 2013 Coupe de la Ligue Final, he joined Dortmund, where he has twice won the DFL-Supercup in 2013 and 2014. Despite playing once for France Under-21, Aubameyang made his senior international debut for Gabon in 2009, and has represented them at three Africa Cup of Nations tournaments and the 2012 Olympics.

He is the current holder of CAF's African Footballer of the Year award, becoming the first Gabonese player to win the award.[5]

Aubameyang joined Milan's youth team in January 2007. In August, he was part of the squad that finished fourth in the inaugural Champions Youth Cup held in Malaysia, where he made a name for himself and attracted the attention of scouts internationally. He scored against every opponent Milan played, finishing with seven goals in six matches.[6] He was awarded the Roberto Bettega Trophy for being the top scorer of the competition.

For the 2008–09 season, Aubameyang was loaned out to Dijon in France in order to gain first team experience.[7] His performances there led him to appear in World Soccer's Talent Scout section in Summer 2009.[8] He finished with a total of ten goals and two assists in all competitions (two assists and eight goals in the league, two goals in the Coupe de la Ligue. His coach, Daniel Joseph, said, "Pierre's performance is impressive considering the fact he is only 18 ... he has tremendous physical ability, a willingness to run at defenders and a long time ahead of him to improve."

On 24 June 2009, it was announced Ligue 1 club Lille had decided to sign Aubameyang on loan.[9] Relative to his previous season, however, Aubameyang did not perform as well, scoring just two goals in 14 appearances, four as a starter.

For the 2010–11 season, Aubameyang was loaned for the season to Monaco. On 21 August 2010, he scored his first goal for Monaco in an away match against Lens, then scored again on 29 August at home to Auxerre, where Monaco won 2–0.[10] In January 2011, after six months with the club, Aubameyang was loaned to Saint-Étienne until the end of the 2010–11 season, finishing the season with four goals and three assists. In July 2011, the loan was extended for the entire 2011–12 season. 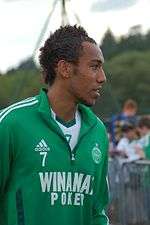 Aubameyang at Saint-Étienne in 2011

On 22 December 2011, Aubameyang signed with Saint-Étienne on a permanent deal. He was quickly added to the starting line-up and was given the number 7 jersey. In February 2012, he scored his first hat-trick against Lorient. He became an integral part of the squad, scoring half of the team's away goals during the season, and went on to be Ligue 1's top goalscorer with 16 goals.

During the warm-up in a match against Lyon, he wore a £2,500 pair of swarovski crystals encrusted boots. On 20 April 2013, Aubameyang was in the starting line-up for Saint-Étienne in the 2013 Coupe de la Ligue Final. Les Verts won the match 1–0 with a goal from Brandão to give Aubameyang his first major trophy as a professional footballer. He finished the season with 18 goals and seven assists in all competitions.

In the 2012–13 season, Aubameyang ended second in the competition's top-goalscorers list, scoring 19 goals and finishing behind only Zlatan Ibrahimović. From his 37 appearances, he also provided eight assists. The season was widely regarded as his breakout year—he appeared in the Ligue 1 team of the season and he won the Ligue 1 African Player of the Year award. 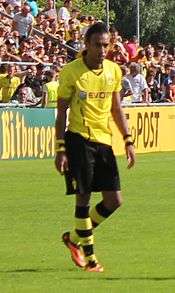 Aubameyang with Borussia Dortmund in 2013

On 4 July 2013, Aubameyang joined 2012–13 Champions League finalists Borussia Dortmund on a five-year contract.[11] He made his competitive debut for his new club on 27 July 2013 against Bayern Munich in the DFL-Supercup, replacing Jakub Błaszczykowski for the last 18 minutes of Dortmund's 4–2 victory, assisting Dortmund's final goal, scored by Marco Reus.[12] On 10 August, Aubameyang made his Bundesliga debut and scored a hat-trick against FC Augsburg, including a goal from his first shot in the league. In the process, Aubameyang also became the first Gabonese player to appear in the Bundesliga.[13] On 27 November, He scored his first Champions League goal in a 3–1 win against Napoli in the group stage of the 2013–14 competition.[14] He later took a penalty against 1860 München that propelled Dortmund into the next round of the DFB Pokal, finishing the year with 13 league goals and 16 goals in all competitions.

Aubameyang in action against Rot-Weiss Essen in July 2014

Aubameyang ended his second season in Dortmund with 25 goals from 46 appearances, including one in the 2015 DFB-Pokal Final, where BVB were defeated 3–1 by VfL Wolfsburg at the Olympiastadion Berlin.[19]

In scoring in Dortmund's 1–1 draw with 1899 Hoffenheim on 23 September, Aubameyang became the first player in Bundesliga history to score in each of his team's opening six matches of a season.[22] He later extended this record to eight matches, scoring in the team's next two fixtures against Darmstadt 98 and Bayern Munich, before failing to score for the first time in the Bundesliga season in a 2–0 win at Mainz 05.[23]

On 22 October, Aubameyang scored a hat-trick in a UEFA Europa League match against Gabala FK of Azerbaijan.[24] Three days later, he scored another hat-trick in a 5–1 defeat of Augsburg at the Westfalenstadion.[25]

On 8 November, Aubameyang scored the winning goal for BVB in a 3–2 Revierderby victory over rivals FC Schalke 04.[26]

At the halfway stage of the Bundesliga season, Aubameyang was the league's top scorer with 18 goals from 17 appearances.[27]

Aubameyang reached 30 goals in all competitions in a 3–1 victory over VfB Stuttgart in the quarter-final of the 2015–16 DFB-Pokal. In addition to scoring himself, he assisted the side's other two goals scored by Marco Reus and Henrikh Mkhitaryan.[29]

On 10 March 2016, Aubameyang scored for Borussia in their 3–0 win over Tottenham Hotspur in the UEFA Europa League Round of 16 first-leg. A week later, he scored both goals in the 2–1 second-leg victory at White Hart Lane, taking him to 35 goals for the season.[30]

In scoring two goals in a 5–1 win against VfL Wolfsburg on 30 April, Aubameyang reached 25 goals in the Bundesliga season, thus ending as the league's second-top scorer behind Robert Lewandowski of FC Bayern.[31] Aubameyang was named Bundesliga Player of the year[32] later that same year.

Aubameyang began his 2016–17 season in the Bundesliga with a double against FSV Mainz 05 on 27 August in a 2–1 victory, while also scoring twice against VfL Wolfsburg on 20 September. Aubameyang scored three days later against recently promoted SC Freiburg, bringing his season total to 5, into a tie atop the scoring charts with Lewandowski early in the season. Following an injury to Marcel Schmelzer, Aubameyang wore the captain's armband for Dortmund for the first time on 22 October, also scoring a goal in the 3–3 draw at FC Ingolstadt.[33]

Aubameyang also got off to an excellent start in Dortmund's Champions League group stage matches, scoring in each of their first leg matches as Dortmund were joint top of their group with Real Madrid. However, Aubameyang was left out of the squad by Thomas Tuchel for their return leg against Sporting CP on 2 November due to an "internal issue".[34] It turned out that he received a one-game suspension for breaking club rules, by traveling to Milan instead of staying in Dortmund.[35] Expected to return that weekend at Hamburger SV, Aubameyang exploded with a four goal performance in a 5–2 victory, their first in five tries in the Bundesliga, while also assisting Ousmane Dembélé for Dortmund's final goal.[36] 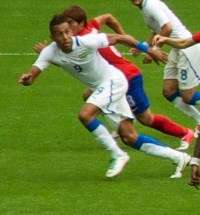 Aubameyang playing for Gabon against South Korea at the 2012 Olympics

Aubameyang was invited to play for Italy U-19s after a good season with Dijon, but he debuted for the France under-21 team in February 2009 in a friendly match against Tunisia.[37]

On 25 March 2009, Aubameyang was selected for the Gabonese national team[38] and made his debut for the squad. He scored his first goal in a 3–2 victory over Morocco, then scored a goal each in friendly matches against Benin, Togo, Algeria and Senegal.

Aubameyang was a key member of the Gabon national side that reached the quarter-finals of the 2012 Africa Cup of Nations as co-hosts of the competition. He netted three goals in total, finishing the tournament as one of the top scorers. On 5 February 2012, he set up the opening goal for his team and hit the post in the quarter-final against Mali. However, the match ended 1–1 after extra time and Aubameyang had his penalty saved in the shootout to decide the game.

In July 2012, Aubameyang represented Gabon at the 2012 Olympic Games in London. He scored in the team's opening game against Switzerland, which was Gabon's first-ever Olympic goal, and would also prove to be Gabon's only goal of the tournament. They were eliminated in the group stage.

On 15 June 2013, Aubameyang scored a hat-trick of penalty kicks in Gabon's 4–1 2014 FIFA World Cup qualifying win over Niger. He then scored a brace against Burkina Faso in the 2015 Africa Cup of Nations Qualification.

Aubameyang captained Gabon at the 2015 Africa Cup of Nations, scoring the team's opening goal of the tournament in their 2–0 win over Burkina Faso on 17 January 2015.[39] He also scored a brace against Mali on 25 March 2015. He is Gabon's highest goalscorer.

Aubameyang is the son of former Gabonese international Pierre Aubameyang and younger brother of Catilina and Willy, who have both played for Milan youth teams. His mother is French from Spanish descent.[40] 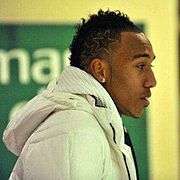