In linguistics, the empty category principle (ECP) was proposed in Noam Chomsky's syntactic framework of government and binding theory. The ECP is supposed to be a universal syntactic constraint that requires certain types of empty categories, namely traces, to be properly governed.

ECP is a principle of transformational grammar by which traces must be visible, i.e. they must be identifiable as empty positions in the surface structure, similar to the principle of reconstruction for deletion. Thus an empty category is in a position subcategorized for by a verb. In government and binding theory this is known as proper government. Proper government occurs either if the empty position is governed by a lexical category (especially if it is not a subject) (theta-government) or if it is coindexed with a maximal projection which governs it (antecedent-government). The ECP has been revised many times and is now a central part of government and binding theory.[1]

In spite of its name, the ECP applies to only two of the four types of empty category. The chief function of the ECP is to place constraints on the movement of categories by the rule of alpha movement; it effectively allows a tree structure to "remember" what has happened at earlier stages of a derivation, and it can be seen as GB's version of the older derivational constraints.[2]

Formally, the ECP states that:

The ECP is a way of accounting for, among other things, the empirical fact that it is generally more difficult to move up a wh-word from a subject position than from an object position.

The intermediate traces must be deleted because they cannot be properly governed; theta-government is impossible because of the position they occupy, Spec-CP; the only possible antecedent-governor might be an overt NP (a wh-word), but the Minimality Condition would always be violated because of the tensed I (which must be present in all matrix clauses), the tensed I would c-command the intermediate trace but it would not c-command the wh-word. So we have to say that intermediate traces must be deleted at logical form so that they can avoid the ECP.

For example, in the sentence Who do you think (that) John will invite? the ECP works in the following way (the structure is given for the embedded clause only): 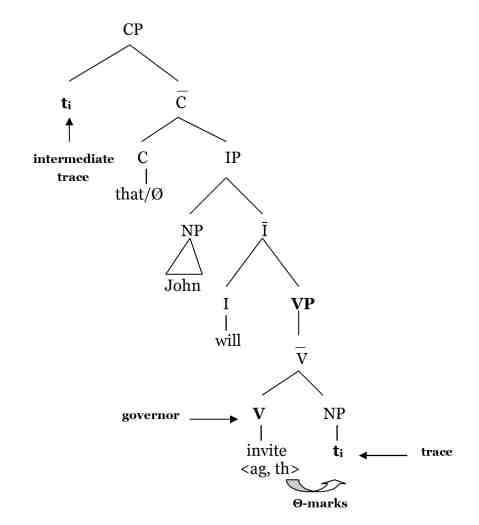