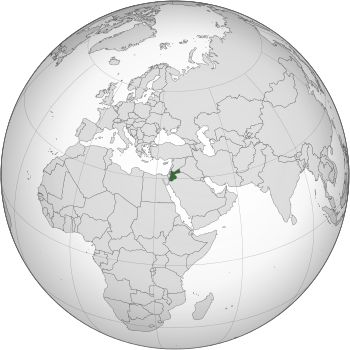 Location of the Hashemite Kingdom of Jordan.

Energy in Jordan describes energy and electricity production, consumption and import in Jordan. Jordan is among the highest in the world in dependency on foreign energy sources, with 96% of the country's energy needs coming from imported oil and natural gas from neighboring Arab countries. This complete reliance on foreign oil imports consumes a significant amount of Jordan's GDP. This led the country to plan investments of $15 billion in renewable and nuclear energy. To further address these problems, the National Energy Strategy for 2007-2020 was created which projects to boost reliance on domestic energy sources from 4 per cent to 40 per cent by the end of the decade.

Moreover, multiple attacks on the Arab Gas Pipeline from 2011-2014 which supplies 88% of the country's electricity generation needs - forced the country’s power plants onto diesel and heavy fuel oil, costing the treasury millions of dinars and pushing the national energy bill to record highs, over JD4 billion.

Natural gas is increasingly being used to fulfill the country’s domestic energy needs, especially with regard to electricity generation. Jordan was estimated to have only modest natural gas reserves (about 6 billion cubic meters in 2002), but new estimates suggest a much higher total. In 2003 the country produced and consumed an estimated 390 million cubic meters of natural gas. The primary source is located in the eastern portion of the country at the Risha gas field. The country imports the bulk of its natural gas via the recently completed Arab Gas Pipeline that stretches from the Al Arish terminal in Egypt underwater to Al Aqabah and then to northern Jordan, where it links to two major power stations. This Egypt–Jordan pipeline supplies Jordan with approximately 1 billion cubic meters of natural gas per year.[3] The ministry is also moving forward with plans to construct a liquid gas terminal in the Port of Aqaba by 2013.

Jordan has developed one gas field, at Risha in the eastern desert near the border with Iraq. The current output of around 30 million cubic feet per day (Mmcf/d) from the Risha field is used to fuel one nearby power plant, which generates about 10% of Jordan's electricity.[4]

In May 2001, a 30-year agreement had been concluded with Egypt for gas sales to begin at a rate of 100 Mmcf/d beginning in 2003. Construction of the section of the pipeline in Egypt began in late 2001, starting from the existing pipeline terminus at El-Arish in Sinai. This section was completed in mid-2003, allowing deliveries to begin to one power plant at Aqaba.

In August 2003, Jordan began imports of natural gas from Egypt.[4] The second phase of the project, which connected to the Rihab power plant approximately 70 km north of the capital Amman, was completed in early 2006. The plant site is approximately 835 meters above sea level and located within a rural area surrounded by extensive agricultural land. The Rihab power plant comprises 2 simple cycle gas turbines which are nominally rated at 30 MW gross and a 297 MW combined-cycle gas turbine which comprises 2 gas turbines with 100 MW and 1 steam turbine with 97 MW.[5]

Oil shale represents a significant potential resource in Jordan. Oil shale deposits underlie more than 60% of Jordanian territory, and are estimated at 40 to 70 billion tonnes of oil shale.[6] The deposits include a high quality marinite oil shale of Late Cretaceous to early Tertiary age.[7] The most important and investigated deposits are located in west-central Jordan, where they occur at the surface and close to developed infrastructure.[6][8]

Although oil shale was utilized in northern Jordan prior to and during World War I, intensive exploration and studies of Jordan's oil shale resource potential started in the 1970s and 1980s, being motivated by higher oil prices, modern technology and better economic potential. As of 2011, no oil shale industry exists in Jordan, but several companies are considering both shale oil extraction and oil shale combustion for thermal power generation.[9]

A series of projects is set to make available 37,000 tonnes of shale oil in the central region of Attarat by 2015, 15,000 tonnes in Karak by 2017, and develop thousands of tonnes in potential shale reserves along the Jordanian-Iraqi border.

Plans are in place to construct two 1,000MW reactors, nearly doubling the Kingdom's electricity generation capacity, by 2022. Jordan plans to get 60% of its energy needs from nuclear energy by 2035. According to the JAEC, all evaluations took into account the highest safety requirements, including lessons from the Fukushima incident. The plants will be used for electricity generation and desalination.[13]

The government first chose a site 25 kilometers south of the Red Sea port of Aqaba[10][11] but shifted the tentative location to the Mafraq area, 40 kilometers northeast of Amman, citing the proximity to the Khirbet Al Samra power plant for using its wastewater to cool the reactor. The decision to relocate the site was taken by the Belgian contractor, Tractabel, which has concluded that the seismic padding required to build on the original site near Aqaba would have led to additional costs of about 15 percent according to JAEC officials.[12]

In December 2009, Jordan Atomic Energy Commission (JAEC) in cooperation with a consortium headed by the Korean Atomic Energy Research Institute signed an agreement with Daewoo Heavy Industries to build a its first 5 MW research reactor by 2015 at the Jordan University of Science and Technology.[14]

The National Energy Strategy includes ambitious targets to increase the contribution of renewable energy sources to the national energy supply. The share of renewable energy in the total energy mix is anticipated to reach 7% by 2015 and 10% by 2020. Plans are in place for up to 2,000 MW in solar and wind energy projects by the end of the decade, with 64 international firms expressing interest in various projects across the country. The government is looking to generate 30–50 MW of biomass by 2020.[15] The passage of the Renewable Energy and Energy Efficiency Law, which aims to streamline investment procedures and paves the way for citizens to sell electricity back to the national grid, would go a long way into breathing life into the alternative energy sector.[16] By November 2014 Jordan had 10 MW of installed capacity from renewable energy, and had over 15 renewable energy power plants in progress to be completed by the end of 2015, raising the installed capacity to 500 MW, representing 14% of the overall installed capacity.[17] 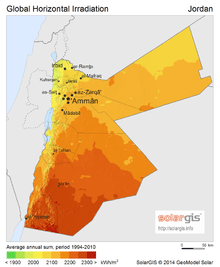 Jordan lies within the solar belt of the world with average solar radiation ranging between 5 and 7 kilowatt-hour (kWh) per square metre. Decentralized generation from photovoltaic systems in rural and remote villages is currently used for lighting, water pumping and other social services of up to 1000 kW of peak capacity. In addition, about 15% of all households are equipped with solar water heating systems.[18] In May 2012, a 280 kW solar electricity system was inaugurated to be used at El Hassan Science City.[19]

As per the Energy Master Plan, 30 percent of all households are expected to be equipped with solar water heating system by the year 2020.[18] The government is hoping to construct the first concentrated solar power (CSP) demonstration project in the short to medium term and is considering Aqaba and the south-eastern region for this purpose. It is also planning to have solar desalination plant. According to the national strategy the planned installed capacity will amount to 300–600 MW consisting of CSP, PV and hybrid systems by 2020.[18]

Several projects with a total capacity of 400 MW were already allocated in two 200-megawatt tender rounds.[20] First Solar signed a Build-Operate-Maintain contract with the Jordanian government for the 52.5 MW Shams Ma'an Solar PV power plant, with a 20-year power purchase agreement (PPA). Construction of the plant is expected to start in early 2015 and finish in 2016.[21] The Shams Ma'an project was tendered in the first round and granted a tariff of US 14.8¢ per kilowatt-hour, while the second round drew record-low tariffs of six and seven cents per kilowatt hour for each of the four 50-megawatt projects (US 6.13¢, 6.49¢, 6.91¢ and 7.67¢ per kWh).[20] These tariffs belong to the worldwide lowest so far ever allocated and are not much above the world record tariff of US ¢5.89 per kWh tendered in early 2015 for the second phase of the Mohammed bin Rashid Al Maktoum Solar Park in the United Arab Emirates.[22]

Although the proposed 65–75 MW photovoltaic power station project for Quweira has first been reported to undergo cancellation[23] the bidding was held in 2014, with the energy ministry still to determine which of the 15 prequalified bidders will be the winner in mid-2015.[24]

Jordan inaugurated its first solar-powered charging station for electric cars in February 2012. Located at El Hassan Science City (EHSC), the station is considered the first step towards promoting solar-powered vehicles and building more solar-charging facilities on the streets of Jordan.[26]

The Sahara Forest Project, a Norwegian endeavour to create oases in hot, arid and uninhabited lands, is currently being implemented in the southern city of Aqaba, with the cooperation of the Aqaba Special Economic Zone Authority, to address its food, water and energy challenges. The objective of the project is to enable restorative growth, revegetation, and creation of green jobs through the profitable production of food, freshwater, bio fuels and electricity. The three core components of the Sahara Forest Project are saltwater-cooled greenhouses, concentrated solar power (CSP) for electricity and heat generation, and technologies for desert revegetation.[27]

In October 2016, Jordan signed a power purchase agreement with Masdar, a clean energy developer based in Abu Dhabi, UAE to build the biggest single solar installation in the country once complete with a 200 MW capacity. The project is expected to be operational by 2018 and deliver 110,000 local households with their annual power needs. [28]