This article is about region of Syria. For other meanings, see Syria (disambiguation). 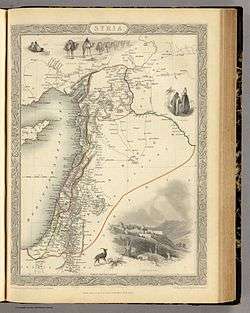 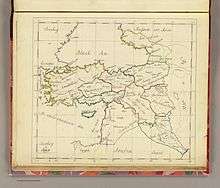 An 1810 map of the Ottoman Empire in Asia, showing the region of Ottoman Syria 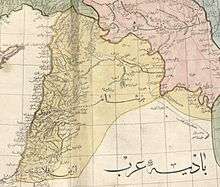 The historic region of Syria (Hieroglyphic Luwian: Sura/i; Greek: Συρία; in modern literature called Greater Syria, Syria-Palestine, or the Levant) is an area located east of the Mediterranean sea. The oldest attestation of the name Syria is from the 8th century BC in a bilingual inscription in Hieroglyphic Luwian and Phoenician. In this inscription the Luwian word Sura/i was translated to Phoenician ʔšr "Assyria."[1] For Herodotus in the 5th century BC, Syria extended as far north as the Halys river and as far south as Arabia and Egypt. For Pliny the Elder and Pomponius Mela, Syria covered the entire Fertile Crescent. In Late Antiquity Syria meant a region located to the East of the Mediterranean Sea, West of the Euphrates River, North of the Arabian Desert and South of the Taurus Mountains,[2] thereby including modern Syria, Lebanon, Jordan, Israel, the State of Palestine and parts of Southern Turkey namely the Hatay Province and the Western half of the Southeastern Anatolia Region. This late definition is equivalent to the region known in Classical Arabic by the name ash-Shām الشام /ʔaʃ-ʃaːm/,[3] which means the north [country][3] (from the root šʔm شأم "left, north"). After the Islamic conquest of Byzantine Syria in the 7th century AD, the name Syria fell out of primary use in the region itself, being superseded by the Arabic equivalent Shām, but survived in its original sense in Byzantine and Western European usage, and in Syriac Christian literature.[4] In the 19th century the name Syria was revived in its modem Arabic form to denote the whole of Bilad al-Sham, either as Suriyah or the modern form Suriyya, which eventually replaced the Arabic name of Bilad al-Sham.[4] After World War I, the name Syria was applied to the French Mandate for Syria and the Lebanon and the contemporaneous but short-lived Arab Kingdom of Syria.

Throughout history, the region has been controlled by numerous different peoples, including Ancient Egyptians, Canaanites, Assyrians, Babylonians, Persians, Ancient Greeks, Romans, Byzantines, the Umayyad, Abbasid and Fatimid caliphates, the Crusaders, Ayyubids, Mamluks, Ottomans, the British and the French.

The boundaries of the region have changed throughout history, and were last defined in modern times by the proclamation of the short lived Arab Kingdom of Syria and subsequent definition by French and British mandatory agreement. The area was passed to French and British Mandates following World War I and divided into Greater Lebanon, various Syrian-mandate states, Mandatory Palestine and Transjordan. The Syrian-mandate states were gradually unified as the State of Syria and finally became the independent Syria in 1946. Throughout this period, pan-Syrian nationalists advocated for the creation of a Greater Syria.

The name Syria derives from the ancient Greek name for Syrians, Σύριοι Syrioi, which the Greeks applied without distinction to various Near Eastern peoples living under the rule of Assyria. Modern scholarship confirms the Greek word traces back to the cognate Ἀσσυρία, Assyria, ultimately derived from the Akkadian Aššur.[5]

The classical Arabic pronunciation of Syria is Sūriyya (as opposed to the MSA common pronunciation Sūrya). This name was not widely used among Muslims before about 1870, though it had been used by Christians earlier. According to the Syrian Orthodox Church, "Syrian" (sūriy سوري) used to mean "Christian" in early Christianity. In English, "Syrian" historically meant a Syrian Christian (as in, e.g., Ephraim the Syrian). Following the declaration of Syria in 1936, the term "Syrian" became to designate citizens of that state regardless of ethnicity. The adjective "Syriac" (suryāni سرياني) has come into common use since as a demonym to avoid the ambiguity of "Syrian".

To some opinions, the origin of the Hellenistic term Syria is bound in the etymology of the Neo-Assyrian Empire. "Syria" in this wider sense could correspond to "Greater Assyria" and include all of the Levant and Mesopotamia.

Currently, the Arabic term Suriyya refers to the modern state of Syria (as opposed to the historical Syria region), but this distinction was not as clear before the mid 20th-century.

The term etymologically means "land of the left hand", referring to the fact that for someone in the Hejaz facing east, north is to the left (so the name Yemen correspondingly means "land of the right hand").[3] Sham comes from the Arabic consonantal root shin-hamza-mim ش ء م (referring to unluckiness, such as that traditionally associated with the left), as seen in alternative Arabic spellings such as شأم and شآم. There is no connection with the name of Shem son of Noah (which appears in Arabic as sam سام, with a different initial consonant, and without any internal glottal stop consonant), as is sometimes assumed.

The Sham region is sometimes defined as the area that was dominated by Damascus, long an important regional centre — in fact, the Arabic word al-Sham الشام standing on its own can refer to the city of Damascus.

In Greek usage, Syria and Assyria were used almost interchangeably, but in the Roman Empire, Syria and Assyria came to be used as distinct geographical terms. "Syria" in the Roman Empire period referred to "those parts of the Empire situated between Asia Minor and Egypt", i.e. the western Levant, while "Assyria" was part of the Persian Empire, and only very briefly came under Roman control (116-118 AD, marking the historical peak of Roman expansion).

In the Roman era, the term Syria is used to comprise the entire northern Levant and has an uncertain border to the northeast that Pliny the Elder describes as including, from west to east, Commagene, Sophene, and Adiabene, "formerly known as Assyria".[7]

Various writers used the term to describe the entire Levant region during this period; the New Testament used the name in this sense on numerous occasions.[8]

In 64 BC, Syria became a province of the Roman Empire, following the conquest by Pompey. Roman Syria bordered Judaea to the south, Anatolian Greek domains to the north, Phoenicia to the West, and was in constant struggle with Parthians to the East.

In AD 135, Syria-Palaestina became to incorporate the entire Levant and Western Mesopotamia. In AD 193, the province was divided into Syria proper (Syria Coele) and Syria Phoenice. Sometime between 330 and 350 (likely ca. 341), the province of Euphratensis was created out of the territory of Syria Coele and the former realm of Commagene, with Hierapolis as its capital.[9]

After ca. 415 Syria Coele was further subdivided into Syria I, with the capital remaining at Antioch, and Syria II or Salutaris, with capital at Apamea on the Orontes. In 528, Justinian I carved out the small coastal province Theodorias out of territory from both provinces.[10]

The region was annexed to the Islamic Caliphate after the Muslim Rashidun victory over the Byzantine Empire at the Battle of Yarmouk, and became known afterwards by its Arabic name, ash-Shām. During Umayyad times, Shām was divided into five junds or military districts. They were Jund Dimashq, Jund Hims, Jund Filastin and Jund al-Urdunn. Later Jund Qinnasrin was created out of part of Jund Hims. The city of Damascus was the capital of the Islamic Caliphate until the rise of the Abassid Dynasty.

In the later ages of the Ottoman times, it was divided into wilayahs or sub-provinces the borders of which and the choice of cities as seats of government within them varied over time. The vilayets or sub-provinces of Aleppo, Damascus, and Beirut, in addition to the two special districts of Mount Lebanon and Jerusalem. Aleppo consisted of northern modern-day Syria plus parts of southern Turkey, Damascus covered southern Syria and modern-day Jordan, Beirut covered Lebanon and the Syrian coast from the port-city of Latakia southward to the Galilee, while Jerusalem consisted of the land south of the Galilee and west of the Jordan River and the Wadi Arabah. 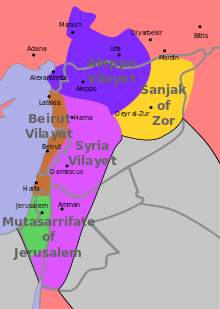 Ottoman Syria until World War I. Present borders in grey.

The Occupied Enemy Territory Administration (OETA) was a military British and French administration over areas of the former Ottoman Empire between 1917–20, during and following World War I. It officially ended following the assignment of the French Mandate of Syria and Lebanon and British Mandate for Palestine at the 19–26 April 1920 San Remo conference.

The Arab Kingdom of Syria was the first modern Arab state to come into existence, but only lasted a little over four months (8 March–24 July 1920). During its brief existence, the kingdom was led by Sharif Hussein bin Ali’s son Faisal bin Hussein. Despite its claims to territory of a Greater Syria, Faisal's government controlled a limited area and was dependent on Britain which, along with France, generally opposed the idea of a Greater Syria and refused to recognise Faisal as its king.[11] The kingdom surrendered to French forces on 24 July 1920.

Following the San Remo conference and the defeat of King Faisal's short-lived monarchy in Syria at the Battle of Maysalun, the French general Henri Gouraud, in breach of the conditions of the mandate, subdivided the French Mandate of Syria into six states. They were the states of Damascus (1920), Aleppo (1920), Alawite State (1920), Jabal Druze (1921), the autonomous Sanjak of Alexandretta (1921) (modern-day Hatay,Turkey), and Greater Lebanon (1920) which later became the modern country of Lebanon.

In the most common historical sense, Syria refers to the entire northern Levant, including Alexandretta and the ancient city of Antioch (the pre-Islamic capital of Syria) or in an extended sense the entire Levant as far south as Roman Egypt, but not including Mesopotamia.

The uncertainty in the definition of the extent of "Syria" is aggravated with the etymological confusion of the similar-sounding names Syria and Assyria. The question of the ultimate etymological identity of the two names remains open today, but regardless of etymology, the two names have often been taken as exchangeable or synonym from the time of Herodotus.[6] In the Roman Empire Syria and Assyria already referred to two separate entities, Roman Syria and Roman Assyria.