The traditional music of Jordan has a long history. Rural zajal songs, with improvised poetry played with a Mijwiz, Tablah, Arghul, Oud, rabab and reed pipe ensemble accompanying is popular. Recently Jordan has seen the rise of several prominent DJs and popstars. 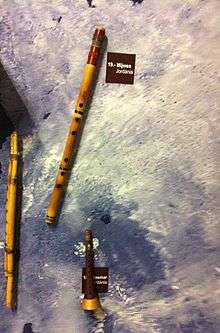 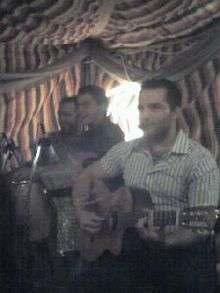 A new age group called RUM has gained regional and international popularity since its inception in 1998, Rum is considered the most successful Jordanian musical group, and has gained a wide range of fans from all over the world, Rum has performed in Tunisia, Morocco, Syria, Palestine, Turkey, Kazakhstan,France, Netherland, Germany, Italy, and the United States. A very important factor that contributed to Rum group's huge success is the fact that the group performs original compositions by Tareq al Nasser (the composer, founder and leader of the group), many of which were composed for Arabic TV drama series that gained wide popularity in the Arab world including the TV Drama series: 'Nihayat Rajol Shuja', 'Al Jawareh' and 'Al Kawaser', 'Al Malek Farouq', 'Yawmeyyat Mudeer Amm', and many others, the group performs instrumentals, songs, and rearranged Jordanian folklore. Rum group has presented Jordan in many international events, one of the most important performances took place at The John Kennedy Center for the Performing Arts in Washington DC back in March 2009 as part of "Arabesque .. Arts of the Arab world" festival in the United States.

Sign of Thyme on the other hand has been gaining Regional popularity with its Oriental-Jazz-Ethnic Fusion, the band has been active since 2004 and till this day produced 2 albums. Many Jordanian singers constantly use Western melodies and fuse it with Middle Eastern music bringing a fresh new generation of music.The controversial female singer, Malak El Nasser, known for her extremely seductive video clips is another popular Jordanian singer.

In Amman, the capital of Jordan, there has been a movement of alternative music in the last two decades. Rock bands that mix western and eastern influences are continuously becoming more popular. Ethereal was a famous oriental rock band early this decade, they were the first band in Jordan to have a large base of fans, their music was played on local radios. They ranked first when they presented Jordan in the European youth festival in Turkey in the year 1999. At the present there are some popular bands in Jordan such as JadaL, DistorteD, Murjan and Illusions - who are famous for their pure classic rock style. Although not based in Jordan Hard rock guitarist Naser Mestarihi is Jordanian on his father's side. The alternative music scene in Jordan boomed after 2008 with appearance of post rock band El Morabba3, and other bands such at Autostrad, Akher Zapheer and others.

One of the most important musicians in Jordan are the Faqir family which extends for more than 100 years. Jordan's western radio station, Play 99.6, works towards exposing new local artists, including many western pop singers such as Humam Ammari, Al'a Ayyoub, and Walid Karadsheh.

The thriving Indie rock scene was achieved thanks to artists such as Kais Khoury, Ibrahim Baggili, Hani Mitwasi and Yousef Kawar, as well as the Cowboys from Jordan; a band managed by Yousef Kawar himself. Other notable genres in Jordan are Hip Hop; which was popularized through DJ Shadia (Shadia Bseiso) through her regional radio show "The 5th Element" which was the only show in the Middle East to broadcast in three different countries every week (Jordan, Lebanon and Syria) from 2005 to 2008. DJ Shadia had previously opened for global stars such as Akon, 50 Cent, Sean Paul and Massari. Other popular Hip Hop artists include Last Standing Poet and MC Niz-r.

As of recent times, Jordan's electronic music scene is rising rapidly within the Jordanian youth, house have become staples in the musical tastes in Jordan. Many raves and underground techno gatherings occur, and electronic music is currently reaching number one status of music genre in Jordan.