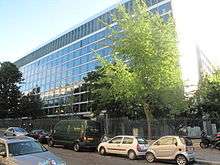 Engie (known as GDF Suez prior to April 2015[2]) is a French multinational electric utility company, headquartered in La Défense, Courbevoie, which operates in the fields of electricity generation and distribution, natural gas and renewable energy. The company is a component of the Euro Stoxx 50 stock market index.[3]

The company, formed on 22 July 2008 by the merger of Gaz de France and Suez, traces its origins to the Universal Suez Canal Company founded in 1858 to construct the Suez Canal. Since the merger in 2008, the French state holds approximately a third of the company.[4] It adopted the "Engie" name in April 2015 in order to emphasize the changing nature of its energy business and de-emphasize its historical role as a nationalized gas monopoly.[5]

The company holds a 35% stake in Suez Environnement, the water treatment and waste management company spun off from Suez at the time of the merger.[6] GDF Suez bought 70% of Britain's International Power in August 2010, creating the world's largest independent utility company.[7][8] The purchase of the remaining 30% was announced by GDF Suez in April 2012, and the transaction completed in July 2012.[9][10] On July 1 2015, the company announced the acquisition of solar parks developer Solairedirect, which makes it the largest solar power electricity producer in France.[11]

As of 2015, Engie employs 154,950 people worldwide with revenues of €69.9 billion. Engie is listed on the Euronext exchanges in Paris and Brussels and is a constituent of the CAC 40 and BEL20 indices.

Prior to the GDF Suez merger plans in 2006, the company existed as two separate French multinational corporations - Suez S.A. and Gaz de France, with a heritage tracing two centuries.

Suez was (and still remains, through GDF Suez as) one of the oldest continuously existing multinational corporations in the world as the result of nearly two centuries of reorganisation and corporate mergers. One line of corporate history dates back to the 1822 founded Algemeene Nederlandsche Maatschappij ter begunstiging van de volksvlijt (literally: General Dutch Company for the favouring of industry) by King William I of the Netherlands (see Société Générale de Belgique). The origin of its name 'Suez' traces back to its another founding entity – the Compagnie universelle du canal maritime de Suez founded in 1858 to build the Suez Canal. Suez S.A. was the result of a 1997 merger between the Compagnie de Suez and Lyonnaise des Eaux.

Gaz de France was created in 1946 along with its sister company Électricité de France (EDF) by the French Government. After the liberalisation of Europe’s energy markets, Gaz de France also entered into the electricity sector, having developed combined natural gas-electricity offerings. The company's capital was partially floated on the Paris Stock Exchange in July 2005, raising €2.5 billion for the French Government.[12]

On 25 February 2006, French Prime minister Dominique de Villepin announced the merger of water supply and treatment, waste management and energy company Suez and power firm Gaz de France, with the aim of creating the world's largest liquefied natural gas company.[13] Since the French state owned over 80% of Gaz de France, it was necessary to pass a new law in order to make the merger possible. Whilst Nicolas Sarkozy was for several months opposed to the Villepin government’s plans for a merger of the two companies, preferring a three-way deal with Italy's Enel which would maintain a controlling stake for the state,[14] he subsequently accepted the government proposal.[15]

The plan for a merger between Gaz de France and Suez came under fire from the whole of the political left,[16] which feared the loss of one of the last ways of preventing the price rises experienced over the previous three years, and by the social Gaullists and trade unions.[17][18] In August 2006, the left-wing opposition submitted a record-breaking 137,449 amendments to the proposed legislation. Under normal procedure, parliament would have been required to vote on the amendments, which would have taken 10 years.[19] The French Constitution does give the government options to bypass such a filibuster, but in the end these were not used.[20]

Law No. 2006-1537 of 7 December 2006 on the energy sector authorised the privatisation of Gaz de France. On 3 September 2007, Gaz de France and Suez announced agreed terms of merger, on the basis of an exchange of 21 Gaz de France shares for 22 Suez shares via the absorption of Suez by Gaz de France.[21] Various holdings of Gaz de France and Suez had to be divested in order to satisfy the concerns of the European Commissioner for Competition: GDF agreed to sell its approximate 25% stake in Belgian electricity producer SPE for €515 million. The stake was purchased by fellow SPE shareholder Centrica which exercised its right of first refusal,[22] blocking a previous agreement to sell the stake to Électricité de France.[23] Suez, meanwhile, was forced to reduce its shareholding in natural gas distributor Fluxys[24] and sell its Belgian gas supply subsidiary Distrigas to Eni.[25]

The newly created GDF Suez came into existence on 22 July 2008; the world's second-largest utility with over €74 billion in annual revenues.[26] The deal resulted in the conversion of the French state's 80% stake in GDF into just over 35% of shares of the new company. The water and waste assets which formerly formed part of Suez were spun off into a new publicly traded company, Suez Environment, in which GDF Suez retains a stake.

In 1975, Ruhrgas and Gaz de France concluded a deal according to which they agreed not to sell gas in each other's home market. The deal was abandoned in 2005.[27]

In October 2009, GDF Suez placed 6th in an A.T. Kearney/BusinessWeek ranking of the "World's Best Companies", the highest-placed European firm.[30]

On 10 August 2010, the company announced a merger of its GDF SUEZ Energy International business unit, along with its operations within the United Kingdom and Turkey, with International Power. The acquisition created the world’s biggest independent power producer, and the enlarged company will retain International Power's listing on the London Stock Exchange and be 70% owned by GDF Suez.[7][8][31]

In December 2010, GDF SUEZ became the key founding member of the 'Medgrid' company[32] - a consortium of twenty plus utilities, grid operators, equipment makers, financing institutions and investors; which will implement the 'Medgrid project', a French renewable energy initiative within the framework of the Union for the Mediterranean (UfM). The project, planned in North Africa, aims to promote and develop a Euro-Mediterranean electricity network of 20GW installed generating capacity, with 5GW being devoted for exports to Europe. The Medgrid together with the German initiated Desertec project[33] would serve as the backbone of the European Supergrid.[34][35]

On 16 April 2012, the purchase of the remaining 30% of International Power was announced by GDF Suez, and the transaction completed in July 2012.[9] GDF Suez was advised by Rothschild and Ondra Partners, while Barclays, Morgan Stanley and Nomura advised International Power.[9][10]

On 9 August 2013, GDF Suez, through its Energy Services business line, announced the purchase of Balfour Beatty’s UK Facilities Management business – Balfour Beatty WorkPlace. The legacy Cofely business incorporated the legacy Balfour Beatty Workplace Business which went on to aqquire Lend Lease FM in 2014 from Lend Lease Group giving the new business a substantial platform in the operation of PFI assets in the UK.

On April 24, 2015, GDF Suez announced it has changed its name to "Engie", in an effort to further expand the company's international footprint. CEO and Chairman Gérard Mestrallet said the new name was a symbol to meet the challenges of the energy transition and accelerate the group's development.[36]

Thanks to former Suez subsidiaries such as Compagnie Nationale du Rhône (CNR), Electrabel and Société Hydro Electrique du Midi (SHEM), GDF Suez is the second-largest generator of electricity in France[39] behind EDF.[40] The company indicated in December 2011 that ¾ of the group's production comes from sources that emit no CO2 principally hydroelectricity (through CNR and SHEM) and wind power, the latter of which both Gaz de France and Suez moved aggressively into in 2007 and 2008.[41] Recently acquired subsidiaries include La Compagnie du Vent (majority stake),[42] the wind farm business of Nass & Wind[43] and Erelia.[44] The company also operates a natural gas-fired combined cycle power plant (DK6) in Dunkirk. With the stated aim of reaching a total production capacity of 10 GW by 2013, three gas-fired thermal power plants at Fos-sur-Mer, Montoir-de-Bretagne and Saint-Brieuc are currently in various stages of development, as is a solar panel project in Curbans.[41]

The GDF Suez group also generates electricity in a number of countries outside France. Most notably, the company is the leading producer in both Belgium and the Netherlands through Electrabel[45] (and the fifth-largest generator in Europe overall),[46] as well as the largest non-state owned generator in both Brazil[47] and Thailand[48] (thanks to majority stakes in ENGIE Brasil and Glow Energy respectively). GDF Suez also holds a 50% stake in NuGeneration (NuGen), a company planning to build a new nuclear power station of up to 3.6 GW capacity at Sellafield in the United Kingdom.[49] The other 50% of NuGen is held by Iberdrola. The company also operates in North and Latin America through its Suez Energy International unit, as well as in other European and Asian countries. The company generates electricity through various types of plants, including thermal power, nuclear power, combined heat and power, wind farms, hydroelectric and biomass.[50] Engie is currently developing a $15.8 billion nuclear power plant in Sinop, Turkey in partnership with Itochu and Mitsubishi Heavy Industries.[51]

In November 2016, Engie signed an agreement with Moroccan energy company Nareva. The two companies are planning to develop energy assets in North and Western Africa that will produce 5,000 and 6,000 megawatts. The plans will take place between 2020 and 2025.[52]

In October 2015, Engie announced that it will no longer build coal-fired power plants. Gérard Mestrallet said projects for which Engie had already entered into firm commitments would be honored, but projects where contracts had not yet been signed will de facto be suspended. As a result, Engie abandoned two coal-fired power plants projects in Ada Yumurtalik (Turkey) and in Thabametsi (South Africa).[53] In February 2016, Engie announced the selling of its stakes in the Paiton power plant located in Indonesia and in the Meenakshi power plant located in India.[54] Engie also announced the closing of the Rugeley power station in England.[55]

In May 2016 Engie CEO Isabelle Kocher told a French Senate committee that it was planning a gradual withdrawal from coal-fired generation over the coming years. This could include closure of, or sale of its stake in, the lignite-fired Hazelwood power station in Victoria, Australia.[56]

Engie covers the whole gas chain, from exploration and production to distribution. It is the:

Engie provides energetic efficiency and environmental services. 90,000 of the group's employees are dedicated to services.

Engie is administered by a Board of Directors of 19 members. The Board is backed by the recommendations of four specialized committees.

The members of the group executive committee are:[59]

As from 1 October 2016 they will be joined by Ana Busto who has been newly appointed as Senior Vice President, Brand and Communications of the Engie Group, reporting to Chief Executive Officer Isabelle Kocher.[60]