The Brussels Stock Exchange (French: Bourse de Bruxelles, Dutch: Beurs van Brussel), abbreviated to BSE, was founded in Brussels, Belgium, by decree of Napoleon in 1801. On 22 September 2000, the BSE merged with Paris Bourse, Lisbon Stock Exchange and the stock exchanges of Amsterdam, to form Euronext N.V., the first pan-European exchange for equities and derivatives, with common trading and clearing of all products, and was renamed Euronext Brussels. The most well known index on the Brussels Stock Exchange is the BEL20. It now belongs to the NYSE Euronext group, the first global stock exchange. 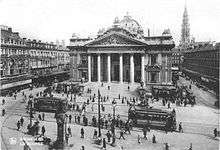 The building that houses the Brussels Stock Exchange does not have a distinct name, though it is usually called simply the Bourse/Beurs. It is located on Boulevard Anspach, and is the namesake of the Place de la Bourse/Beursplein, which is, after the Grand Place, the second most important square in Brussels.

As part of the covering of the river Senne for health and aesthetic reasons in the 1860s and 1870s, a massive program of beautification of the city centre was undertaken. Architect Léon-Pierre Suys, as part of his proposal for covering of the Senne, designed a building to become the centre of the rapidly expanding business sector. It was to be located on the former butter market, (itself situated on the ruins of the former Recollets Franciscan convent) on the newly created Anspach Boulevard (then called Central Boulevard).

The building was erected from 1868 to 1873, and mixes elements of the Neo-Renaissance and Second Empire architectural styles. It has an abundance of ornaments and sculptures, created by famous artists, including the brothers Jacques and Joseph Jacquet, Guillaume de Groot, French sculptor Albert-Ernest Carrier-Belleuse and his then-assistant Auguste Rodin.