The borough's formation dates back to an election for Road Commissioner in Road District 1 between William Outis Allison and Clinton Blake, a future mayor of Englewood. Blake won the vote, but Allison challenged the result, arguing that women had been improperly allowed to vote. The vote was overturned, but Englewood officials would not seat Allison, which ultimately led to his successful efforts in 1895 to have Road District 1 secede to form the Borough of Englewood Cliffs, with Allison serving as the new municipality's first mayor.[23]

Englewood Cliffs was formed as a borough on May 10, 1895, from portions of the now defunct townships of Englewood Township and Palisades Township, based on the results of a referendum held the previous day.[24][25] The borough was formed during the "Boroughitis" phenomenon then sweeping through Bergen County, as of one two boroughs created in 1895 after 26 boroughs had been formed in the county in 1894 alone.[26] 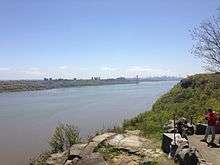 The borough borders Englewood, Fort Lee and Tenafly in Bergen County, and the New York City boroughs of The Bronx and Manhattan across the Hudson River.[27]

Korean Americans accounted for 20.3% of the borough's population.[8] Englewood Cliffs has witnessed expansion of this demographic from the adjoining Fort Lee Koreatown (포트 리 코리아타운), as well as from the borough's status as the North American headquarters of the LG Corporation, based in Seoul.[39]

LG Electronics held a groundbreaking ceremony on November 14, 2013 to build an environmentally friendly North American headquarters in Englewood Cliffs, having received a favorable legal decision subsequently being appealed based upon building height issues. Protesters have sharply criticized the proposal, arguing that the 143-foot (44 m) height of the building exceeds the borough's 35-foot (11 m) limit and that the height of the building above the tree line will disrupt views of the Palisades.[49]

Englewood Cliffs is governed under the Borough form of New Jersey municipal government. The governing body consists of a Mayor and a Borough Council comprising six council members, with all positions elected at-large on a partisan basis as part of the November general election. A Mayor is elected directly by the voters to a four-year term of office. The Borough Council consists of six members elected to serve three-year terms on a staggered basis, with two seats coming up for election each year in a three-year cycle.[3][50] The Borough form of government used by Englewood Cliffs, the most common system used in the state, is a "weak mayor / strong council" government in which council members act as the legislative body with the mayor presiding at meetings and voting only in the event of a tie. The mayor can veto ordinances subject to an override by a two-thirds majority vote of the council. The mayor makes committee and liaison assignments for council members, and most appointments are made by the mayor with the advice and consent of the council.[51][52]

Englewood Cliffs is located in the 9th Congressional District[62] and is part of New Jersey's 37th state legislative district.[9][63][64]

For the 2016–2017 session (Senate, General Assembly), the 37th Legislative District of the New Jersey Legislature is represented in the State Senate by Loretta Weinberg (D, Teaneck) and in the General Assembly by Valerie Huttle (D, Englewood) and Gordon M. Johnson (D, Englewood).[69] The Governor of New Jersey is Chris Christie (R, Mendham Township).[70] The Lieutenant Governor of New Jersey is Kim Guadagno (R, Monmouth Beach).[71]

Emergency medical services (EMS) are provided to the borough of Englewood Cliffs by Englewood Hospital and Medical Center under the terms of an agreement between the borough and the hospital.

The borough had been served by the Englewood Cliffs Volunteer Ambulance Corps, which was staffed by trained and certified Emergency Medical Technicians who were on call from 7:00 PM to 6:00 AM on weekdays and 24/7 on weekends. ECVAC maintained three vehicles, two Ford Type-III ambulances and a Chevy Tahoe SUV and responded to an average of over 300 medical emergencies each year. The ECVAC was disbanded in August 2012 by the Mayor and Council of Englewood Cliffs, citing delays in providing prompt emergency response to borough residents due to the lack of volunteers.[98]

The Englewood Cliffs Public Schools serve children in pre-Kindergarten through eighth grade. As of the 2011-12 school year, the district's two schools had an enrollment of 364 students and 43.4 classroom teachers (on an FTE basis), for a student–teacher ratio of 8.39:1.[99] Schools in the district (with 2011-12 enrollment data from the National Center for Education Statistics[100]) are North Cliff School[101] with 169 students in grades PreK–2 and Upper School[102] with 195 students in grades 3–8.[103]

The school district has a sending/receiving relationship with the Englewood Public School District under which students attend public high school at Dwight Morrow High School in Englewood.[104] As of the 2013-14 school year, the school had an enrollment of 1,069 students and 94.0 classroom teachers (on an FTE basis), for a student–teacher ratio of 11.4:1.[105]

Public school students from the borough, and all of Bergen County, are eligible to attend the secondary education programs offered by the Bergen County Technical Schools, which include the Bergen County Academies in Hackensack, and the Bergen Tech campus in Teterboro or Paramus. The district offers programs on a shared-time or full-time basis, with admission based on a selective application process and tuition covered by the student's home school district.[106][107]

Since 1975, Englewood Cliffs has been home to a campus of Saint Peter's University, where evening and weekend classes are offered for Associate's degrees, Bachelor's degrees, and graduate degrees. The college's nursing program for registered nurses is also located at the campus. Previously, the campus had been home to Englewood Cliffs College, which closed in 1974.[108]

The borough does not have its own public library. After a 47-year-long relationship with the Englewood Public Library under which the borough paid $225,000 to allow borough residents to use the city's library, Englewood Cliffs started negotiations in 2016 with other municipalities to pay for privileges elsewhere.[109]

U.S. Route 9W[111] and the Palisades Interstate Parkway[112] both run alongside each other for about 2.8 miles (4.5 km) along the Hudson River from Fort Lee in the south to Tenafly in the north. County Route 505 (Hudson Terrace / Palisades Avenue) travels through the borough from Fort Lee in the south to Englewood in the east.[113] Motorists can also take a scenic drive along Henry Hudson Drive at the Palisades Interstate Park, which is accessible via Dyckman Hill Road.[114]

People who were born in, residents of, or otherwise closely associated with Englewood Cliffs include: 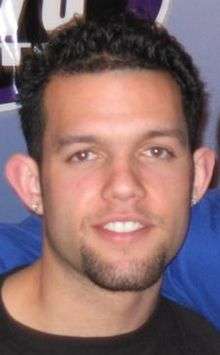 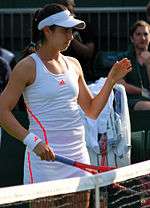