The native form of this personal name is László Ervin. This article uses the Western name order. 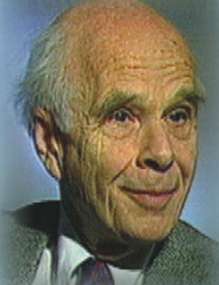 Ervin László (Hungarian pronunciation: [ˈɛrvin ˈlaːsloː]; born 12 June 1932) is a Hungarian philosopher of science, systems theorist, integral theorist, originally a classical pianist. He is an advocate of the theory of quantum consciousness.[1]

László was born in Budapest, Hungary, the son of a shoe manufacturer and a mother who played the piano; László himself started playing the piano when he was five years old, and gave his first piano concert with the Budapest Symphony Orchestra at the age of nine. At the end of the war he came to the United States.[2]

László is a visiting faculty member at the Graduate Institute Bethany. He has published about 75 books and over 400 papers, and is editor of World Futures: The Journal of General Evolution.

In 2002, László received an honorary doctorate[3] from the University of Pécs. He participated in the Stock Exchange of Visions project in 2006. In 2010, he was elected an external member of the Hungarian Academy of Sciences.

In Hungary, the minister of environment appointed Laszlo as one of the leaders of the ministry's campaign concerning global warming.[4]

In 1984, László was co-founder with Béla H. Bánáthy, Riane Eisler, John Corliss, Francisco Varela, Vilmos Csanyi, Gyorgy Kampis, David Loye, Jonathan Schull and Eric Chaisson of the initially secret General Evolutionary Research Group.[5][6] Meeting behind the Iron Curtain, the group of scientists and thinkers from a variety of disciplines met in secret. Their goal was to explore whether it might be possible to use the chaos theory to identify a new general theory of evolution that might serve as a path to a better world.

In 1993, in response to his experience with the Club of Rome, he founded the Club of Budapest to, in his words, "centre attention on the evolution of human values and consciousness as the crucial factors in changing course — from a race towards degradation, polarization and disaster to a rethinking of values and priorities so as to navigate today's transformation in the direction of humanism, ethics and global sustainability".[7]

László's 2004 book, Science and the Akashic Field: An Integral Theory of Everything posits a field of information as the substance of the cosmos. Using the Sanskrit and Vedic term for "space", Akasha, he calls this information field the "Akashic field" or "A-field". He posits that the "quantum vacuum" (see Vacuum state) is the fundamental energy and information-carrying field that informs not just the current universe, but all universes past and present (collectively, the "Metaverse").

László believes that such an informational field can explain why our universe appears to be fine-tuned so as to form galaxies and conscious lifeforms; and why evolution is an informed, not random, process. He believes that the hypothesis solves several problems that emerge from quantum physics, especially nonlocality and quantum entanglement.

László became interested in the consciousness theories of Anthony Peake, (who in turn was an admirer of László’s work on the Akashic Field). Peake, whose background was in the social sciences,[8] had sought to explain the fact that altered states of consciousness (such as deja vu, dreams, psychedelic drug experiences, meditation, near death experience) sometimes seem to feature precognition and premonitions.[9] Peake had produced a tentative synthesis of the ancient idea of the “Eternal Return” with modern ideas like the simulation argument, the holographic universe, and the many worlds interpretation. In Peake’s hypothesis, one lives variants of the same life repeatedly, and a premonition is in fact a memory of the past.[10] Peake became a Consciousness Studies Department Member at Ervin László’s Center For Advanced Studies.[11] László collaborated with Anthony Peake on the book The Immortal Mind: Science and the Continuity of Consciousness Beyond the Brain.[12]

In his book You Can Change the World, László promotes a linking of non-government organizations promoting sustainable development, using the Internet.[13]

László has written an autobiography entitled Simply Genius! And Other Tales from My Life, published by Hay House Publishers in June 2011.[14]

In an essay, Stanislav Grof compared László's work to that of Ken Wilber, saying "Where Wilber outlined what an integral theory of everything should look like, Laszlo actually created one."[15]