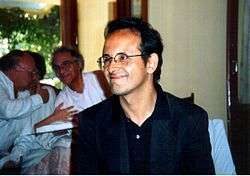 Francisco Javier Varela García (September 7, 1946 – May 28, 2001) was a Chilean biologist, philosopher, and neuroscientist who, together with his teacher Humberto Maturana, is best known for introducing the concept of autopoiesis to biology, and for co-founding the Mind and Life Institute to promote dialog between science and Buddhism.

Varela was born in 1946 in Santiago in Chile, the son of Corina María Elena García Tapia and Raúl Andrés Varela Rodríguez.[1] After completing secondary school at the Liceo Aleman del Verbo Divino in Santiago (1951–1963), like his mentor Humberto Maturana, Varela first studied temporarily medicine at the Pontifical Catholic University of Chile to graduate in biology at the University of Chile, and later obtain a Ph.D. in biology at Harvard University. His thesis, defended in 1970 and supervised by Torsten Wiesel, was titled Insect Retinas: Information processing in the compound eye.

After the 1973 military coup led by Augusto Pinochet, Varela and his family spent 7 years in exile in the United States before he returned to Chile to become a professor of biology.

In 1986, he settled in France, where he at first taught cognitive science and epistemology at the École Polytechnique, and neuroscience at the University of Paris. From 1988 until his death, he led a research group at the CNRS (Centre National de Recherche Scientifique).

In 1987, Varela, along with R. Adam Engle, founded the Mind and Life Institute, initially to sponsor a series of dialogues between scientists and His Holiness The Dalai Lama about the relationship between modern science and Buddhism.[2] The Institute continues today as a major nexus for such dialog as well as promoting and supporting multidisciplinary scientific investigation in mind sciences, contemplative scholarship and practice and related areas in the interface of science with meditation and other contemplative practices, especially Buddhist practices.[3]

Varela died in 2001 in Paris of Hepatitis C after having written an account of his 1998 liver transplant.[4] Varela had four children, including the actress, environmental spokesperson, and model Leonor Varela.

Varela trained as a biologist, fundamentally influenced by his teacher and fellow Chilean, Humberto Maturana. Both biologists had strong philosophical orientations.

He wrote and edited a number of books and numerous journal articles in biology, neurology, cognitive science, mathematics, and philosophy. He founded, with others, the Integral Institute, a thinktank dedicated to the cross-fertilization of ideas and disciplines.

Varela supported embodied philosophy, viewing human cognition and consciousness in terms of the enactive structures in which they arise. These comprise the body (as a biological system and as personally experienced) and the physical world with which it interacts. [5]

He introduced into neuroscience the concepts of neurophenomenology. This combined the phenomenology of Edmund Husserl and of Maurice Merleau-Ponty, with "first person science" . The outcome entails that observers examine their own conscious experience using scientifically verifiable methods.