Everett M. Rogers (March 6, 1931 – October 21, 2004) was a communication scholar, sociologist, writer, and teacher. He originated the diffusion of innovations theory and introduced the term early adopter.

Rogers was born on his family's Pinehurst Farm in Carroll, Iowa, in 1931. His father loved electromechanical farm innovations, but was highly reluctant to utilize biological–chemical innovations, so he resisted adopting the new hybrid seed corn, even though it yielded 25% more crop and was resistant to drought. During the Iowa drought of 1936, while the hybrid seed corn stood tall on the neighbor’s farm, the crop on the Rogers' farm wilted. Rogers' father was finally convinced.[1]

Rogers had no plans to attend university until a school teacher drove him and some classmates to Ames to visit Iowa State University. Rogers decided to pursue a degree in agriculture there. He then served in the Korean War for two years. He returned to Iowa State University to earn a Ph.D. in sociology and statistics in 1957. 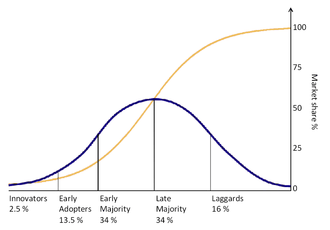 The diffusion of innovations according to Rogers. With successive groups of consumers adopting the new technology (shown in blue), its market share (yellow) will eventually reach the saturation level.

When the first edition of Diffusion of Innovations was published in 1962, Rogers was an assistant professor of rural sociology at Ohio State University. He was only 30 years old but was becoming a renowned academic figure. In the mid-2000s, The Diffusion of Innovations became the second-most-cited book in the social sciences. (Arvind Singhal: Introducing Professor Everett M. Rogers, 47th Annual Research Lecturer, University of New Mexico) . The fifth edition (2003, with Nancy Singer Olaguera) addresses the spread of the Internet, and how it has transformed the way human beings communicate and adopt new ideas.

Rogers proposes that adopters of any new innovation or idea can be categorized as innovators (2.5%), early adopters (13.5%), early majority (34%), late majority (34%) and laggards (16%), based on the mathematically based Bell curve. These categories, based on standard deviations from the mean of the normal curve, provide a common language for innovation researchers. Each adopter's willingness and ability to adopt an innovation depends on their awareness, interest, evaluation, trial, and adoption. People can fall into different categories for different innovations—a farmer might be an early adopter of mechanical innovations, but a late majority adopter of biological innovations or VCRs.

When graphed, the rate of adoption formed what came to typify the Diffusion of Innovations model, a logistic curve) The graph shows a cumulative percentage of adopters over time – slow at the start, more rapid as adoption increases, then leveling off until only a small percentage of laggards have not adopted.[2]

His research and work became widely accepted in communications and technology adoption studies, and also found its way into a variety of other social science studies. Rogers was also able to relate his communications research to practical health problems, including hygiene, family planning, cancer prevention, and drunk driving.

In the early 1990s Rogers turned his attention to the field of Entertainment-Education. With funding from Population Communications International, he evaluated a radio drama designed to improve public health in Tanzania called Twende na Wakati (Let’s Go With the Times). [3] With Arvind Singhal of Ohio University he co-wrote Entertainment Education: A Communication Strategy for Social Change.

To commemorate his contributions to the field, the University of Southern California Norman Lear Center established the Everett M. Rogers Award for Achievement in Entertainment-Education, which recognizes outstanding practice or research in the field of entertainment education.

In 1995, Rogers moved to the University of New Mexico, having become fond of Albuquerque while stationed at an airbase during the Korean War. He helped UNM launch a doctoral program in communication. He was Distinguished Professor Emeritus at UNM.

Rogers suffered from kidney disease and retired from UNM in the summer of 2004. He died a few months later, survived by his wife, Dr. Corinne Shefner-Rogers, and two sons: David Rogers and Everett King.