Attribution is the process in which people look for an explanation of another person's behavior. When someone does not understand another, he/she usually blames the confusion on the other's "stupidity, deceit, or craziness".

Effective communication depends on the informal understandings among the parties involved that are based on the trust developed between them. When trust exists, there is implicit understanding within communication, cultural differences may be overlooked, and problems can be dealt with more easily. The meaning of trust and how it is developed and communicated vary across societies. Similarly, some cultures have a greater propensity to be trusting than others.

Nonverbal communication is behavior that communicates without words—though it often may be accompanied by words. Minor variations in body language, speech rhythms, and punctuality often cause mistrust and misperception of the situation among cross-cultural parties.

Kinesic behavior is communication through body movement—e.g., posture, gestures, facial expressions and eye contact. The meaning of such behavior varies across countries.

Occulesics are a form of kinesics that includes eye contact and the use of the eyes to convey messages.

Proxemics concern the influence of proximity and space on communication (e.g., in terms of personal space and in terms of office layout). For example, space communicates power in the US and Germany.

Paralanguage refers to how something is said, rather than the content of what is said—e.g., rate of speech, tone and inflection of voice, other noises, laughing, yawning, and silence.

Object language or material culture refers to how we communicate through material artifacts—e.g., architecture, office design and furniture, clothing, cars, cosmetics, and time. In monochronic cultures, time is experienced linearly and as something to be spent, saved, made up, or wasted. Time orders life, and people tend to concentrate on one thing at a time. In polychronic cultures, people tolerate many things happening simultaneously and emphasize involvement with people. In these cultures, people may be highly distractible, focus on several things at once, and change plans often.

These factors, combined with the person's cultural and racial identity and level of preparedness for change, comprise that person's potential for adaptation.

The following types of theories can be distinguished in different strands: focus on effective outcomes, on accommodation or adaption, on identity negotiation and management, on communication networks, on acculturation and adjustment.[4]

The theory, rooted in semiotics, studies how relational distance can have an impact on intercultural communication: incommunicability and misunderstandings are strictly dependent from the feeling of "closeness" or "distance" that emerges in the interaction patterns between intercultural communicators. The 4 Distances Model defines the four main variables that can determine relational distance. Each variable has a subset of more specific hard-type (more tangible) and soft-type (mainly intangible) sub-variables:[10]

The model enables the research and monitoring on how intercultural interactions shift in time from "distance" to "closeness", or vice versa, from empathy to conflict, and from entropy to clarity, on which specific variables, and with which effects, in order to prepare specific interventions that reduce unwanted distances, conflict and miscommunications. Identifying hidden perceptions, roles, codes and values is substantial to determine the effectiveness of intercultural negotiations,[11] and the outcome of intercultural key-leader engagement as in peacekeeping operations.[12] The model has been used to analyze critical incidents in communication in intercultural crews in the International Space Station,[13] and in the analysis of communication misunderstandings that generated deadly accidents, in the case of miscommunications in intercultural crews and communication deceptions of the Costa Concordia disaster.[14][15]

Competent communication is an interaction that is seen as effective in achieving certain rewarding objectives in a way that is also related to the context in which the situation occurs. In other words, it is a conversation with an achievable goal that is used at an appropriate time/location.[25]

The following are ways to improve communication competence:

The way a message is received is dependent on these factors as they give a greater interpretation for the receiver as to what is meant by the message. By emphasizing a certain phrase with the tone of voice, this indicates that it is important and should be focused more on.

Along with these attributes, verbal communication is also accompanied with non-verbal cues. These cues make the message clearer and give the listener an indication of what way the information should be received.[28]

In terms of intercultural communication there are language barriers which are effected by verbal forms of communication. In this instance there is opportunity for miscommunication between two or more parties.[29] Other barriers that contribute to miscommunication would be the type of words chosen in conversation. do to different cultures there are different meaning in vocabulary chosen, this allows for a message between the sender and receiver to be misconstrued.[30]

Nonverbal communication is behaviour that communicates without words—though it may often be accompanied by words. Nonverbal behaviour can include things such as 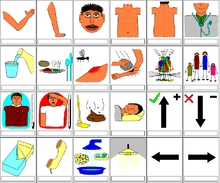 Nonverbal communication techniques used around the world and in multiple cultures.