The biochemical capacity to use water as the source for electrons in photosynthesis evolved once, in a common ancestor of extant cyanobacteria.[2] The geological record indicates that this transforming event took place early in Earth's history, at least 2450–2320 million years ago (Ma), and, it is speculated, much earlier.[3][4] Available evidence from geobiological studies of Archean (>2500 Ma) sedimentary rocks indicates that life existed 3500 Ma, but the question of when oxygenic photosynthesis evolved is still unanswered. A clear paleontological window on cyanobacterial evolution opened about 2000 Ma, revealing an already-diverse biota of blue-greens. Cyanobacteria remained principal primary producers throughout the Proterozoic Eon (2500–543 Ma), in part because the redox structure of the oceans favored photoautotrophs capable of nitrogen fixation. Green algae joined blue-greens as major primary producers on continental shelves near the end of the Proterozoic, but only with the Mesozoic (251–65 Ma) radiations of dinoflagellates, coccolithophorids, and diatoms did primary production in marine shelf waters take modern form. Cyanobacteria remain critical to marine ecosystems as primary producers in oceanic gyres, as agents of biological nitrogen fixation, and, in modified form, as the plastids of marine algae.[5]

Fossils of what are thought to be filamentous photosynthetic organisms have been dated at 3.4 billion years old.[6][7]

Symbiosis and the origin of chloroplasts

Plant cells with visible chloroplasts (from a moss, Plagiomnium affine)

Several groups of animals have formed symbiotic relationships with photosynthetic algae. These are most common in corals, sponges and sea anemones. It is presumed that this is due to the particularly simple body plans and large surface areas of these animals compared to their volumes.[8] In addition, a few marine mollusks Elysia viridis and Elysia chlorotica also maintain a symbiotic relationship with chloroplasts they capture from the algae in their diet and then store in their bodies. This allows the mollusks to survive solely by photosynthesis for several months at a time.[9][10] Some of the genes from the plant cell nucleus have even been transferred to the slugs, so that the chloroplasts can be supplied with proteins that they need to survive.[11]

A 2010 study by researchers at Tel Aviv University discovered that the Oriental hornet (Vespa orientalis) converts sunlight into electric power using a pigment called xanthopterin. This is the first scientific evidence of a member of the animal kingdom engaging in photosynthesis.[15] 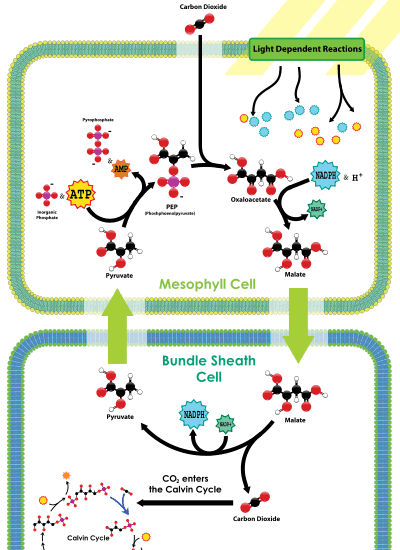 Photosynthesis is not quite as simple as adding water to CO2 to produce sugars and oxygen. A complex chemical pathway is involved, facilitated along the way by a range of enzymes and co-enzymes. The enzyme RuBisCO is responsible for "fixing" CO2 – that is, it attaches it to a carbon-based molecule to form a sugar, which can be used by the plant, releasing an oxygen molecule along the way. However, the enzyme is notoriously inefficient, and just as effectively will also fix oxygen instead of CO2 in a process called photorespiration. This is energetically costly as the plant has to use energy to turn the products of photorespiration back into a form that can react with CO2.

The C4 metabolic pathway is a valuable recent evolutionary innovation in plants, involving a complex set of adaptive changes to physiology and gene expression patterns.[16] About 7600 species of plants use C4 carbon fixation, which represents about 3% of all terrestrial species of plants. All these 7600 species are angiosperms.

One type of C4 metabolism employs a so-called Kranz anatomy. This transports CO2 through an outer mesophyll layer, via a range of organic molecules, to the central bundle sheath cells, where the CO2 is released. In this way, CO2 is concentrated near the site of RuBisCO operation. Because RuBisCO is operating in an environment with much more CO2 than it otherwise would be, it performs more efficiently.

A second mechanism, CAM photosynthesis, is a carbon fixation pathway that evolved in some plants as an adaptation to arid conditions.[17][18] The most important benefit of CAM to the plant is the ability to leave most leaf stomata closed during the day.[19] This reduces water loss due to evapotranspiration. The stomata open at night to collect CO2, which is stored as the four-carbon acid malate, and then used during photosynthesis during the day. The pre-collected CO2 is concentrated around the enzyme RuBisCO, increasing photosynthetic efficiency. More CO2 is then harvested from the atmosphere when stomata open, during the cool, moist nights, reducing water loss.

CAM has evolved convergently many times.[20] It occurs in 16,000 species (about 7% of plants), belonging to over 300 genera and around 40 families, but this is thought to be a considerable underestimate.[21] It is found in quillworts (relatives of club mosses), in ferns, and in gymnosperms, but the great majority of plants using CAM are angiosperms (flowering plants).

These two pathways, with the same effect on RuBisCO, evolved a number of times independently – indeed, C4 alone arose 62 times in 18 different plant families. A number of 'pre-adaptations' seem to have paved the way for C4, leading to its clustering in certain clades: it has most frequently been innovated in plants that already had features such as extensive vascular bundle sheath tissue.[22] Many potential evolutionary pathways resulting in the C4 phenotype are possible and have been characterised using Bayesian inference,[16] confirming that non-photosynthetic adaptations often provide evolutionary stepping stones for the further evolution of C4.

CAM is named after the family Crassulaceae, to which the jade plant belongs. Another example of a CAM plant is the pineapple.

The C4 construction is most famously used by a subset of grasses, while CAM is employed by many succulents and cacti. The trait appears to have emerged during the Oligocene, around 25 to 32 million years ago;[23] however, they did not become ecologically significant until the Miocene, 6 to 7 million years ago.[24] Remarkably, some charcoalified fossils preserve tissue organised into the Kranz anatomy, with intact bundle sheath cells,[25] allowing the presence C4 metabolism to be identified without doubt at this time. Isotopic markers are used to deduce their distribution and significance.

C3 plants preferentially use the lighter of two isotopes of carbon in the atmosphere, 12C, which is more readily involved in the chemical pathways involved in its fixation. Because C4 metabolism involves a further chemical step, this effect is accentuated. Plant material can be analysed to deduce the ratio of the heavier 13C to 12C. This ratio is denoted δ13C. C3 plants are on average around 14‰ (parts per thousand) lighter than the atmospheric ratio, while C4 plants are about 28‰ lighter. The δ13C of CAM plants depends on the percentage of carbon fixed at night relative to what is fixed in the day, being closer to C3 plants if they fix most carbon in the day and closer to C4 plants if they fix all their carbon at night.[26]

It is troublesome procuring original fossil material in sufficient quantity to analyse the grass itself, but fortunately there is a good proxy: horses. Horses were globally widespread in the period of interest, and browsed almost exclusively on grasses. There's an old phrase in isotope palæontology, "you are what you eat (plus a little bit)" – this refers to the fact that organisms reflect the isotopic composition of whatever they eat, plus a small adjustment factor. There is a good record of horse teeth throughout the globe, and their δ13C has been measured. The record shows a sharp negative inflection around 6 to 7 million years ago, during the Messinian, and this is interpreted as the rise of C4 plants on a global scale.[24]

When is C4 an advantage?

While C4 enhances the efficiency of RuBisCO, the concentration of carbon is highly energy intensive. This means that C4 plants only have an advantage over C3 organisms in certain conditions: namely, high temperatures and low rainfall. C4 plants also need high levels of sunlight to thrive.[27] Models suggest that, without wildfires removing shade-casting trees and shrubs, there would be no space for C4 plants.[28] But, wildfires have occurred for 400 million years – why did C4 take so long to arise, and then appear independently so many times? The Carboniferous period (~300 million years ago) had notoriously high oxygen levels – almost enough to allow spontaneous combustion[29] – and very low CO2, but there is no C4 isotopic signature to be found. And there doesn't seem to be a sudden trigger for the Miocene rise.

During the Miocene, the atmosphere and climate were relatively stable. If anything, CO2 increased gradually from 14 to 9 million years ago before settling down to concentrations similar to the Holocene.[30] This suggests that it did not have a key role in invoking C4 evolution.[23] Grasses themselves (the group which would give rise to the most occurrences of C4) had probably been around for 60 million years or more, so had had plenty of time to evolve C4,[31][32] which, in any case, is present in a diverse range of groups and thus evolved independently. There is a strong signal of climate change in South Asia;[23] increasing aridity – hence increasing fire frequency and intensity – may have led to an increase in the importance of grasslands.[33] However, this is difficult to reconcile with the North American record.[23] It is possible that the signal is entirely biological, forced by the fire- (and elephant?)-[34] driven acceleration of grass evolution – which, both by increasing weathering and incorporating more carbon into sediments, reduced atmospheric CO2 levels.[34] Finally, there is evidence that the onset of C4 from 9 to 7 million years ago is a biased signal, which only holds true for North America, from where most samples originate; emerging evidence suggests that grasslands evolved to a dominant state at least 15Ma earlier in South America.