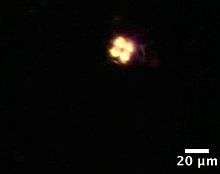 All species of animals, land plants and most fungi are multicellular, as are many algae, whereas a few organisms are partially uni- and partially multicellular, like slime molds and social amoebae such as the genus Dictyostelium.

Multicellular organisms arise in various different ways, for example by cell division or by aggregation of many single cells.[2] Colonial organisms are the result of many identical individuals joining together to form a colony. However, it can often be hard to separate colonial protists from true multicellular organisms, because the two concepts are not distinct; colonial protists have been dubbed "pluricellular" rather than "multicellular".[3][4]

Multicellularity has evolved independently at least 46 times,[5][6] including in some prokaryotes, like cyanobacteria, myxobacteria, actinomycetes, Magnetoglobus multicellularis or Methanosarcina. However, complex multicellular organisms evolved only in six eukaryotic groups: animals, fungi, brown algae, red algae, green algae, and land plants.[7] It evolved repeatedly for Chloroplastida (green algae and land plants), once or twice for animals, once for brown algae, three times in the fungi (chytrids, ascomycetes and basidiomycetes)[8] and perhaps several times for slime molds and red algae.[9] The first evidence of multicellularity is from cyanobacteria-like organisms that lived 3–3.5 billion years ago.[5] To reproduce, true multicellular organisms must solve the problem of regenerating a whole organism from germ cells (i.e. sperm and egg cells), an issue that is studied in evolutionary developmental biology. Animals have evolved a considerable diversity of cell types in a multicellular body (100–150 different cell types), compared with 10–20 in plants and fungi.[10]

Multicellular organisms, especially long-living animals, face the challenge of cancer, which occurs when cells fail to regulate their growth within the normal program of development. Changes in tissue morphology can be observed during this process. Cancer in animals (metazoans) has often been described as a loss of multicellularity.[18] There is a discussion about the possibility of existence of cancer in other multicellular organisms[19][20] or even in protozoa.[21] For example, plant galls have been characterized as tumors[22] but some authors argue that plants do not develop cancer.[23]

Separation of somatic and germ cells

In some multicellular groups, which are called Weismannists, a separation between a sterile somatic cell line and a germ cell line evolved. However, Weismannist development is relatively rare (e.g. vertebrates, arthropods, Volvox), as great part of species have the capacity for somatic embryogenesis (e.g. land plants, most algae, many invertebrates).[24][25]

One hypothesis for the origin of multicellularity is that a group of function-specific cells aggregated into a slug-like mass called a grex, which moved as a multicellular unit. This is essentially what slime molds do. Another hypothesis is that a primitive cell underwent nucleus division, thereby becoming a syncytium. A membrane would then form around each nucleus (and the cellular space and organelles occupied in the space), thereby resulting in a group of connected cells in one organism (this mechanism is observable in Drosophila). A third hypothesis is that as a unicellular organism divided, the daughter cells failed to separate, resulting in a conglomeration of identical cells in one organism, which could later develop specialized tissues. This is what plant and animal embryos do as well as colonial choanoflagellates.[26][27]

Because the first multicellular organisms were simple, soft organisms lacking bone, shell or other hard body parts, they are not well preserved in the fossil record.[28] One exception may be the demosponge, which may have left a chemical signature in ancient rocks. The earliest fossils of multicellular organisms include the contested Grypania spiralis and the fossils of the black shales of the Palaeoproterozoic Francevillian Group Fossil B Formation in Gabon (Gabonionta).[29] The Doushantuo Formation has yielded 600 million year old microfossils with evidence of multicellular traits.[30]

Until recently, phylogenetic reconstruction has been through anatomical (particularly embryological) similarities. This is inexact, as living multicellular organisms such as animals and plants are more than 500 million years removed from their single-cell ancestors. Such a passage of time allows both divergent and convergent evolution time to mimic similarities and accumulate differences between groups of modern and extinct ancestral species. Modern phylogenetics uses sophisticated techniques such as alloenzymes, satellite DNA and other molecular markers to describe traits that are shared between distantly related lineages.

The evolution of multicellularity could have occurred in a number of different ways, some of which are described below:

This theory suggests that the first multicellular organisms occurred from symbiosis (cooperation) of different species of single-cell organisms, each with different roles. Over time these organisms would become so dependent on each other they would not be able to survive independently, eventually leading to the incorporation of their genomes into one multicellular organism.[31] Each respective organism would become a separate lineage of differentiated cells within the newly created species.

This kind of severely co-dependent symbiosis can be seen frequently, such as in the relationship between clown fish and Riterri sea anemones. In these cases, it is extremely doubtful whether either species would survive very long if the other became extinct. However, the problem with this theory is that it is still not known how each organism's DNA could be incorporated into one single genome to constitute them as a single species. Although such symbiosis is theorized to have occurred (e.g. mitochondria and chloroplasts in animal and plant cells—endosymbiosis), it has happened only extremely rarely and, even then, the genomes of the endosymbionts have retained an element of distinction, separately replicating their DNA during mitosis of the host species. For instance, the two or three symbiotic organisms forming the composite lichen, although dependent on each other for survival, have to separately reproduce and then re-form to create one individual organism once more.

This theory states that a single unicellular organism, with multiple nuclei, could have developed internal membrane partitions around each of its nuclei.[32] Many protists such as the ciliates or slime molds can have several nuclei, lending support to this hypothesis. However, the simple presence of multiple nuclei is not enough to support the theory. Multiple nuclei of ciliates are dissimilar and have clear differentiated functions. The macronucleus serves the organism's needs, whereas the micronucleus is used for sexual reproduction with exchange of genetic material. Slime molds syncitia form from individual amoeboid cells, like syncitial tissues of some multicellular organisms, not the other way round. To be deemed valid, this theory needs a demonstrable example and mechanism of generation of a multicellular organism from a pre-existing syncytium.

The Colonial Theory of Haeckel, 1874, proposes that the symbiosis of many organisms of the same species (unlike the symbiotic theory, which suggests the symbiosis of different species) led to a multicellular organism. At least some, it is presumed land-evolved, multicellularity occurs by cells separating and then rejoining (e.g. cellular slime molds) whereas for the majority of multicellular types (those that evolved within aquatic environments), multicellularity occurs as a consequence of cells failing to separate following division.[33] The mechanism of this latter colony formation can be as simple as incomplete cytokinesis, though multicellularity is also typically considered to involve cellular differentiation.[34]

The advantage of the Colonial Theory hypothesis is that it has been seen to occur independently in 16 different protoctistan phyla. For instance, during food shortages the amoeba Dictyostelium groups together in a colony that moves as one to a new location. Some of these amoeba then slightly differentiate from each other. Other examples of colonial organisation in protista are Volvocaceae, such as Eudorina and Volvox, the latter of which consists of up to 500–50,000 cells (depending on the species), only a fraction of which reproduce.[35] For example, in one species 25–35 cells reproduce, 8 asexually and around 15–25 sexually. However, it can often be hard to separate colonial protists from true multicellular organisms, as the two concepts are not distinct; colonial protists have been dubbed "pluricellular" rather than "multicellular".[3]

About 800 million years ago,[37] a minor genetic change in a single molecule called guanylate kinase protein-interaction domain (GK-PID) may have allowed organisms to go from a single cell organism to one of many cells.[38]

The role of viruses

Genes borrowed from viruses have recently been identified as playing a crucial role in the differentiation of multicellular tissues and organs and even in sexual reproduction, in the fusion of egg cell and sperm. Such fused cells are also involved in metazoan membranes such as those that prevent chemicals crossing the placenta and the brain body separation. Two viral components have been identified. The first is syncytin, which came from a virus. The second identified in 2007 is called EFF1, which helps form the skin of Caenorhabditis elegans, part of a whole family of FF proteins. Felix Rey, of the Pasteur Institute in Paris has constructed the 3D structure of the EFF1 protein[39] and shown it does the work of linking one cell to another, in viral infections. The fact that all known cell fusion molecules are viral in origin suggests that they have been vitally important to the inter-cellular communication systems that enabled multicellularity. Without the ability of cellular fusion, colonies could have formed, but anything even as complex as a sponge would not have been possible. [40]

Multicellularity allows an organism to exceed the size limits normally imposed by diffusion: single cells with increased size have a decreased surface-to-volume ratio and have difficulty in absorbing sufficient nutrients and transporting them throughout the cell. Multicellular organisms thus have the competitive advantages of an increase in size without its limitations. It also permits increasing complexity by allowing the differentiation of numerous cellular lineages within an organism. Being multicellular also benefits with having a longer life span, thus still living even when a single-cell dies.