O2 build-up in the Earth's atmosphere. Red and green lines represent the range of the estimates while time is measured in billions of years ago (Ga). Stage 1 (3.85–2.45 Ga): Practically no O2 in the atmosphere. The oceans were also largely anoxic with the possible exception of O2 gases in the shallow oceans. Stage 2 (2.45–1.85 Ga): O2 produced, and rose to values of 0.02 and 0.04 atm, but absorbed in oceans and seabed rock. Stage 3 (1.85–0.85 Ga): O2 starts to gas out of the oceans, but is absorbed by land surfaces. There was no significant change in terms of oxygen level. Stages 4 and 5 (0.85–present): O2 sinks filled and the gas accumulates.[1]

The Great Oxygenation Event (GOE, also called the Oxygen Catastrophe, Oxygen Crisis, Oxygen Holocaust, Oxygen Revolution, or Great Oxidation) was the biologically induced appearance of dioxygen (O2) in Earth's atmosphere.[2] Although geological, isotopic, and chemical evidence suggest that this major environmental change happened around 2.3 billion years ago (2.3 Ga),[3] the actual causes and the exact date of the event are not clear.[4] The current geochemical and biomarker evidence for the development of oxygenic photosynthesis before the Great Oxidation Event has been mostly inconclusive.[5]

Oceanic cyanobacteria, evolved into multicellular forms more than 2.3 billion years ago (approximately 200 million years before the GOE),[6] are believed to have become the first microbes to produce oxygen by photosynthesis.[7] Before the GOE, any free oxygen they produced was chemically captured by dissolved iron or organic matter. The GOE was the point in time when these oxygen sinks became saturated, at which point oxygen, produced by the cyanobacteria, was free to escape into the atmosphere.

Cyanobacteria: Responsible for the buildup of oxygen in the earth's atmosphere

The increased production of oxygen set Earth's original atmosphere off balance.[8] Free oxygen is toxic to obligate anaerobic organisms, and the rising concentrations may have destroyed most such organisms at the time. Cyanobacteria were therefore responsible for one of the most significant extinction events in Earth's history. Besides marine cyanobacteria, there is also evidence of cyanobacteria on land.

A spike in chromium contained in ancient rock deposits formed underwater shows they had accumulated chromium washed off from continental shelves. Chromium is not easily dissolved and its release from rocks would have required the presence of a powerful acid. One such acid, sulfuric acid, might have been created through bacterial reactions with pyrite.[9] Mats of oxygen-producing cyanobacteria can produce a thin layer, one or two millimeters thick, of oxygenated water in an otherwise anoxic environment even under thick ice, and before oxygen started accumulating in the atmosphere, these organisms would already be adapted to oxygen.[10] Additionally, the free oxygen would have reacted with atmospheric methane, a greenhouse gas, greatly reducing its concentration and triggering the Huronian glaciation, possibly the longest episode of glaciation in Earth's history and called snowball Earth.[11]

Eventually, aerobic organisms evolved, that consumed oxygen and established an equilibrium in its availability. Free oxygen has been an important constituent of the atmosphere ever since.[11]

The most widely accepted chronology of the Great Oxygenation Event suggests that free oxygen was first produced by prokaryotic and then later eukaryotic organisms that carried out oxygenic photosynthesis more efficiently. The excess of oxygen those organisms produce is a waste product. These organisms lived long before the GOE,[12] perhaps as early as 3,500 million years ago.

Initially, the oxygen they produced would have quickly been removed from the atmosphere by the chemical weathering of reducing minerals (those able to be oxidized), most notably iron. This 'mass rusting' led to the deposition of iron(III) oxide in the form of banded-iron formations such as the sediments in Minnesota and Pilbara, Western Australia.

Oxygen only began to persist in the atmosphere in small quantities shortly (~50 million years) before the start of the GOE.[13] Without a mineral sink in the form of iron, oxygen could have accumulated very rapidly.

For example, at today's rates of photosynthesis (which are much greater than those in the land-plant-free Precambrian), modern atmospheric O2 levels could be produced in around 2,000 years.[14]

Another hypothesis is that oxygen producers did not evolve until just before the major rise in atmospheric oxygen concentration.[15] This is based on interpretation of the supposed oxygen indicator, mass-independent fractionation of sulfur isotopes, used in previous studies. This hypothesis would eliminate the need to explain a lag in time between the evolution of oxyphotosynthetic microbes and the rise in free oxygen.

Either way, the oxygen did eventually accumulate in the atmosphere, with two major consequences: First, it oxidized atmospheric methane (a strong greenhouse gas) to carbon dioxide (a weaker one) and water, triggering the Huronian glaciation, 2.4 to 2.1 billion years ago. The latter may have been a full-blown, and possibly the longest ever, snowball Earth episode, lasting 300–400 million years.[15][16] Second, the increased oxygen concentrations provided a new opportunity for biological diversification, as well as tremendous changes in the nature of chemical interactions between rocks, sand, clay, and other geological substrates and the Earth's air, oceans, and other surface waters.

Despite the natural recycling of organic matter, life had remained energetically limited until the widespread availability of oxygen. This breakthrough in metabolic evolution greatly increased the free energy supply to living organisms, having a truly global environmental impact; mitochondria evolved after the GOE. With more energy available from oxygen, organisms had the means for new, more complex morphologies. These new morphologies in turn helped drive evolution through interaction between organisms.[17]

Timeline of glaciations, shown in blue.

The gap between the start of oxygen production from photosynthetic organisms and the geologically rapid increase in atmospheric oxygen (about 2.5–2.4 billion years ago) may have been as long as 900 million years. Several hypotheses might explain the time lag: 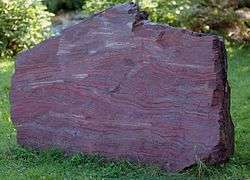 The oxygen increase had to await tectonically driven changes in the Earth, including the appearance of shelf seas, where reduced organic carbon could reach the sediments and be buried.[18] The newly produced oxygen was first consumed in various chemical reactions in the oceans, primarily with iron. Evidence is found in older rocks that contain massive banded iron formations that were apparently laid down as this iron and oxygen first combined; most of the planet's commercial iron ore is in these deposits. Researchers found that the amount of oxygen in the air spiked each time smaller land masses collided to form a super-continent. These massive pile ups generated mountain chains and as these mountains eroded, they released nutrients into the ocean, feeding the cyanobacteria that carry out photosynthesis.[19]

The early chemosynthetic organisms would have been a source of methane, which is an important trap for molecular oxygen, because oxygen readily oxidizes methane to carbon dioxide (CO2) and water in the presence of UV radiation. Modern methanogens require nickel as an enzyme cofactor. As the Earth's crust cooled, the supply of nickel from volcanoes was reduced and hence less methane was produced. This allowed the oxygen percentage of the atmosphere to rise as the decrease in production of methane allowed the oxygen producing algae and other such life forms to, in a sense, out-produce the methane producers.[20] From 2.7 to 2.4 billion years ago, the rate of deposition of nickel declined steadily; it was originally 400 times today's levels.[21]

A theory, called bistability, is a mathematical model of the atmosphere. In this model, UV shielding decreases the rate of methane oxidation once oxygen levels are sufficient to support the formation of an ozone layer. This explanation proposes an atmospheric system with two steady states, one with lower (0.02%) atmospheric oxygen content, and the other with higher (21% or more) oxygen content. The Great Oxygenation Event can then be understood as a switch between the lower to the upper stable steady states.[22]

Some bacteria living in the early oceans had the ability to separate water into hydrogen and oxygen molecules. By using the energy of the Sun, the separate hydrogen molecules were able to create organic compounds, and oxygen was a by-product. If the hydrogen-heavy compounds were buried, it would have allowed oxygen to accumulate in the atmosphere.

However, in 2001 scientists realized that the hydrogen would instead escape into space through a process called methane photolysis, in which hydrogen-containing methane reacts with oxygen releasing hydrogen. This hypothesis could explain why the early Earth stayed warm enough to sustain oxygen producing lifeforms.[23]

There is a possibility that the oxygen indicator was misinterpreted. During the proposed time of the lag in the previous theory, there was a change from mass-independently fractionated (MIF) sulfur to mass-dependently fractionated (MDF) sulfur in sediments. This was assumed to be a result of the appearance of oxygen in the atmosphere (since oxygen would have prevented the photolysis of sulfur dioxide, which causes MIF). This change from MIF to MDF of sulfur isotopes also may have been caused by an increase in glacial weathering, or the homogenization of the marine sulfur pool as a result of an increased thermal gradient during the Huronian glaciation period.[15]