Common descent describes how, in evolutionary biology, a group of organisms share a most recent common ancestor. There is evidence of common descent that all life on Earth is descended from the last universal common ancestor (LUCA).[1][2] In July 2016, scientists reported identifying a set of 355 genes from the LUCA of all organisms living on Earth.[3]

Common ancestry between organisms of different species arises during speciation, in which new species are established from a single ancestral population. Organisms which share a more recent common ancestor are more closely related. The most recent common ancestor of all currently living organisms is the last universal ancestor,[1] which lived about 3.9 billion years ago.[4][5] The two earliest evidences for life on Earth are graphite found to be biogenic in 3.7 billion-year-old metasedimentary rocks discovered in western Greenland[6] and microbial mat fossils found in 3.48 billion-year-old sandstone discovered in Western Australia.[7][8] All currently living organisms on Earth share a common genetic heritage (universal common descent), with each being the descendant from a single original species, though the suggestion of substantial horizontal gene transfer during early evolution has led to questions about monophyly of life.[1]

Universal common descent through an evolutionary process was first proposed by the English naturalist Charles Darwin in On the Origin of Species (1859), which concluded: "There is grandeur in this view of life, with its several powers, having been originally breathed into a few forms or into one; and that, whilst this planet has gone cycling on according to the fixed law of gravity, from so simple a beginning endless forms most beautiful and most wonderful have been, and are being, evolved."[9]

In the 1740s, French mathematician Pierre Louis Maupertuis made the first known suggestion in a series of essays that all organisms may have had a common ancestor, and that they had diverged through random variation and natural selection.[10][11] In Essai de cosmologie (1750), Maupertuis noted:

May we not say that, in the fortuitous combination of the productions of Nature, since only those creatures could survive in whose organizations a certain degree of adaptation was present, there is nothing extraordinary in the fact that such adaptation is actually found in all these species which now exist? Chance, one might say, turned out a vast number of individuals; a small proportion of these were organized in such a manner that the animals' organs could satisfy their needs. A much greater number showed neither adaptation nor order; these last have all perished.... Thus the species which we see today are but a small part of all those that a blind destiny has produced.[12]

In 1790, Immanuel Kant wrote in Kritik der Urteilskraft (Critique of Judgement) that the analogy of animal forms implies a common original type, and thus a common parent.[13]

[W]ould it be too bold to imagine, that in the great length of time, since the earth began to exist, perhaps millions of ages before the commencement of the history of mankind, would it be too bold to imagine, that all warm-blooded animals have arisen from one living filament, which the great First Cause endued with animality, with the power of acquiring new parts attended with new propensities, directed by irritations, sensations, volitions, and associations; and thus possessing the faculty of continuing to improve by its own inherent activity, and of delivering down those improvements by generation to its posterity, world without end?[14]

Charles Darwin's views about common descent, as expressed in On the Origin of Species, were that it was possible that there was only one progenitor for all life forms:

Therefore I should infer from analogy that probably all the organic beings which have ever lived on this earth have descended from some one primordial form, into which life was first breathed.[15]

All known forms of life are based on the same fundamental biochemical organization: genetic information encoded in DNA, transcribed into RNA, through the effect of protein- and RNA-enzymes, then translated into proteins by (highly similar) ribosomes, with ATP, NADPH and others as energy sources, etc. Furthermore, the genetic code (the "translation table" according to which DNA information is translated into proteins) is nearly identical for all known lifeforms, from bacteria and archaea to animals and plants. The universality of this code is generally regarded by biologists as definitive evidence in favor of the theory of universal common descent. Analysis of the small differences in the genetic code has also provided support for universal common descent. An example would be Cytochrome c which most organisms actually share.[16] A statistical comparison of various alternative hypotheses has shown that universal common ancestry is significantly more probable than models involving multiple origins.[1][17]

Similarities which have no adaptive relevance cannot be explained by convergent evolution, and therefore they provide compelling support for the theory of universal common descent.

The universality of many aspects of cellular life is often pointed to as supportive evidence to the more compelling evidence listed above. These similarities include the energy carrier adenosine triphosphate (ATP), and the fact that all amino acids found in proteins are left-handed. It is, however, possible that these similarities resulted because of the laws of physics and chemistry, rather than universal common descent and therefore resulted in convergent evolution. 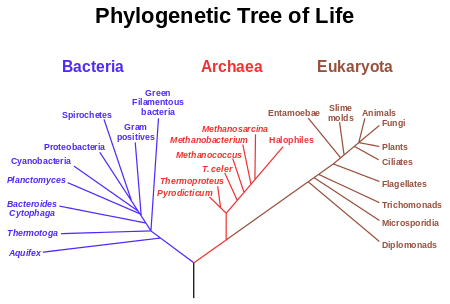 Another important piece of evidence is that it is possible to construct detailed phylogenetic trees (i.e., "genealogic trees" of species) mapping out the proposed divisions and common ancestors of all living species. In 2010, Douglas L. Theobald published a statistical analysis of available genetic data,[1] mapping them to phylogenetic trees, that gave "strong quantitative support, by a formal test, for the unity of life."[2] It should be noted, however, that the "formal test" was criticised[18] for not including consideration of convergent evolution, and Theobald has defended the method against this claim.[19][20]

Traditionally, these trees have been built using morphological methods, such as appearance, embryology, etc. Recently, it has been possible to construct these trees using molecular data, based on similarities and differences between genetic and protein sequences. All these methods produce essentially similar results, even though most genetic variation has no influence over external morphology. That phylogenetic trees based on different types of information agree with each other is strong evidence of a real underlying common descent.[21]

For more details on this topic, see Evidence of common descent. 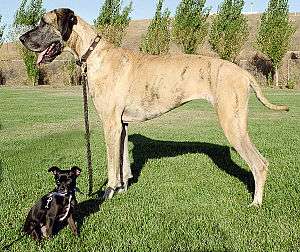 The Chihuahua mix and Great Dane both share a common ancestor, the wolf, but show the power of artificial selection to create diversity of form in a relatively short period of time.
Main article: Dog breeding

The diversity of domesticated dogs is an example of the power of artificial selection. All breeds share common ancestry, having descended from wolves. Humans selectively bred them to enhance specific characteristics, such as color and length or body size. This created a range of breeds that include the Chihuahua, Great Dane, Basset Hound, Pug, and Poodle. Wild wolves, which did not undergo artificial selection, are relatively uniform in comparison. 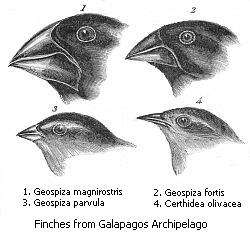 During his studies on the Galápagos Islands, Charles Darwin observed 13 species of finches that are closely related and differ most markedly in the shape of their beaks. The beak of each species is suited to the food available in its particular environment, suggesting that beak shapes evolved by natural selection. Large beaks were found on the islands where the primary source of food for the finches are nuts and therefore the large beaks allowed the birds to be better equipped for opening the nuts and staying well nourished. Slender beaks were found on the finches which found insects to be the best source of food on the island they inhabited; their slender beaks allowed the birds to be better equipped for pulling out the insects from their tiny hiding places. The finch is also found on the main land and it is thought that they migrated to the islands and began adapting to their environment through natural selection.