This article is about a Russian newspaper. For a Latvian newspaper of the same name, see Novaya Gazeta (Latvia).

Novaya Gazeta (Russian: Новая газета, translated as New Gazette) is a Russian newspaper well known in its country for its critical and investigative coverage of Russian political and social affairs.[2] Six Novaya Gazeta journalists, including Yury Shchekochikhin, Anna Politkovskaya and Anastasia Baburova, have been murdered since 2001, in connection with their investigations.[3] 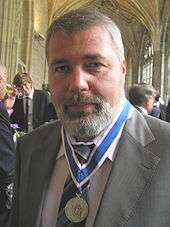 Editor in chief Dmitry Muratov shortly after having received the Four Freedoms Award on behalf of Novaya Gazeta.

It is published in Moscow, in regions within Russia, and in some foreign countries. As of 2009, the print edition is published on Mondays, Wednesdays and Fridays; English articles on the website are published more erratically. Paper's staff controls 51% of shares, the remaining 49% belong to Mikhail Gorbachev and Alexander Lebedev. Since 2013, Lebedev is also the head of the "investigative department" of the newspaper.[4]

In 1990, Mikhail Gorbachev used the money he earned with his Nobel Peace Prize to help set up the Novaya Gazeta in 1993 and purchase its first computers.[5]

On 26 November 2001, Novaya Gazeta published an article by Oleg Lurie stating that the management of the International Industrial Bank headed by Sergey Pugachyov had been involved in money laundering in the Bank of New York.[6] Pugachyov's bank brought a libel suit against the newspaper, citing financial losses, as a number of its customers had allegedly changed the terms of their accounts in a way which made the bank lose money because of the publication. On 28 February 2002, the bank won the case in Moscow's Basmanny municipal court and was awarded 15 million rubles (about $500,000) in lost revenue, an unprecedented sum for Russian newspapers that might undermine the very existence of Novaya Gazeta, especially as on 22 February Novaya Gazeta had been ordered by the same Basmanny court to pay about $1 million for a corruption allegation against the Krasnodar Krai's top judge.

In April, the decision on the International Industrial Bank case was reconfirmed by a court. However, in an article of 27 May 2002,[7] Yulia Latynina, a Novaya Gazeta journalist, revealed that the bank's three customers named in the lawsuit were its subsidiaries or otherwise controlled by its board of directors, and claimed that Novaya Gazeta had requested to open a criminal fraud investigation into the activities of the bank. As a result, in June 2002 the International Industrial Bank renounced its claim to the compensation.[8][9]

Yury Shchekochikhin, a renowned journalist and deputy in the State Duma, had also worked for the newspaper as an investigative journalist and had been a deputy Editor-in-Chief of it until he died after a mysterious and severe allergy on 3 July 2003. Some of his contributions published in Novaya Gazeta were related to the investigation of the Three Whales Corruption Scandal.

In 2004, the newspaper printed seven articles by columnist Georgy Rozhnov, which accused Sergey Kiriyenko of embezzling US$4.8 billion of International Monetary Fund funds in 1998 when he was Prime Minister of Russia.[10] The newspaper based the accusations on a letter allegedly written to Colin Powell and signed by U.S. Congressmen Philip Crane, Mike Pence, Charlie Norwood, Dan Burton and Henry Bonilla and posted on the website of the American Defense Council.[11] The newspaper went on to claim that Kiriyenko had used some of the embezzled funds to purchase real estate in the United States. It was later revealed that the letter was a prank concocted by The eXile.[11][12] In response, Kiriyenko sued Novaya Gazeta and Rozhnov for libel,[12] and in passing judgement in favour of Kiriyenko the court ordered Novaya Gazeta to retract all publications relating to the accusations and went on to say that the newspaper "is obliged to publish only officially proven information linking Mr Kiriyenko with embezzlement."[10]

Journalist Anna Politkovskaya, who was critical of Russia's actions in Chechnya, wrote for Novaya Gazeta until her assassination on 7 October 2006. Politkovskaya wrote in an essay that the editors received: "Visitors every day in our editorial office who have nowhere else to bring their troubles, because the Kremlin finds their stories off-message, so that the only place they can be aired is in our newspaper, Novaya Gazeta."[13]

Journalist and human rights lawyer Stanislav Markelov was shot and killed in Moscow on 19 January 2009 while leaving a press conference about his last minute appeal against the early release of Yuri Budanov, a former Russian military officer convicted for kidnapping and aggravated murder of a young Chechen woman.[14][15] Anastasia Baburova, a freelance journalist for Novaya Gazeta and a member of Autonomous Action, was with Markevlov at the time and was also killed. Racist groups praised Markelov's killing on the Internet, but it is unclear whether they were behind it.

On 13 April 2009, the newspaper was granted the first-ever print interview in a Russian publication with President Dmitri Medvedev, discussing issues such as civil society and the social contract, transparency of public officials and Internet development.[16]

On 26 January 2010, the paper's web site was subjected to a denial of service attack and effectively taken offline.[17] As of 1 February 2010, the site was still inaccessible. At the peak of the attack the server was receiving 1.5 million connections per second.[18] The newspaper maintained its online presence by publishing articles on its LiveJournal page.[19] On 7 April 2011, the web site was targeted again with the same botnet that appears to be used in a large scale attack on LiveJournal that hosts many opposition blogs.[20][21][22][23]

25 July 2014 the paper opened with "Vergeef ons, Nederland" / "Прости, Голландия" ("Forgive us, Netherlands" in both Dutch and Russian), in response to the Malaysia Airlines Flight 17 disaster.[24]

Svobodnoe Prostranstvo ("Free Space", Russian: Свободное Пространство), which had been a colour supplement to Novaya Gazeta, is included in the Friday issue.[25][26]

Novaya Gazeta regularly contain free inserts of its side-projects or other newly launched newspapers. The United Civil Front (by the corresponding organisation) and Yabloko's newspaper were published in the form of inserts in the past. Current inserts include the Shofyor ("Driver" or "chauffeur", Russian: Шофёр) side project and the popular science Kentavr ("Centaur", Russian: Кентавр).

The Russian version of Le Monde diplomatique was promoted by being issued as such inserts for one year. The number of subscribers after that amounted to 43 and continuation of issuing the insert would have been considered senseless.[27] Novaya Gazeta has also published The New York Times International Weekly on Fridays since 2009. This eight-page supplement features a selection of articles from The New York Times translated into Russian.