This article is about the German princely title. For persons named Fürst, see Fürst (surname).

Fürsten crown used in heraldry, borne above the coat of arms to indicate a principality ruled.[1] The Fürsten crown, sometimes placed together with a mantle, is not always found on a Fürstenhaus (princely house) coat of arms; these adornments were not part of formal armorial protocols, but simply heraldic grace.[1]

Fürst (German pronunciation: [ˈfʏʁst], female form Fürstin, plural Fürsten; from Old High German furisto, "the first", a translation of the Latin princeps) is a German word for a ruler and is also a princely title. Fürsten were, since the Middle Ages, members of the highest nobility who ruled over states of the Holy Roman Empire and later its former territories, below the ruling Kaiser (emperor) or König (king).[2] A Prince of the Holy Roman Empire was the reigning sovereign ruler, monarch, of an Imperial State that held imperial immediacy in the boundaries of the Holy Roman Empire.[2] The territory ruled is referred to in German as a Fürstentum (principality),[3] the family dynasty referred to as a Fürstenhaus (princely house), and the (non-reigning) descendants of a Fürst are titled and referred to in German as Prinz (prince) or Prinzessin (princess).[4]

The English language uses the term prince for both concepts. Latin-based languages (French, Italian, Romanian, Spanish, Portuguese) also employ a single term, whereas Dutch as well as the Scandinavian and Slavic languages (Russian, Polish, Serbian, etc.) use separate terms similar to those used in German (see knyaz for the latter).

Since the Middle Ages, the German designation and title Fürst refers to:

Use of the title in German 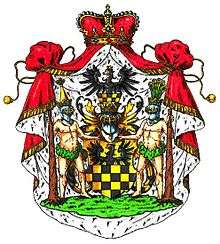 Fürst von Putbus, arms with a mantle and Fürsten crown. 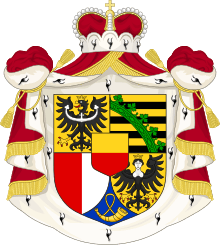 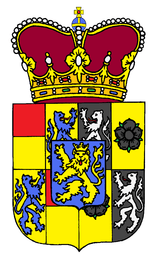 The title Fürst (female form Fürstin, female plural Fürstinnen) is used for the heads of princely houses of German origin (in German a Fürstenhaus). From the Late Middle Ages it referred to any vassal of the Holy Roman Emperor ruling over an immediate estate. Unless he also holds a higher title, such as grand duke or king, he will be known either by the formula "Fürst von + [geographic origin of the dynasty]", or by the formula "Fürst zu + [name of the ruled territory]". These forms can be combined, as in "...von und zu Liechtenstein".

The rank of the title-holder is not determined by the title itself, but by his degree of sovereignty, the rank of his suzerain, or the age of the princely family (note the terms Uradel, Briefadel, altfürstliche, neufürstliche; and see German nobility). The Fürst (Prince) ranked below the Herzog (Duke) in the Holy Roman Empire's hierarchy, but princes did not necessarily rank below dukes in non-German parts of Europe. Likewise, the style usually associated with the title of Fürst in post-medieval Europe, Durchlaucht (translated as "Serene Highness"), was considered inferior to Hoheit ("Highness") in Germany, though not in France.

Other uses in German

Fürst is used more generally in German to refer to any ruler, such as a king, a duke, or a Fürst in the broad sense (compare Niccolò Machiavelli's Il Principe). Before the 12th century, counts were also included in this group, in accordance with its usage in the Holy Roman Empire, and in some historical or ceremonial contexts, the term Fürst can extend to any lord.

The descendants of a Fürst, when that title has not been restricted by patent or custom to male primogeniture, is distinguished in title from the head of the family by use of the prefix Prinz ("prince", from Latin: princeps; female Prinzessin).

A nobleman whose family is non-dynastic, i.e., has never reigned or been mediatised, may also be made a Fürst by a sovereign, in which case the grantee and his heirs are deemed titular or nominal princes, enjoying only honorary princely title without commensurate rank. In families thus elevated to princely title (usually as reward for military or political services) in or after the 18th century, the cadets often hold only the title of count (Graf),such as Bismarck, Hardenberg, Eulenberg), but in a few cases the title of Fürst was shared equally by all male-line descendants of the original grantee (for example: the families of Wrede, Hohenberg and Urach).

Several titles were derived from the term Fürst:

The word Fürst designates the head (the "first") of a ruling house, or the head of a branch of such a house. The "first" originates from ancient Germanic times, when the "first" was the leader in battle.

Various cognates of the word Fürst exist in other European languages (see extensive list under Prince), sometimes only used for a princely ruler. A derivative of the Latin princeps (ironically, a Republican title in Roman law, which never formally recognized a monarchic style for the executive head of state but nominally maintained the Consuls as collegial Chief magistrates) is used for a genealogical prince in some languages (e.g., Dutch and Frisian, where a ruler is usually called vorst (Frisian: foarst), but a prince of the blood is always styled prins; and Icelandic where fursti is a ruler, and a prince of the blood royal is prins (in these languages no capital letters are used in writing titles, unless, of course, they occur as the first word of a sentence)), while in other languages only a princeps-derived word is used for both irrespectively (e.g., English uses prince for both). In any case the original (German or other) term may also be used.