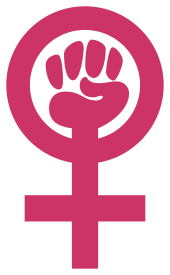 A generic symbol for feminism

Feminist political theory encompasses a broad scope of approaches. It overlaps with related areas including feminist jurisprudence/feminist legal theory; feminist political philosophy; female-centered empirical research in political science; and feminist research methods (feminist method) for use in political science the social sciences. Indeed, one scholar notes that, insofar as almost all versions of feminism involve "demonstrating the ways in which politics, understood as power relations, is present in our everyday lives," one could reasonably "describe feminist theory as a whole as a kind of political philosophy."[1] What frequently distinguishes feminist political theory from feminism broadly is the specific examination of the state and its role in the reproduction or redressing of gender inequality.[1] In addition to being broad and multidisciplinary, the field is relatively new, inherently innovative, and still expanding; the Stanford Encyclopedia of Philosophy explains that "feminist political philosophy serves as a field for developing new ideals, practices, and justifications for how political institutions and practices should be organized and reconstructed."[2]

For summary of feminist history more broadly, see feminism. Feminist political theory as a term only consolidated in the West during Women's Liberation movements of the 1960s and 70s. Previously, very few works of political theory explicitly considered women's political situation. John Stuart Mill’s 1861 call for women's suffrage in The Subjection of Women is a notable exception.[3] In the early 20th Century, Simone de Beauvoir’s 1949 work The Second Sex exposed the power dynamics surrounding womanhood and laid the foundation for subsequent feminist theories exposing women's social subjugation. In the 1980s and 1990s, feminist theory expanded into the legal realm led by Catharine MacKinnon’s and Andrea Dworkin’s campaigns against pornography.[4] Several distinct stages are sketched out below.

Liberal feminism marks an important approach to feminist politics which was especially pervasive during the first half of the Twentieth Century. Some of the most well known examples of liberal feminist writing were published far earlier, including John Stuart Mill's The Subjection of Women (1869) and Mary Wollstonecraft's A Vindication of the Rights of Woman (1792). A common theme of liberal feminism is an emphasis on equal opportunity via fair opportunity and equal political rights. In addition, according to the The International Encyclopedia of Ethics, "[L]iberal feminisms of both the past and the present retain some commitment to the distinction between the public and private realms – a distinction [which is the] focus of much critique within feminist political theory."[1]

Whereas Marxist feminism and socialist feminism considered classism as the primary source of women's oppression, radical feminism abdicated any previous forms of political theory to develop entirely new theories rooted primarily on the direct experiences of women. Radial Feminism, and its perceived impositions, created an anti feminist backlash starting around 2012. With certain women coming to the forefront to explain why the outdated ideas are no longer of use to them because of the already made advancements in the field of women rights.

A key aspect of feminist political theory/philosophy is feminist epistemology. Feminist epistemologists question the objectivity of social and philosophical sciences by contending that standards of authority and credibility are socially constructed and thus reflect and re-entrench the sociopolitical status quo.[5] Thus, one common feminist methodological solution is to include many diverse voices reflecting all parts of society in the process of knowledge-making.

Political theory on the gendering of institutions explores questions such what does it mean for an institution to be “gendered," how can one evaluate whether an institution is gendered, and what are the consequences of gendered institutions for the people who work within them (of all genders). An example of such related scholarship is Eileen McDonagh's book The Motherless State which explores how socially feminized "motherly" attributes have been stripped from modern governance models.[6]

Theorist studying this aspect of feminist political theory question the construction of women as an identity group. On a basic level, they consider whether it is even possible to come to some sort of conclusion about a "women" group’s relation to politics. One facet of the debate involves intersectionality and whether women from different racial and cultural backgrounds have enough in common to form a political group.[7] Another facet questions whether transgender women should be included in the group "women" insofar as they lack many of the experiences of girlhood and womanhood which bind "women" together as a distinct group.[8]

Yet another approach to this topic includes redefining "groupness;" for example, Iris Marion Young has suggested women are more of a "seriality" rather than a group insofar as they undergo similar experiences but in isolation of each other, lacking a sense of group identity.[9]