This article is about the philosopher. For the book, see Mencius (book). An image of Mencius in the sanctuary of the Mencius Temple, Zoucheng

He was an itinerant Chinese philosopher and sage, and one of the principal interpreters of Confucianism. Supposedly, he was a pupil of Confucius' grandson, Zisi. Like Confucius, according to legend, he travelled throughout China for forty years to offer advice to rulers for reform.[7] During the Warring States period (403–221 BC), Mencius served as an official and scholar at the Jixia Academy in the State of Qi (1046 BC to 221 BC) from 319 to 312 BC. He expressed his filial devotion when he took three years leave of absence from his official duties for Qi to mourn his mother's death. Disappointed at his failure to effect changes in his contemporary world, he retired from public life.

Mencius is buried in the "Mencius Cemetery" (孟子林, Mengzi Lin, also known as 亚圣林, Yasheng Lin), which is located 12 km to the northeast of Zoucheng's central urban area. A stele carried by a giant stone tortoise and crowned with dragons stands in front of his grave.[8]

This saying refers to the legend that Mencius's mother moved houses three times before finding a location that she felt was suitable for the child's upbringing. As an expression, the idiom refers to the importance of finding the proper environment for raising children.

Mencius's father died when he was very young. His mother Zhǎng (仉) raised her son alone. They were very poor. At first they lived by a cemetery, where the mother found her son imitating the paid mourners in funeral processions. Therefore, the mother decided to move. The next house was near a market in the town. There the boy began to imitate the cries of merchants (merchants were despised in early China). So the mother moved to a house next to a school. Inspired by the scholars and students, Mencius began to study. His mother decided to remain, and Mencius became a scholar.

Another story further illustrates the emphasis that Mencius's mother placed on her son's education. As the story goes, once when Mencius was young, he was truant from school. His mother responded to his apparent disregard for his education by taking up a pair of scissors and cutting the cloth she had been weaving in front of him. This was intended to illustrate that one cannot stop a task midway, and her example inspired Mencius to diligence in his studies.

There is another legend about his mother and his wife, involving a time when his wife was at home alone and was discovered by Mencius not to be sitting properly. Mencius thought his wife had violated a rite, and demanded a divorce. His mother claimed that it was written in The Book of Rites that before a person entered a room, he should announce his imminent presence loudly to let others prepare for his arrival; as he had not done that in this case, the person who had violated the rite was Mencius himself. Eventually Mencius admitted his fault.

She is one of 125 women of which biographies have been included in the Lienü zhuan, written by Liu Xiang.

Duke Huan of Lu's son through Qingfu (慶父) was the ancestor of Mencius. He was descended from Duke Yang of the State of Lu 魯煬公 Duke Yang was the son of Bo Qin, who was the son of the Duke of Zhou of the Zhou dynasty royal family. The genealogy is found in the Mencius family tree (孟子世家大宗世系).[9][10][11]

Meng Haoran and Meng Jiao were descendants of Mencius who lived during the Tang dynasty.

One of Mencius's direct descendants was Dr. Meng Chih (Anglicised as Dr. Paul Chih Meng) former director of China House, and director of the China Institute in 1944. Time magazine reported Dr. Meng's age that year as 44. Dr. Meng died in Arizona in 1990 at the age of 90.[24] North Carolina's Davidson College and Columbia University were his alma mater. He was attending a speech along with Confucius descendant H. H. Kung.[25]

The descendants of Mencius still use generation poems for their names given to them by the Ming and Qing Emperors along with the descendants of the other Four Sages 四氏. Confucius, Zengzi, and Yan Hui.[30][31]

Historical sites related to his descendants include the Meng family mansion 孟府, Temple of Mencius 孟廟, and Cemetery of Mencius 孟林. 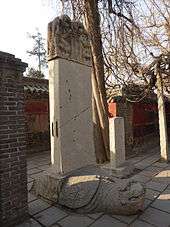 A Yuan Dynasty turtle with a stele honoring Mencius

Mencius's interpretation of Confucianism has generally been considered the orthodox version by subsequent Chinese philosophers, especially by the Neo-Confucians of the Song dynasty. Mencius's disciples included a large number of feudal lords, and he was actually more influential than Confucius had been.[32] The Mencius (also spelled Mengzi or Meng-tzu), a book of his conversations with kings of the time, is one of the Four Books that Zhu Xi grouped as the core of orthodox Neo-Confucian thought. In contrast to the sayings of Confucius, which are short and self-contained, the Mencius consists of long dialogues, including arguments, with extensive prose.

While Confucius himself did not explicitly focus on the subject of human nature, Mencius asserted the innate goodness of the individual, believing that it was society's influence – its lack of a positive cultivating influence – that caused bad moral character. "He who exerts his mind to the utmost knows his nature"[33] and "the way of learning is none other than finding the lost mind."[34]

His translator James Legge finds a close similarity between Mencius's views on human nature and those in Bishop Butler's Sermons on Human Nature.

The Four Beginnings (or Sprouts)

To show innate goodness, Mencius used the example of a child falling down a well. Witnesses of this event immediately feel

Human nature has an innate tendency towards goodness, but moral rightness cannot be instructed down to the last detail. This is why merely external controls always fail in improving society. True improvement results from educational cultivation in favorable environments. Likewise, bad environments tend to corrupt the human will. This, however, is not proof of innate evil because a clear thinking person would avoid causing harm to others. This position of Mencius puts him between Confucians such as Xunzi who thought people were innately bad, and Taoists who believed humans did not need cultivation, they just needed to accept their innate, natural, and effortless goodness. The four beginnings/sprouts could grow and develop, or they could fail. In this way Mencius synthesized integral parts of Taoism into Confucianism. Individual effort was needed to cultivate oneself, but one's natural tendencies were good to begin with. The object of education is the cultivation of benevolence, otherwise known as Ren.

According to Mencius, education must awaken the innate abilities of the human mind. He denounced memorization and advocated active interrogation of the text, saying, "One who believes all of a book would be better off without books" (尽信书，则不如无书, from 孟子.尽心下). One should check for internal consistency by comparing sections and debate the probability of factual accounts by comparing them with experience.

Mencius also believed in the power of Destiny in shaping the roles of human beings in society. What is destined cannot be contrived by the human intellect or foreseen. Destiny is shown when a path arises that is both unforeseen and constructive. Destiny should not be confused with Fate. Mencius denied that Heaven would protect a person regardless of his actions, saying, "One who understands Destiny will not stand beneath a tottering wall". The proper path is one which is natural and unforced. This path must also be maintained because, "Unused pathways are covered with weeds." One who follows Destiny will live a long and successful life. One who rebels against Destiny will die before his time.

Mencius emphasized the significance of the common citizens in the state. While Confucianism generally regards rulers highly, he argued that it is acceptable for the subjects to overthrow or even kill a ruler who ignores the people's needs and rules harshly. This is because a ruler who does not rule justly is no longer a true ruler. Speaking of the overthrow of the wicked King Zhou of Shang, Mencius said, "I have merely heard of killing a villain Zhou, but I have not heard of murdering [him as] the ruler."[36]

This saying should not be taken as an instigation to violence against authorities but as an application of Confucian philosophy to society. Confucianism requires a clarification of what may be reasonably expected in any given relationship. All relationships should be beneficial, but each has its own principle or inner logic. A Ruler must justify his position by acting benevolently before he can expect reciprocation from the people. In this view, a King is like a steward. Although Confucius admired Kings of great accomplishment, Mencius is clarifying the proper hierarchy of human society. Although a King has presumably higher status than a commoner, he is actually subordinate to the masses of people and the resources of society. Otherwise, there would be an implied disregard of the potential of human society heading into the future. One is significant only for what one gives, not for what one takes.

His alleged years make him contemporary with Xun Zi, Zhuangzi, Gaozi, and Plato.

Xun Zi was a Confucian who believed that human nature is centered on self-interest and greed, and the purpose of moral cultivation is to develop our nature into goodness. This put him at odds with Mencius. Later, the thinker Zhu Xi declared the views of Xun Zi to be unorthodox, instead supporting the position of Mencius.

Mencius's argument that unjust rulers may be overthrown is reminiscent of Socrates' argument in Book I of Plato's Republic.