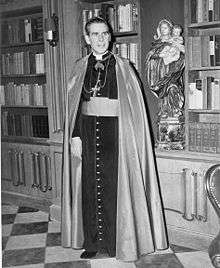 The ferraiolo (also ferraiuolo, ferraiolone) is a type of cape traditionally worn by clergy in the Roman Catholic Church on formal, non-liturgical occasions. It can be worn over the shoulders, or behind them, extends in length to the ankles, is tied in a bow by narrow strips of cloth at the front, and does not have any 'trim' or piping on it.

The colour of the ferraiolo is determined by the rank of the cleric, being black for secular priests, violet for supernumerary protonotaries apostolic and bishops and scarlet watered silk for cardinals.[1] A ferraiolo of watered silk also denotes the wearer is an apostolic nuncio or is attached to the Papal household. The Pope does not wear a ferraiolo. 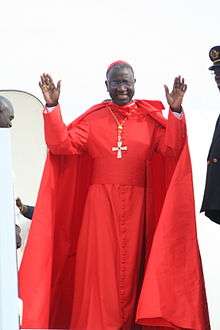 Cardinal Sarr of Dakar wearing his ferraiolo of watered silk

Even in modern times of the 21st century, the Order of Canons Regular of Premontre (Premonstratensians, Norbertines or white canons), the Camaldolese, the members of the Orders of Our Lady of Mercy and of the Holy Trinity, and the Olivetans, as well as a few other orders who wear a prelatical costume have the privilege of wearing the ferraiolo entirely of white cloth. The Premonstratensians also have the privilege of wearing this garment with a white four-cornered biretta of the same material. Some white canons even choose to wear white shoes when dressed in this formal attire. The additional items traditionally worn by the clergy, i.e. cincture or sash is also entirely white. The Canon Regular is allowed to wear a surplice for any liturgical circumstance and the rochet for non-liturgical events, but not worn with the ferraiolo. The Premonstratensian canon, as a simple priest, deacon or seminarian is permitted to wear the (filed or textured charmeuse) ferraiolo, band cincture/sash with braided fringe and biretta (without pom) entirely made of white cloth, unlike the secular priests who must wear a black wool ferraiolo. The Premonstratensian Abbots regiminis, as well as Abbots nullius, are permitted to wear the ferraiolo of watered silk and add to their monastic habit the pectoral cross and the ring. This same regular prelate or abbot, who also as a Canon Regular, may wear a biretta (with pom). In addition to wearing the other privileged items, the mantelletta, made of the same cloth of his monastic habit, may be worn by an abbot who is not in his own monastery of record, but worn without the ferraiolo.

The simplification of clerical dress for the Roman Church following the Second Vatican Council has been promulgated in three documents, which together comprise the current body of ecclesiastical law on this question. The first is the Instruction of the Secretariat of State of 31 March 1969 Ut sive sollicite (USS), on the dress, titles, and coats-of-arms of Cardinals, Bishops, and lesser Prelates. The second is the Circular Letter of the Sacred Congregation for the Clergy of 30 October 1970 Per Instructionem, on the reform of choir dress, which applies the prescriptions of USS to Canons, Beneficiaries, and Pastors, and by explicit extension to all other categories of ecclesiastics. Neither of these documents sets out synthetic schemata of the forms of dress of all secular and religious clergy of the Roman Rite, but rather they amend the pre-existing paradigms. A more systematic list of the forms of dress, relying on these two previous documents and augmenting them in part, is given in the first appendix of the new Caeremoniale Episcoporum (CE), on the dress of Prelates. However, even the last named document does not give every detail, as it presupposes the sartorial customs of the Roman Church and does not treat those ecclesiastics under the rank of Prelates and Canons. For the pre-conciliar paradigms and for the perduring sartorial customs of the Roman Rite concerning details about which these documents are silent, older works must be relied upon, the best of which is Nainfa's Costume of Prelates of the Catholic Church.[1] The Church's traditions and documents can only speak to the dignity of wearing such formal attire in the appropriate setting such as academic commencements, formal balls and dinners and other local and state gatherings that mandate formal attire be worn.

As with many other items of clerical clothing and vestments, the ferraiolo originated as an item of clothing for Roman citizens, originally being knee-length.