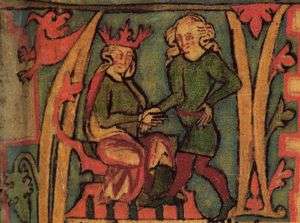 King Harald I of Norway receives Norway out of his father's hands in this illustration from the Flateyjarbók.

The Flatey Book, (Icelandic: Flateyjarbók; lit. "Flat-island book") is an important medieval Icelandic manuscript. It is also known as GkS 1005 fol. and by the Latin name Codex Flateyensis.

The Flatey Book is the largest medieval Icelandic manuscript, comprising 225 written and illustrated vellum leaves. It contains mostly sagas of the Norse kings as found in the Heimskringla, specifically the sagas about Olaf Tryggvason, St. Olaf, Sverre, Hakon the Old, Magnus the Good, and Harald Hardrada. But they appear here expanded with additional material[1] not found elsewhere (some of it being very old) along with other unique differences. Most—but not all—of the additional material is placed within the royal sagas, sometimes interlaced. Additionally, the manuscript contains the only copy of the eddic poem Hyndluljóð, a unique set of annals from creation to 1394, and many short tales not otherwise preserved such as Nornagests þáttr ("the Story of Norna Gest").

The Flatey Book contains a short story called Völsa þáttr, which offers an account of a pagan ritual in which two men lift the lady of the household over a door frame to help her look into the otherworld; this ritual is also recorded by a 10th-century Arab Muslim writer named Ahmad ibn Fadlan, who witnessed this ritual firsthand during a Norse funeral.[2]

From internal evidence the book was being written in 1387 and was completed in 1394 or very soon after. The first page states that its owner is "Jonn Hakonar son" and that the book was scribed by two priests. One of them, "Jon prestr Þórðar son", scribed the contents from the tale of Eirík the Traveller down to the end of the two Olaf sagas and the other, "Magnús prestr Thorhallz sun", scribed the earlier and later material and also drew the illustrations.

Further material was inserted towards the end of the 15th century.

The manuscript first received special attention by the learned in 1651 when Bishop Brynjólfur Sveinsson of Skálholt, with the permission of King Frederick III of Denmark, requested all folk of Iceland who owned old manuscripts to turn them over to the Danish king, providing either the original or a copy, either as a gift or for a price. Jon Finnsson, who resided on Flatey ('Flat Island') in the fjord Breiðafjörður on the northwest coast of Iceland, was then the owner of the book which was already known as the Flateyjarbók. At first Jon refused to release his precious heirloom, the biggest and best book in all of Iceland, and he continued to refuse even when Bishop Brynjólfur paid him a personal visit and offered him five hundreds of land. Jon only changed his mind and bestowed the book on the bishop just as the bishop was leaving the region.

The manuscript was given as a present from Bishop Brynjólfur to King Frederick III in 1656, and placed in the Royal Library of Copenhagen. (The rest of Bishop Brynólfur's collection was dispersed by his heirs, who had no interest in a collection of old manuscripts, and most disappeared for ever, though fortunately paper transcripts had been made from many of them.) The Flatey Book and the Codex Regius were repatriated to Iceland in 1971 as Icelandic national treasures and are preserved and studied by the Árni Magnússon Institute for Icelandic Studies.

Flateyjarbók consists of the following texts: