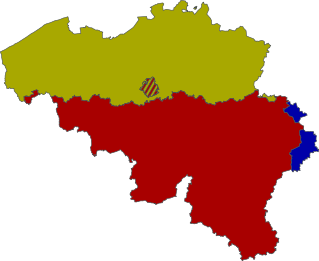 Official languages of Belgium: Dutch (yellow), French (red) and German (blue). Brussels is a bilingual area where both Dutch and French have an official status.

Flemish (Vlaams),[1][2] also called Flemish Dutch (Vlaams-Nederlands), Belgian Dutch (Belgisch-Nederlands [ˈbɛlɣis ˈneːdərlɑnts]), or Southern Dutch (Zuid-Nederlands), refers to any of the varieties of the Dutch language dialects spoken in Flanders, the northern part of Belgium,[3][4][5] by approximately 6 million people.[6][7][8] They differ to some extent from the Dutch spoken in the Netherlands in terms of intonation and pronunciation, and there are minor differences in vocabulary, including loanwords from French and English not found in Standard Dutch.[2] The term "Flemish" is used in at least five ways. These are, in order of increasing dialect order:

There are four principal Dutch dialects in the Flemish region (Flanders): Brabantian, East Flemish, West Flemish and Limburgish.[9] The latter two are sometimes considered separate (regional) languages.[10] Despite its name, Brabantian is the dominant contributor to the Flemish Dutch tussentaal. The combined region, culture, and people of Dutch-speaking Belgium (which consists of the provinces of West Flanders, East Flanders, Flemish Brabant, Antwerp, and Limburg, and historically of Brussels) has come to be known as "Flemish".[11] "Flemish" is also used to refer to one of the historical languages spoken in the former County of Flanders.[12]

Dutch is the majority language in Belgium, being spoken natively by three-fifths of the population. It is one of the three national languages of Belgium, together with French and German, and is the only official language of the Flemish Region.

The various Dutch dialects spoken in Belgium contain a number of lexical and a few grammatical features which distinguish them from the standard Dutch.[14] As in the Netherlands, the pronunciation of Standard Dutch is affected by the native dialect of the speaker.

All Dutch dialect groups spoken in Belgium are spoken in adjacent areas of the Netherlands as well. East Flemish forms a continuum with both Brabantic and West Flemish. Standard Dutch is primarily based on the Hollandic dialect [15] (spoken in the Western provinces of the Netherlands) and to a lesser extent on Brabantian, which is the dominant dialect in Flanders, as well as in the south of the Netherlands.

The difference between short and long vowels tends to be quantitative instead of qualitative, especially in the influential Brabantic pronunciation.

Belgian Dutch includes different French loanwords in its vocabulary compared to Netherlands Dutch.[17] There are also different Dutch terms for similar things: for example, the former Belgian gendarmerie was known as the Rijkswacht ("Guard of the Realm") in Belgium while the equivalent body in the Netherlands is the Koninklijke Marechaussee ("Royal Military Constabulary").

The traditionally most spoken Dutch dialect in Belgium, Brabantian, has had a large influence on the vocabulary used in Belgium.[18] Examples include beenhouwer (Brabantian) and slager (Hollandic), both meaning butcher (slager is however used in Belgium to mean the kind of butcher who sells salami, sausages, etc.: cf. the difference between beenhouwerij (butcher's shop) and slagerij (delicatessen)); also schoon (Brabantian) vs. mooi (Hollandic) "beautiful": in standard Dutch, schoon means clean, whereas in Belgium it is often used for pretty or beautiful. Another notable difference is ge / gij ("you" in Brabantian and "thou / thee" in the Dutch Bible, originally translated by Belgian Protestants fleeing the Inquisition under Philip II of Spain) vs. je / jij ("you" singular in Hollandic), jullie ("you" plural in Hollandic). The changes (isoglosses) from northern to southern Dutch dialects are somewhat gradual, both vocabulary-wise and phonetically, and the boundaries within coincide with mediaeval territorial borders. There is a distinct boundary located in the river area of the Netherlands, south of which northern variants of Brabantian are spoken, which share phonological traits with the southern variants spoken in Belgium. A second distinct border area is located around the border with the Belgian territories, where the transition is mostly lexical, but also with an intensification of the phonological diversion from northern Dutch. An exception to the border with the Belgian territories for this border is Zeelandic Flanders ("Zeeuws-Vlaanderen"), a part of the Netherlands where Flemish is spoken.

Flemish and Dutch television shows are occasionally subtitled for the other country in their standard language when using informal speech or dialects because of the differences in pronunciation, lexicon and expressions.[19]

In 2009, one of the main publishers of Dutch dictionaries, Prisma, published the first Dutch dictionary that distinguished between the two natiolectic varieties "Nederlands Nederlands" (or "Netherlandish Dutch") and "Belgisch Nederlands" ("Belgian Dutch"), treating both variations as equally correct. The selection of the "Flemish Dutch" words was based on the Referentiebestand Belgisch Nederlands (RBBN): an electronic database built under the supervision of Prof. Dr. W. Martin (Free University in Amsterdam, Netherlands) and Prof. Dr. W. Smedts (Catholic University in Leuven, Belgium).

Professor Willy Martin, one of the Flemish editors, claimed that the latter expressions are "just as correct" as the former. This formed a break with the previous lexicologists' custom of indicating Dutch words that are mostly only used in Flanders, while not doing the same for Dutch words mostly only used in the Netherlands, which could give the impression that only usage in the Netherlands defines the standard language.

In November 2012 the Belgian radio channel Radio 1 wrote a text with words used in Flanders and asked several Dutch speaking people to "translate" it into general Dutch. Almost no inhabitant of the Netherlands was able to make a correct translation, whereas almost all Flemings succeeded.[22][23]

The supra-regional, semi-standardized colloquial form (mesolect) of Dutch spoken in Belgium uses the vocabulary and the sound inventory of the Brabantic dialects. It is often called Tussentaal ("in-between-language" or "intermediate language", intermediate between dialects and standard Dutch).[24]

It is a relatively new phenomenon that has been gaining popularity during the past decades. Some linguists note that it seems to be undergoing a process of (limited) standardisation[25][26] or that it is evolving into a Koiné language.[27]