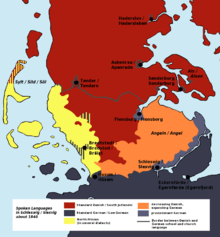 Linguistic map of Schleswig in the mid-19th Century.

North Frisian is a minority language of Germany, spoken by about 30,000 people in North Frisia.[3] The language is part of the larger group of the West Germanic Frisian languages.

The closest relatives of North Frisian are the two other Frisian languages, the Saterland Frisian of north-western Lower Saxony, Germany, and the West Frisian language spoken in the northern Netherlands. Together these three sub-groups form the group of Frisian languages.

The English language is also closely related to Frisian. The two languages are classified in a common Anglo-Frisian group. Anglo-Frisian is grouped among the Ingvaeonic languages together with Low German. The related Low German has developed differently since Old Saxon times and has lost many Ingvaeonic characteristics.[4]

The North Frisian dialects can be grouped into two main dialectal divisions: those of the mainland and the insular dialects. All in all these two groups comprise 10 dialects.[5] The dialect spoken on the Halligen is one of the mainland dialects though. Typically one distinguishes between the following ten dialects that have been spoken since the beginning of Frisian linguistic studies in the 19th century.

The mainland and insular dialects clearly differ from each other because they were shaped by Frisian immigrants during several different centuries. The islands of Sylt, Föhr and Amrum were colonised around 800 while the mainland was settled by Frisians in AD 1100.

Add to this the various influences of neighbouring languages on the dialects. On Sylt, Föhr and Amrum as well as in parts of the northern mainland there is a strong Danish (South Jutlandic) influence, whereas on Heligoland and the rest of mainland North Frisia the Low German influence is predominant. Moreover, there has historically only been a limited exchange between the dialects so that hardly any lingua franca could develop and there was no cultural centre in North Frisia whose dialect would have been able to take a leading role.

The sentence displayed below in many variants reads, "'Shine, old moon, shine!', cried Häwelmann, but the moon was nowhere to be seen and the stars neither; they had all already gone to bed" (from: Theodor Storm: Der kleine Häwelmann).[6]

Halligen Frisian (although it is spoken on the Halligen islands, it is linguistically grouped with the mainland dialects)

Note that, despite the differences between the dialects, the Fering and Öömrang are highly similar; in this example nearly identical.

The following table further demonstrates the similarities and differences between the various dialects.[7]

The Eiderstedt Frisian on the Eiderstedt peninsula were abandoned in favour of Low German during the 17th and 18th centuries. In contrast to the northern hundreds, Eiderstedt was economically strong and wealthy and was oriented towards the southern, Low German parts of Schleswig-Holstein. Moreover, there was a strong Dutch immigration during the 16th century.[8]

A similar situation was to be found on the island of Strand, which was destroyed during the Burchardi flood. The population of the eastern, remaining part of Strand, the modern Nordstrand, did not succeed in rebuilding the dikes on their own. Therefore, many Frisian speaking people left their homeland on Strand or were otherwise not able to maintain their native language against mostly Dutch-speaking immigrants. On Pellworm, the western remainder of Strand, the repair of the dikes was quickly accomplished and so the Frisian language was still spoken in the 18th century, until it also vanished due to changes in population structure. The old Strand Frisian was presumably closest to Halligen Frisian.

Likewise close to Halligen Frisian was the Wyk Frisian that used to be spoken in Wyk auf Föhr until the town completely shifted to Low German. The Wyk dialect is thought to have developed from the dialects of immigrants from the Halligen and Strand island.

The dialect that most recently died out is Southern Goesharde Frisian which became extinct with the death of its last speaker in 1981. Other mainland dialects are also facing extinction.

North of the German-Danish border North Frisian was spoken only in some marsh-farms, located directly at the border.[9]

Due to the large number of dialects there is no original native name for the North Frisian language as such. E.g. the Wiedingharde and Halligen Frisians call their language freesk, in the Bökingharde it is called frasch, and in the Goesharde likewise fräisch or freesch. While these names all translate to "Frisian" the native names of the insular dialects refer to the particular islands as in Fering, Öömrang, Söl'ring or Halunder. E.g. "Frisian" would mean "fresk" in the Föhr dialect.

The North Frisians eventually agreed upon the inter-dialectal name "friisk" which corresponds to the West Frisian native name "frysk". This designation is today mostly used when the North Frisian collectivity is addressed or in the names of official institutions such as Nordfriisk Instituut, Friisk Foriining or Friisk Gesäts. The northern section of the Interfrisian Council has however kept its name "Frasche Rädj" in the Mooring dialect.

Despite the strong differences among the North Frisian dialects there are still some traits of phonology that are more or less common to all dialects. Among them is the vowel reduction from [ɪ] to [a], which is mostly complete in the central dialects, but has only arrived at the stage [ɛ] or [eː] in the periphery. For example, the word "fish" translates to Mooring fasch, Fering-Öömrang fask, but Söl'ring fesk (cf. Low German: Fisch/Fisk, Danish: fisk, German: Fisch, Dutch: vis).

The distribution of the lenition of the unvoiced plosives p, t and k is similar as these consonants have become voiced plosives and partially even developed to fricatives in the central dialects. This can be demonstrated from the verb "to know": Mooring waase, Fering-Öömrang wed, Sölring weet, Halunder wet (cf. West Frisian witte, Low German weten, German wissen).

The North Frisian dialects differ from modern Standard German by a more diverse system of vowels and consonants. All dialects have in common an additional line of palatalizations, which is uncommon for a Germanic language. Until recently an additional number of dental consonants that changed the meaning of a word was known in the dialect of Föhr. In general it can be noted that the insular dialects feature a relatively complicated consonantal system while the mainland dialects have more diverse vowels.

As a recent development, the phonological system of the North Frisian dialects is strongly being influenced by Standard German and is slowly adapting to the system of the German language.[10]

Officially the number of North Frisian speakers ranges from 8,000 to 10,000[3] but linguists propose significantly lower numbers. In 2007, Århammar estimated a total of 5,000 speakers within and 1,500 to 2,000 speakers outside North Frisia proper.[5] Exact surveys do not exist.

North Frisian is an endangered language, as in most places children no longer learn it. In UNESCO's Red Book of Endangered Languages, North Frisian is classified as "seriously endangered".[11] Exceptions are a few villages on the islands of Föhr and Amrum and the Risum-Lindholm area. Especially in the western parts of Föhr, the language community is still relatively sound.[5] The number of speakers on Föhr and Amrum alone is estimated to around 3,500. The other dialects are in fact seriously endangered, like Karrharde Frisian, Central Goesharde and Halligen Frisian.

The elementary and grammar school on Amrum is called Öömrang Skuul and among other subjects focuses on teaching the local dialect. Fering is also taught in schools on Föhr and the Risum Skole/Risem Schölj in Risum-Lindholm on the mainland is a combined Danish-Frisian elementary school.