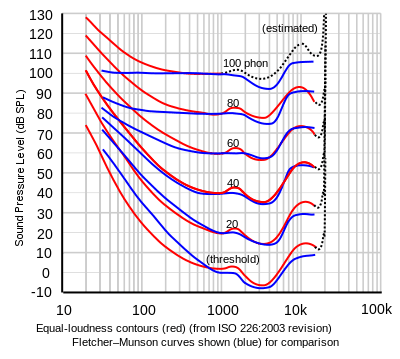 The Fletcher–Munson curves are one of many sets of equal-loudness contours for the human ear, determined experimentally by Harvey Fletcher and Wilden A. Munson, and reported in a 1933 paper entitled "Loudness, its definition, measurement and calculation" in the Journal of the Acoustic Society of America.[1]

The first research on the topic of how the ear hears different frequencies at different levels was conducted by Fletcher and Munson in 1933. In 1937 they created the first equal-loudness curves.[2] Until recently, it was common to see the term 'Fletcher–Munson' used to refer to equal-loudness contours generally, even though a re-determination was carried out by Robinson and Dadson in 1956, which became the basis for an ISO 226 standard.

It is now better to use the generic term "equal-loudness contours", especially as a recent survey by ISO redefined the curves in a new standard. [3]

According to the ISO report, the Robinson–Dadson results were the odd one out, differing more from the current standard than did the Fletcher Munson curves. The report states that it is fortunate that the 40-phon Fletcher–Munson curve on which the A-weighting standard was based turns out to have been in agreement with modern determinations.

The article also comments on the large differences apparent in the low-frequency region, which remain unexplained. Possible explanations are: