Musical acoustics or music acoustics is a branch of acoustics concerned with researching and describing the physics of music – how sounds are employed to make music. Examples of areas of study are the function of musical instruments, the human voice (the physics of speech and singing), computer analysis of melody, and in the clinical use of music in music therapy.

Methods and fields of study Whenever two different pitches are played at the same time, their sound waves interact with each other – the highs and lows in the air pressure reinforce each other to produce a different sound wave. As a result, any sound wave that is not a sine wave can be modeled by many different sine waves of the appropriate frequencies and amplitudes (a frequency spectrum). In humans the hearing apparatus (composed of the ears and brain) can usually isolate these tones and hear them distinctly. When two or more tones are played at once, a variation of air pressure at the ear "contains" the pitches of each, and the ear and/or brain isolate and decode them into distinct tones.

Variations in air pressure against the ear drum, and the subsequent physical and neurological processing and interpretation, give rise to the subjective experience called sound. Most sound that people recognize as musical is dominated by periodic or regular vibrations rather than non-periodic ones; that is, musical sounds typically have a definite pitch). The transmission of these variations through air is via a sound wave. In a very simple case, the sound of a sine wave, which is considered the most basic model of a sound waveform, causes the air pressure to increase and decrease in a regular fashion, and is heard as a very pure tone. Pure tones can be produced by tuning forks or whistling. The rate at which the air pressure oscillates is the frequency of the tone, which is measured in oscillations per second, called hertz. Frequency is the primary determinant of the perceived pitch. Frequency of musical instruments can change with altitude due to changes in air pressure.

*This chart only displays down to C0, though some pipe organs, such as the Boardwalk Hall Auditorium Organ, extend down to C−1 (one octave below C0). Also, the fundamental frequency of subcontrabass tuba is B♭−1, 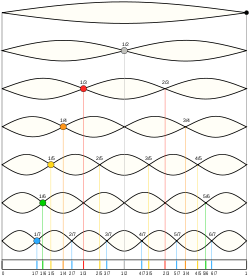 Overtones that are perfect integer multiples of the fundamental are called harmonics. When an overtone is near to being harmonic, but not exact, it is sometimes called a harmonic partial, although they are often referred to simply as harmonics. Sometimes overtones are created that are not anywhere near a harmonic, and are just called partials or inharmonic overtones.

The fundamental frequency is considered the first harmonic and the first partial. The numbering of the partials and harmonics is then usually the same; the second partial is the second harmonic, etc. But if there are inharmonic partials, the numbering no longer coincides. Overtones are numbered as they appear above the fundamental. So strictly speaking, the first overtone is the second partial (and usually the second harmonic). As this can result in confusion, only harmonics are usually referred to by their numbers, and overtones and partials are described by their relationships to those harmonics. 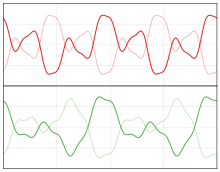 When a periodic wave is composed of a fundamental and only odd harmonics (f, 3f, 5f, 7f, ...), the summed wave is half-wave symmetric; it can be inverted and phase shifted and be exactly the same. If the wave has any even harmonics (0f, 2f, 4f, 6f, ...), it is asymmetrical; the top half is not a mirror image of the bottom.

If two notes are simultaneously played, with frequency ratios that are simple fractions (e.g. 2/1, 3/2 or 5/4), the composite wave is still periodic, with a short period—and the combination sounds consonant. For instance, a note vibrating at 200 Hz and a note vibrating at 300 Hz (a perfect fifth, or 3/2 ratio, above 200 Hz) add together to make a wave that repeats at 100 Hz: every 1/100 of a second, the 300 Hz wave repeats three times and the 200 Hz wave repeats twice. Note that the total wave repeats at 100 Hz, but there is no actual 100 Hz sinusoidal component.

The combination of composite waves with short fundamental frequencies and shared or closely related partials is what causes the sensation of harmony. When two frequencies are near to a simple fraction, but not exact, the composite wave cycles slowly enough to hear the cancellation of the waves as a steady pulsing instead of a tone. This is called beating, and is considered unpleasant, or dissonant.

The difference between consonance and dissonance is not clearly defined, but the higher the beat frequency, the more likely the interval is dissonant. Helmholtz proposed that maximum dissonance would arise between two pure tones when the beat rate is roughly 35 Hz.

The material of a musical composition is usually taken from a collection of pitches known as a scale. Because most people cannot adequately determine absolute frequencies, the identity of a scale lies in the ratios of frequencies between its tones (known as intervals).

The diatonic scale appears in writing throughout history, consisting of seven tones in each octave. In just intonation the diatonic scale may be easily constructed using the three simplest intervals within the octave, the perfect fifth (3/2), perfect fourth (4/3), and the major third (5/4). As forms of the fifth and third are naturally present in the overtone series of harmonic resonators, this is a very simple process.

The following table shows the ratios between the frequencies of all the notes of the just major scale and the fixed frequency of the first note of the scale.

There are other scales available through just intonation, for example the minor scale. Scales that do not adhere to just intonation, and instead have their intervals adjusted to meet other needs are called temperaments, of which equal temperament is the most used. Temperaments, though they obscure the acoustical purity of just intervals, often have desirable properties, such as a closed circle of fifths.