The term subharmonic is used in music and dynamics in a few different ways. In its pure sense, the term subharmonic refers strictly to any member of the subharmonic series (1/1, 1/2, 1/3, 1/4, etc.). When the subharmonic series is used to refer to frequency relationships, it is written with f representing some highest known reference frequency (f/1, f/2, f/3, f/4, etc.). The complex tones of acoustic instruments do not produce partials that resemble the subharmonic series. However, such tones can be produced artificially with audio software and electronics. Subharmonics can be contrasted with harmonics. While harmonics can "...occur in any nonlinear system", there are "...only fairly restricted conditions" that will lead to the "nonlinear phenomenon known as subharmonic generation." [2] One way to define subharmonics is that they are "...integral submultiples of the fundamental (driving) frequency." [2]

In a second sense, subharmonic does not relate to the subharmonic series, but instead describes an instrumental technique for lowering the pitch of an acoustic instrument below what would be expected for the resonant frequency of that instrument, such as a violin string that is driven and damped by increased bow pressure to produce a fundamental frequency lower than the normal pitch of the same open string. The human voice can also be forced into a similar driven resonance, also called “undertone singing” (which similarly has nothing to do with the undertone series), to extend the range of the voice below what is normally available. However, the frequency relationships of the component partials of the tone produced by the acoustic instrument or voice played in such a way still resemble the harmonic series, not the subharmonic series. In this sense, “subharmonic” is a term created by reflection from the second sense of the term “harmonic”, which in that sense refers to an instrumental technique for making an instrument’s pitch seem higher than normal by eliminating some lower partials by damping the resonator at the antinodes of vibration of those partials (such as placing a finger lightly on a string at certain locations).

In a very loose third sense, “subharmonic” is sometimes used or misused to represent any frequency lower than some other known frequency or frequencies, no matter what the frequency relationship is between those frequencies and no matter the method of production.

Methods for producing an undertone series

The overtone series can be produced physically in two ways—either by overblowing a wind instrument, or by dividing a monochord string. If a monochord string is lightly damped at the halfway point, then at 1/3, then 1/4, 1/5, etc., then the string will produce the overtone series, which includes the major triad. If instead, the length of the string is doubled in the opposite ratios, the undertones series is produced. Similarly, on a wind instrument, if the holes are equally spaced, each successive hole covered will produce the next note in the undertone series.

In addition, José Sotorrio showed that undertones could be made through the use of a simple oscillator such as a tuning fork. If that oscillator is gently forced to vibrate against a sheet of paper "it will naturally make contact at various audible modes of vibration."[3] Sotorrio explained that since the tuning fork produces a sine tone, it will normally vibrate at the fundamental frequency (e.g. 440 Hz), but "momentarily", it will make contact only at every other oscillation (220 Hz), or at every third oscillation (147 Hz), and so on. This produces audible "subharmonic spectra", (e.g. below A@440 Hz (1/1), A@220 Hz (1/2), D@147 Hz(1/3), A@110 Hz(1/4), F@88 Hz(1/5), and so on). Sotorrio claims it is possible to sustain these "subspectra" using a sine wave generator through a speaker cone making contact with a flexible (flappable) surface, and also on string instruments "through skillful manipulation of the bow", but that this rarely sustains noticeably beyond the "sub-octave or twelfth".[3]

String quartets by composers George Crumb and Daniel James Wolf as well as works by violinist and composer Mari Kimura require string instrument players to bow with sufficient pressure that the strings vibrate [4] causing the sound waves to modulate and demodulate by the instruments resonating horn with frequencies corresponding to subharmonics.

The tritare, a guitar with Y shaped strings, cause subharmonics too. This can also be achieved by the extended technique of crossing two strings as some experimental jazz guitarists have developed. Also third bridge preparations on guitars cause timbres consisting of sets of high pitched overtones combined with a subharmonic resonant tone of the unplugged part of the string.

Subharmonics can be produced by signal amplification through loudspeakers.[5]

Comparison to the overtone series 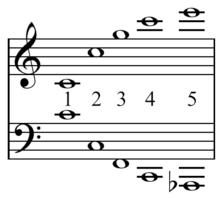 Play major chord on C , and

Subharmonic frequencies are frequencies below the fundamental frequency of an oscillator in a ratio of 1/n, with n a positive integer number. For example, if the fundamental frequency of an oscillator is 440 Hz, sub-harmonics include 220 Hz (1/2), ~146.6 Hz (1/3) and 110 Hz (1/4). Thus, they are a mirror image of the harmonic series, the undertone series.

Notes in the series

If the first five notes of both series are compared, a pattern is seen:

The undertone series in C contains the F minor triad. Elizabeth Godley argued that the minor triad is also implied by the undertone series and is also a naturally occurring thing in acoustics.[7] "According to this theory the upper and not the lower tone of a minor chord is the generating tone on which the unity of the chord is conditioned."[8] Whereas the major chord consists of a generator with upper major third and perfect fifth, the minor chord consists of a generator with lower major third and fifth.[8] Sotorrio, however, said that since this minor triad is not built under the fundamental (C) but under the fifth below (F), major and minor tonalities cannot be said to grow out of this 'polarity'.[3] For this idea to be true, the minor triad would be formed under the Fundamental (C), or else the major triad would be built on the fifth above the fundamental (G) in the overtone series.

Hermann von Helmholtz observed in On the Sensations of Tone that the tone of a string tuned to C on a piano changes more noticeably when the notes of its undertone series (c, F, C, A flat, F, D, C, etc.) are struck than those of its overtones. Helmholtz argued that sympathetic resonance is at least as active in under partials as in over partials.[9] Henry Cowell in "New Musical Resources" (pg 21-23) discusses a "Professor Nicolas Garbusov of the Moscow Institute for Musicology" who created an instrument "on which at least the first nine undertones could be heard without the aid of resonators." The phenomenon is described as occurring in resonators of instruments; "the original sounding body does not produce the undertones but it is difficult to avoid them in resonation...such resonators under certain circumstances respond to only every other vibration producing a half tone.. even if the resonator responds normally to every vibration... under other circumstances the body resonates at only every third vibration...the fact that such underpartials are often audible in music makes them of importance in understanding certain musical relationships...the subdominant... the minor triad."

Minor as upside down major.

Harry Partch, on the other hand, argued that the overtone series and the undertone series are equally fundamental, and his concept of Otonality and Utonality is based on this idea.[11] Similarly, Graham H. Jackson in his book The Spiritual Basis of Musical Harmony (2006)[12] suggests that the overtone and undertone series must be seen as a real polarity, representing on the one hand the outer "material world" and on the other, our subjective "inner world". This view is largely based on the fact that the overtone series has been accepted because it can be explained by materialistic science, while the prevailing conviction about the undertone series is that it can only be achieved by taking subjective experience seriously. For instance, the minor triad is usually heard as sad, or at least pensive, because humans habitually hear all chords as based from below. If feelings are instead based on the high "fundamental" of an undertone series, then descending into a minor triad is not felt as melancholy, but rather as overcoming, conquering something. The overtones, by contrast, are then felt as penetrating from outside. With the help of Rudolf Steiner’s work, Jackson traces the history of these two series, as well as the main other system created by the circle of fifths, and argues that in hidden form the series are balanced out in Bach's harmony.

Kathleen Schlesinger, in her 1939 book, The Greek Aulos, pointed out that since the ancient Greek aulos, or reed-blown flute, had holes bored at equal distances, it must have produced a section of the undertone series. She said that this discovery not only cleared up many riddles about the original Greek modes, but indicated that many ancient systems around the world must have also been based on this principle.

In 1868, Adolf von Thimus showed that an indication by a 1st-century Pythagorean, Nicomachus of Gerasa, taken up by Iamblichus in the 4th century, and then worked out by von Thimus, revealed that Pythagoras already had a diagram that could fill a page with interlocking over- and undertone series.[13]