Association football is the most popular sport in Brazil. The Brazilian national football team has won the FIFA World Cup tournament five times, the most of any team, in 1958, 1962, 1970, 1994 and 2002,[4] and is the only team to succeed in qualifying for every World Cup competition ever held. It is among the favorites to win the trophy every time the competition is scheduled. After Brazil won its 3rd World Cup in 1970, they were awarded the Jules Rimet Trophy permanently. But 365 days before World Cup 2014 began, Brazil's rank dropped to 22nd, an all-time-low position.[5] Brazil has also won an Olympic Gold Medal in the 2016 Rio Olympics. [6]

Pelé, arguably the greatest footballer ever, led Brazil to three of those championships and is the top scorer of all time in the sport. All of the leading players in the national teams are prominent in the football world, including Garrincha, Cafu, Roberto Carlos, Romário, Rivaldo, Ronaldo, Ronaldinho, and Kaká in the men's game, and Marta in the women's game. Some of these players can be considered super-stars, achieving celebrity status internationally and signing sports contracts, as well as advertisement and endorsement contracts, in the value of millions of euros.

The governing body of football in Brazil is the Brazilian Football Confederation.

Football was introduced to Brazil by a Scottish expatriate named Thomas Donohoe.[1] The first football match played in Brazil was in April 1894, played on a pitch marked out by Donohoe next to his workplace in Bangu.[1]

In the 1870s, like many other British workers, a Scottish expatriate named John Miller worked on the railway construction project in São Paulo with other European immigrants.[7][8][9] In 1884, Miller sent his 10-year-old son Charles William Miller to Bannister School in Southampton, England to be educated. Charles was a skilled athlete who quickly picked up the game of football at the time when the Football League was still being formed, and as an accomplished winger and striker Charles held school honors that gained him entry into the Southampton Football Club team, and later into the County team of Hampshire.

In 1888, the first sports club was founded in the city, São Paulo Athletic Club. In 1892, while still in England, Charles was invited to play a game for Corinthian F.C., a team formed of players invited from public schools and universities. On his return to Brazil, Charles brought some football equipment and a rule book with him. He then taught the rules of the game to players in São Paulo. São Paulo Athletic Club won the first 3 year's championships. Miller's skills were far above his colleagues at this stage. He was given the honor of contributing his name to a move involving a deft flick of the Ball with the heel "Chaleira" (the "tea-pot"). The first match played by one of Miller's teams was six months after Donohoe's.[1] 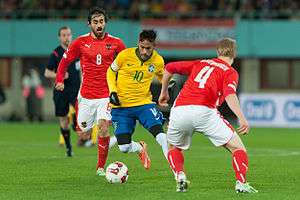 Charles Miller kept a strong bond with English football throughout his life. Teams from Southampton and Corinthians travelled to Brazil to play against São Paulo Athletic Club and other teams in the city of São Paulo. After a tour of Corinthians F.C. to Brazil in 1910, a new team in Brazil took on the name of Corinthians after a suggestion from Miller.

The Brazilian Football Confederation was founded in 1914, but the current format for the Campeonato Brasileiro was only established in 1959.

In 1988, Sport Club Corinthians Paulista celebrated playing the English side Corinthian-Casuals F.C at the Morumbi Stadium. The Casuals finished its tour by going against the local professional Sport Club Corinthians Paulista team, who counted the likes of Sócrates and Rivelino amongst its roster, at Pacaembu Stadium in São Paulo. To celebrate their shared history, Socrates changed shirts to play alongside the English amateurs when the score was 1-0 in favor of the locals. This did not affect the score, although a largely packed stadium was cheering on for a drawn result.

It was announced that on September 29, 2007, that the CBF would launch a Women's Association Football league and cup competition in October 2007 following pressure from FIFA president Sepp Blatter during the 2007 FIFA Women's World Cup in China.[10][11]

In 2014, Brazil was one of the eight nations to take part in the first Unity World Cup. The team played the opening game with notable players such as Beto, Fabio Luciano and Carlos Luciano da Silva. 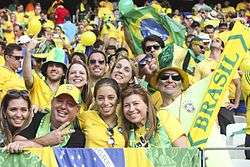 Football is the most popular sport in Brazil. Football quickly became a passion for Brazilians, who often refer to their country as "o País do Futebol" ("the country of football"). Over 10,000 Brazilians play professionally all over the world.[12]

Football has a major effect on Brazilian Culture. It is the favorite pastime of youngsters playing football on the streets and indoor Futebol de Salão fields. The World Cup draws Brazilians together, with people skipping work to view the national team play, or employers setting up places for employees to watch. The General Elections are usually held in the same year as the World Cup, and critics argue that political parties try to take advantage of the nationalistic surge created by football and bring it into politics. Former Brazilian footballers are often elected to legislative positions.

One unique aspect of football in Brazil is the importance of the Brazilian State Championships. For much of the early development of the game in Brazil, the nation's size and the lack of rapid transport made national competitions unfeasible, so the competition centered on state tournaments and inter-state competitions like the Torneio Rio-São Paulo. Nowadays, there is, however, a growing tendency of devaluation of the importance of such championships as continental and national competitions have grown in relevance since the early 90s.

Brazil plays a very unfundamental and distinctive style.[13][14][15][16] For example, dribbling is an essential part of their style. Many people criticized the Brazilian coach Dunga because of the pragmatist, fundamental, defensive-minded style he brought to Brazil.[17] After Brazil's failure at the 2010 FIFA World Cup, Dunga was fired and Mano Menezes became the head coach. With the aid of young talents such as Neymar, Lucas, Paulo Henrique Ganso, Oscar and many more, Brazil strives to return to its creative style.[18]

The great exodus of players in recent years to European competitions is scene of much debate in the country, especially about the consequences that this would generate in the style of Brazilian football.

Football is broadcast in television in the following channels:

There is a four tier league system.

There are also State Championships which are not hierarchically below the national league, however, they are used for the purposes of promoting clubs to the National Leagues.