The Recopa Santander Sudamericana (Portuguese: Recopa Santander Sul-Americana), known also as the Recopa Sudamericana and simply as the Recopa (Spanish: [reˈkopa], Portuguese: [ʁɛˈkɔpɐ]; "Winner's Cup"), is an annual international club football competition organized by CONMEBOL since 1988. It is a match-up between the champions of the previous year's Copa Libertadores and the Copa Sudamericana, South America's premier club competitions.

The competition has had several different formats over its lifetime. Initially, the champions of the Copa Libertadores and Supercopa Libertadores contested it. In 1998, the Supercopa Libertadores was discontinued and the Recopa went into a hiatus. The competition has been disputed with either a presently-used two-legged series or a single match-up at a neutral venue. Together with the aforementioned tournaments, a club has the chance to win the CONMEBOL Treble all in one year or season.[1] (Brazilian teams, however, play either Libertadores or Sudamericana each year, with an exception only when a Brazilian team wins Sudamericana and qualifies for both competitions in the next year.)

The most recent champion of the competition is Argentine club River Plate, after beating Santa Fe 2–1 on aggregate in the 2016 edition. Argentine club Boca Juniors is the most successful club in the cup history, having won the tournament four times. Brazilian clubs have accumulated the most victories with nine wins while Brazil has the most different winning teams, with seven clubs having won the title. The cup has been won by 16 different clubs and won consecutively by four clubs: Brazil's São Paulo, Ecuador's LDU Quito, Argentina's Boca Juniors and River Plate successfully defended the title in 1994, 2006, 2010 and 2016, respectively.

In 1992, and from 1994 to 1997, the competition was played in Japan. Colo-Colo of Chile defeated Cruzeiro 5–4 on penalties after a 0–0 tie in the 1992 final.[5] Staying true to the winning ways of the Paulista's golden generation, São Paulo won the 1993 and 1994 finals to become the first team to retain the title. Due to schedule congestion, the 1993 finals were played as part of the Campeonato Brasileiro and it also became the first Recopa to feature two teams from the same nation.[6] In a second, consecutive all-Brazilian final, São Paulo successfully defended the trophy against Botafogo. Since São Paulo won both the Copa Libertadores and Supercopa Sudamericana, CONMEBOL had Copa CONMEBOL winners Botafogo dispute the Recopa Sudamericana only to lose 3–1 to the defending champions.[7]

Argentina managed to emulate their northern neighbors with the 1995 edition being an all-Argentinian affair. Independiente, led by Jorge Burruchaga, managed to consecrate themselves winners after defeating Carlos Bianchi's legendary Vélez Sársfield 1–0 in Tokyo. Independiente participated in a second, consecutive final only to lose the title to Grêmio after being defeated 4–1.[8] The 1997 edition was won by a Vélez Sársfield team that bowed out from the international limelight with their last title.[9] Having failed to win the trophy in 1992 and 1993, Cruzeiro comfortably won the 1998 edition that was played as part of the Copa Mercosur. This final series was played two years after the participating teams won their corresponding qualifying tournaments.[10]

At the end of the 1998 season, CONMEBOL discontinued the Supercopa Sudamericana. As a result of not having an important, secondary tournament, the Recopa Sudamericana went into a hiatus from 1999 until 2002. However, the introduction of the new Copa Sudamericana revitalized the competition with Olimpia winning the 2003 final in Los Angeles.[11] Played on a neutral venue for the second year in a row, Cienciano defeated Boca Juniors on penalties to win their second international title.[12] From 2005 onwards, the Recopa Sudamericana would be played on a home-and-away basis.

In a rematch of the Copa Libertadores final of 2004, Boca Juniors avenged that defeat as they beat Once Caldas 4–3 on aggregate.[3] A year later, Boca Juniors faced São Paulo, both two-time winners of the competition, in order to determine who would become the first tricampeon. The Xeneizes won 4–1 on points and successfully defended the title, becoming the first side since Telê Santana's São Paulo to win consecutive Recopas.[3] Internacional became the first Brazilian side to lift the trophy in nine years.[13] The 2008 competition saw Boca Juniors win their fourth title to become joint leaders for most international titles won by a club in a last hurrah on the international scene.[3] LDU Quito won their second international title as they thumped Internacional 6–0 on points and 4–0 on goal aggregate to win their first ever title.[14] LDU Quito then successfully defended their title in 2010 against Estudiantes. They became the third team to successfully defend the title.

Unlike most other competitions around the world, the Recopa Sudamericana do not use extra time, an additional period of play specified under the rules of a sport to bring a game to a decision and avoid declaring the match a tie or draw, or away goals, a method of breaking ties in football and other sports when teams play each other twice, once at each team's home ground, to decide a tie that was level on aggregate.[15]

Since the competition takes place in the mid-winter, it's disputed between the champions of the previous year's forementioned competitions. Because of this, some count the year of the championship by the qualification year rather than that of the competition itself. Thus, CONMEBOL states that Nacional from Uruguay won the first Recopa of 1989, whereas the RSSSF refers to that championship as Recopa 1988.[17][18]

The Recopa Sudamericana trophy has not undergone many changes in its history. The trophy consists of a gold-coated body with a pedestal. The body consists of an Adidas Tango ball, a successful family and brand of association footballs. It was first introduced as the Tango Durlast in 1978 for the 1978 FIFA World Cup in Argentina. The ball is hoisted by a golden, cylindrical body with four quadrilateral edges sticking out of the body at 45 degrees from each other. The pedestal is separated into two parts; the top part of the pedestal consists of the CONMEBOL emblem. The bottom part of the pedestal contains a gold badge underneath the CONMEBOL emblem with the phrase, "RECOPA", imprinted into it. To the left and right, badges of previous winners are placed.

A team which wins 3 times in a row, receives an original copy of the trophy and a special mark of recognition. 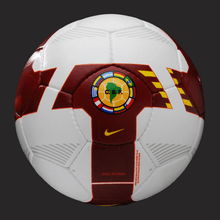 The current match ball for the Recopa Sudamericana, manufactured by Nike, is named the Total 90 Omni CSF.[19][20] It is one of the many balls produced by the American sports equipment maker for CONMEBOL, replacing the Mercurial Veloci Hi-Vis in 2009.[21] The ball, approved by FIFA and weighing approximately 422 g, has a spherical shape that allows the ball to fly faster, farther, and more accurately.[20] According to Nike, the ball's geometric precision distributes pressure evenly across panels and around the ball. The compressed polyethylene layer stores energy from impact and releases it at launch, and the 6-wing carbon-latex air chamber improves acceleration.[20] Another feature of the ball is its rubber layer; it was designed to allow a better response while retaining the impact energy and releases it in the coup.[20] Its support material of cross-linked nitrogen-expanded foam improves its retention and durability of its shape.[20] Polyester support fabric enhances structure and stability. The asymmetrical high-contrast graphic around the ball creates an optimal flicker as the ball rotates for a more powerful visual signal, allowing the player to more easily identify and track the ball.[20] 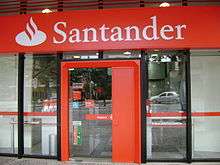 Banco Santander is the primary sponsor of the Recopa Sudamericana.

However, the competition has had many secondary sponsors that invest in the tournament as well. Many of these sponsors are nationally based but have expanded to other nations. Nike supplies the official match ball, as they do for all other CONMEBOL competitions.[20] Individual clubs may wear jerseys with advertising, even if such sponsors conflict with those of the Recopa Sudamericana.[15]

The tournament's current secondary sponsors and brands advertised (in italic) are: 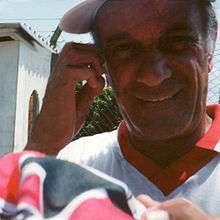 Telê Santana is one of four managers to win two record Recopa Sudamericana medals, and the first to earn them consecutively. 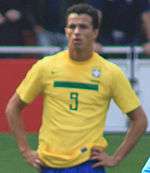 Leandro Damião, as well as Rodrigo Palacio, is joint record holder of most goals scored in a season with three goals.

Argentines Sebastián Battaglia, Neri Cardozo, Rodrigo Palacio, and Jesús Dátolo and Paraguayan Claudio Morel Rodríguez are the only players to have won three Recopa Sudamericana winners' medals. The overall top goalscorer in Recopa Sudamericana history is Rodrigo Palacio, scorer of five goals. Leandro Damião is second with 3 goals. Rodrigo Palacio and Leandro Damião hold the record for the most goals scored in a single Recopa Sudamericana. Each of their three goals was scored in the 2006 and 2010 finals, respectively. Claudio Morel Rodríguez is the player with most appearances in the competition, 5 editions (winning three finals), all of them in Boca Juniors with the exception of 2003 (played for San Lorenzo). Paraguayan Julio César Cáceres, Argentine Jesús Dátolo and Brazilian André are the only players that won the Recopa Sudamericana with two different teams. Cáceres won in 2003 with Olimpia and 2008 with Boca Juniors, Dátolo won in 2006 and 2008 with Boca and in 2014 with Atlético Mineiro, and André won in 2012 with Santos and 2014 with Atlético Mineiro.

Brazilians Telê Santana and Levir Culpi, Uruguayan Luis Cubilla, and Argentine Alfio Basile are the only head coaches to ever win two Recopa Sudamericana. All Recopa Sudamericana winning head coaches were natives of the country they coached to victory except for Cubilla, Mirko Jozić, Jorge Fossati and Edgardo Bauza. Croatian Jozić, who won the 1992 edition with Chile's Colo-Colo, has the distinction and honor of being the only non-South American coach to win the tournament.