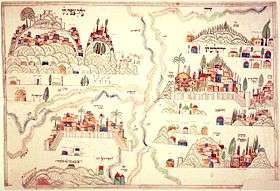 Nineteenth-century out-of scale map of Judaism's four holy cities, with Jerusalem occupying the upper right quadrant, Hebron beneath it, the Jordan River running top to bottom, Safed in the top left quadrant, and Tiberias beneath it. Each of the four cities includes representations of the sacred shrines, as well as the graves of sainted rabbis and holy men.

The Four Holy Cities (Hebrew: ארבע ערי הקודש‎‎, Yiddish: פיר רוס שטעט‎) is the collective term in Jewish tradition applied to the cities of Jerusalem, Hebron, Safed and, later, Tiberias, the four main centers of Jewish life after the Ottoman conquest of Palestine.[1] The "holy cities" concept dates to the 1640s,[1] with Tiberias joining in 1740,[1] resulting from the creation of an association between the cities for the collection of halukka (funds for the needy).

According to the 1906 Jewish Encyclopedia: "Since the sixteenth century the Holiness of Palestine, especially for burial, has been almost wholly transferred to four cities—Jerusalem, Hebron, Tiberias, and Safed."[2]