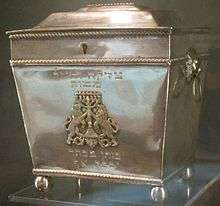 Tzedakah [tsedaˈka] or Ṣ'daqah [sˤəðaːˈqaː] in Classical Hebrew (Hebrew: צדקה‎‎; Arabic: صدقة‎‎), is a Hebrew word literally meaning justice or righteousness but commonly used to signify charity,[1] though it is a different concept from charity because tzedakah is an obligation and charity is typically understood as a spontaneous act of goodwill and a marker of generosity. It is based on the Hebrew word (צדק, Tzedek) meaning righteousness, fairness or justice, and it is related to the Hebrew word Tzadik meaning righteous as an adjective (or righteous individual as a noun in the form of a substantive). In Judaism, tzedakah refers to the religious obligation to do what is right and just, which Judaism emphasises are important parts of living a spiritual life. Maimonides says that, while the second highest form of tzedakah is to give donations anonymously to unknown recipients, the highest form is to give a gift, loan, or partnership that will result in the recipient supporting himself instead of living upon others. Unlike philanthropy or charity, which is completely voluntary, tzedakah is seen as a religious obligation, which must be performed regardless of financial standing, and must even be performed by poor people. Tzedakah is considered to be one of the three main acts that can annul a less than favorable heavenly decree. The term is synonymous with Sadaqah or Saddka (Arabic: صدقة ), an Islamic term meaning "voluntary charity".

The Hebrew Bible teaches the obligation to aid those in need, but does not employ one single term for this obligation.[2] The term tzedekah occurs 157 times in the Masoretic Text, typically in relation to "righteousness" per se, usually in the singular, but sometimes in the plural tzedekot, in relation to acts of charity.[3] In the Septuagint this was sometimes translated eleemosyne, "almsgiving."[4][5]

In rabbinical literature of the classical and Middle Ages

In classical rabbinical literature, it was argued that the Biblical regulations concerning left-overs only applied to corn fields, orchards, and vineyards, and not to vegetable gardens; the classical rabbinical writers were much stricter in regard to who could receive the remains. It was stated that the farmer was not permitted to benefit from the gleanings, and was not permitted to discriminate among the poor, nor try to frighten them away with dogs or lions (Hullin 131a, Pe'ah 5:6)[6] the farmer was not even allowed to help one of the poor to gather the left-overs. However, it was also argued that the law was only applicable in Canaan, (Jerusalem Talmud. Pe'ah 2:5) although many classical rabbinical writers who were based in Babylon observed the laws there (Hullin 134b)[7] it was also seen as only applying to Jewish paupers, but poor non-Jews were allowed to benefit for the sake of civil peace (Gittin 59b).

Maimonides lists his Eight Levels of Giving, as written in the Mishneh Torah, Hilkhot matanot aniyim ("Laws about Giving to Poor People"), Chapter 10:7–14:

In practice, most Jews carry out tzedakah by donating a portion of their income to charitable institutions, or to needy people that they may encounter; the perception among many modern day Jews is that if donation of this form is not possible, the obligation of tzedakah still requires that something be given. Traditional Jews commonly practice ma'aser kesafim, tithing 10% of their income to support those in need.

Special acts of tzedakah are performed on significant days; at weddings, Jewish brides and bridegrooms would traditionally give to charity, to symbolise the sacred character of the marriage; at Passover, a major holiday in Jewish tradition, it is traditional to be welcoming towards hungry strangers, and feed them at the table; at Purim it is considered obligatory for every Jew to give food to one other person, and gifts to at least 2 poor people,[8] in an amount that would equate to a meal each, for the purpose of increasing the total happiness during the month.

As for the more limited form of tzedakah expressed in the biblical laws, namely the leaving of gleanings from certain crops, the Shulchan Aruch argues that during the exile Jewish farmers are not obliged to obey it.[9] Nevertheless, in modern Israel, rabbis of Orthodox Judaism insist that Jews allow gleanings to be consumed by the poor and by strangers, and all crops (not just gleanings) by anyone and everyone (free, not bought nor sold) during sabbatical years.[10]

In addition, one must be very careful about how one gives out tzedakah money. It is not sufficient to just give to anyone or any organization, rather, one must check the credentials and finances to be sure that your Tzedakah money will be used wisely, efficiently and effectively "Do not steal from a poor person, for (s)he is poor," (Proverbs 22:22) and from Talmudic-era commentaries including Numbers Rabba 5:2. It is taught that Tzedakah money was never yours to begin with, rather, it always belongs to God, who merely entrusts you with it so that you may use it properly. Hence it is your obligation to ensure that it is received by those deserving of it.

Gaon of Vilna considered about giving Tzedaqah to all householders in our city with tax-benefit.