This article is about the English word Jew. For the Jewish people, see Jews.

The term Jew passed into the English language from the Greek Ioudaios and Latin Iudaeus, from which the Old French giu was derived after dropping the letter "d", and later after a variety of forms found in early English (from about the year 1000) such as: Iudea, Gyu, Giu, Iuu, Iuw, Iew developed into the English word “Jew.” It thus ultimately originates in the Biblical Hebrew word Yehudi meaning "from the Tribe of Judah", "from the Kingdom of Judah", or "Jew". The Jewish ethnonym in Hebrew is יהודים‎, Yehudim (plural of יהודי‎, Yehudi). 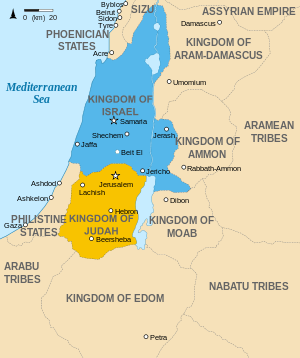 Map of the region in the 9th century BCE

Yehudi in the Hebrew Bible

According to the Book of Genesis, Judah (יְהוּדָה‎, Yehudah) was the name of the fourth son of the patriarch Jacob. During the Exodus, the name was given to the Tribe of Judah, descended from the patriarch Judah. After the conquest and settlement of the land of Canaan, Judah also referred to the territory allocated to the tribe. After the splitting of the united Kingdom of Israel, the name was used for the southern kingdom of Judah. The kingdom now encompassed the tribes of Judah, Benjamin and Simeon, along with some of the cities of the Levites. With the destruction of the northern kingdom of Israel (Samaria), the kingdom of Judah became the sole Jewish state and the term y'hudi (יהודי‎) was applied to all Israelites. When the word makes its first appearance in writing (in the book of Esther) its meaning has already expanded to include converts to the Jewish religion as well as descendants of Israelites.

The term Yehudi (יְהוּדִי‎) occurs 74 times in the Masoretic text of the Hebrew Bible. The plural, Yehudim (הַיְּהוּדִים‎) first appears in 2 Kings 16:6 where it refers to a defeat for the Yehudi army or nation, and in 2 Chronicles 32:18, where it refers to the language of the Yehudim (יְהוּדִית‎). Jeremiah 34:9 has the earliest singular usage of the word Yehudi. In Esther 2:5-6, the name "Yehudi" (יְהוּדִי‎) has a generic aspect, in this case referring to a man from the tribe of Benjamin:

"There was a man a Yehudi (Jewish man) in Shushan the capital, whose name was Mordecai the son of Jair the son of Shimei the son of Kish, a Benjamite; who had been exiled from Jerusalem with the exile that was exiled with Jeconiah, king of Judah, which Nebuchadnezzar, king of Babylon, had exiled."

The name appears in the Bible as a verb in Esther 8:17 which states:

"Many of the people of the land became Yehudim (in the generic sense) (מִתְיַהֲדִים‎, mityahadim) because the fear of the Yehudim fell on them."

In some places in the Talmud the word Israel(ite) refers to somebody who is Jewish but does not necessarily practice Judaism as a religion: "An Israel(ite) even though he has sinned is still an Israel(ite)" (Tractate Sanhedrin 44a). More commonly the Talmud uses the term Bnei Yisrael, i.e. "Children of Israel", ("Israel" being the name of the third patriarch Jacob, father of the sons that would form the twelve tribes of Israel, which he was given and took after wrestling with an angel, see Genesis 32:28-29[1]) to refer to Jews. According to the Talmud then, there is no distinction between "religious Jews" and "secular Jews."

In modern Hebrew, the same word is still used to mean both Jews and Judeans ("of Judea"). In Arabic the terms are yahūdī (sg.), al-yahūd (pl.), and بَنُو اِسرَائِيل banū isrāʼīl. The Aramaic term is Y'hūdāi. 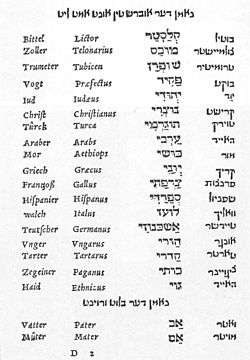 The Septuagint (reputedly a product of Hellenistic Jewish scholarship) and other Greek documents translated יְהוּדִי‎, Yehudi and the Aramaic Y'hūdāi using the Koine Greek term Ioudaios (Greek: Ἰουδαῖος; pl. Ἰουδαῖοι Ioudaioi), which had lost the 'h' sound. The Latin term, following the Greek version, is Iudaeus, and from these sources the term passed to other European languages. The Old French giu, earlier juieu, had elided (dropped) the letter "d" from the Latin Iudaeus. The Middle English word Jew derives from Old English where the word is attested as early as 1000 in various forms, such as Iudeas, Gyu, Giu, Iuu, Iuw, Iew. The Old English name is derived from Old French. The modern French the term is "juif".

Most European languages have retained the letter "d" in the word for Jew. Etymological equivalents are in use in other languages, e.g., "Jude" in German, "judeu" in Portuguese, "jøde" in Danish and Norwegian, "judío" in Spanish, "jood" in Dutch, etc. In some languages, derivations of the word "Hebrew" are also in use to describe a Jew, e.g., Ebreo in Italian, Ebri/Ebrani (Persian: عبری/عبرانی‎‎) in Persian and Еврей, Yevrey in Russian.[2] (See Jewish ethnonyms for a full overview.)

The German word "Jude" is pronounced [ˈjuːdə], the corresponding adjective "jüdisch" [ˈjyːdɪʃ] (Jewish), and is cognate with the Yiddish word for "Jew", "Yid".[3]

Further information: Who is a Jew?

Obverse of a Jewish silver Yehud coin from the Persian era, with falcon or eagle and Aramaic inscription "יהד" "Yehud" (Judaea)

In modern English, the term "Israelite" was used to refer to contemporary Jews as well as to Jews of antiquity until the mid-20th-century. Since the foundation of the State of Israel, it has become less common to use "Israelite" of Jews in general. Instead, citizens of the state of Israel, whether Jewish or not, are called "Israeli", while "Jew" is used as an ethno-religious designation.

The word Jew has been used often enough in a disparaging manner by antisemites that in the late 19th and early 20th centuries it was frequently avoided altogether, and the term Hebrew was substituted instead (e.g. Young Men's Hebrew Association). Even today some people are wary of its use, and prefer to use "Jewish". Indeed, when used as an adjective (e.g. "Jew lawyer") or verb (e.g. "to jew someone"),[4] the term Jew is purely pejorative. However, when used as a noun, "Jew" is preferred by Jews, as other circumlocutions (e.g. "Jewish person") give the impression that the term "Jew" is offensive in all contexts. Additionally, there is no other word that encapsulates this mixture of faith, tribe, race, nationality, and religion fully.

In much the same manner, the Yiddish term for Jew (איד,ייִד) Yid, (singular), ייִדן Yidn (plural)) — originally a benign term — was once used as an ethnic slur, but now is often used by Jews in praise, to describe an upstanding religiously observant Jew (e.g., "He's such a Yid, giving up his time like that") or to distinguish upstanding religiously observant Jews from non-observant, with the implication that the latter would be better people if they were stricter in their observance (e.g., "Yidn wouldn't do such a thing").

According to The American Heritage Dictionary of the English Language, Fourth Edition (2000):

It is widely recognized that the attributive use of the noun Jew, in phrases such as Jew lawyer or Jew ethics, is both vulgar and highly offensive. In such contexts Jewish is the only acceptable possibility. Some people, however, have become so wary of this construction that they have extended the stigma to any use of Jew as a noun, a practice that carries risks of its own. In a sentence such as There are now several Jews on the council, which is unobjectionable, the substitution of a circumlocution like Jewish people or persons of Jewish background may in itself cause offense for seeming to imply that Jew has a negative connotation when used as a noun.[5]