Frölunda Torg is a shopping centre in Gothenburg, Sweden. It is one of the largest shopping centres in Scandinavia, with approximately 200 shops and more than 10 million visitors in 2009. The shopping centre's total area is about 75,000 square metres. The companies housed in Frölunda Torg employ in total 1,500 people and their total annual turnover is in excess of 1.6 billion kronor.

At September 8, 1966 Frölunda Torg was inaugurated by Olof Palme as, at the time, Europe's largest shopping centre. The construction had cost SEK 80 million and took eight year to complete.

In 2007, the owner Diligenta, was granted building permit for a large renovation and expanding process. The renovation started on October 26, 2007 and the first stage was completed in 2010. The second stage was started in the spring of 2010 and is believed to be finished in 2011. At that time, the centre will be hosting a total of 200 stores in 75,000 m². 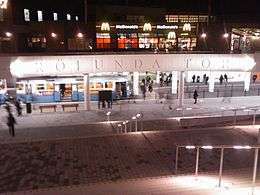 Frölunda Torg is located in west Gothenburg, in Frölunda. The shopping centre also offers parking space to 3000 cars in three parking lots and two parking-decks. Just outside there is a major bus-pit and a tram station with a tram arriving every three minutes. The tram station is accessed with tram lines 1, 7 and 8,[2] with a travel time from the inner city is about 20 minutes. This makes it easy to reach by public transportation, even if many of the visitors use car.

w:sv:Wikipedia:KML/Frölunda torg
KML is from Wikidata
This article is issued from Wikipedia - version of the 11/20/2016. The text is available under the Creative Commons Attribution/Share Alike but additional terms may apply for the media files.