Not to be confused with Gamla Ullevi.

Ullevi, sometimes known as Nya Ullevi (Swedish: [(ˈnyːa) ˈɵlːəviː], New Ullevi), is a multi-purpose stadium in Gothenburg, Sweden. It was built for the 1958 FIFA World Cup, but since then Ullevi has also hosted the World Allround Speed Skating Championships six times, the 1995 World Championships in Athletics and the 2006 European Athletics Championships, the UEFA Cup Winners' Cup finals in 1983 and 1990, the UEFA Euro 1992 final, the UEFA Cup final in 2004, and annually hosted the opening ceremony of the Gothia Cup—the world's largest football tournament in terms of the number of participants. IFK Göteborg has also played two UEFA Cup finals at the stadium, in 1982 and 1987, but then as home game in a home and away final. The stadium hosted several events, like football, ice hockey, boxing, racing, athletics and concerts.

The stadium is one of the biggest in the Nordic countries, with a seating capacity of 43,000 and a total capacity of 75,000 for concerts.

The ground opened for the 1958 FIFA World Cup held across Sweden. It hosted four matches in Group D, including a play-off.[1] It also held a quarter-final, a semi-final and the third-place match.

The stadium'srecord attendance, for football, is 52,194 and was set on 3 June 1959, when Örgryte IS played against IFK Göteborg.

It was also the venue for the first game between NFL teams to be played on the European continent, organised by Swedish motor company Volvo. In a pre-season game on 14 August 1988, the Minnesota Vikings won 28-21 against the Chicago Bears.[2]

The 1990 European Cup Winners' Cup Final was also held at the stadium. It saw Sampdoria of Italy defeat Anderlecht of Belgium 2-0 after extra-time.[3]

Ullevi held three Group B matches at UEFA Euro 1992[4] as well as a semi-final, and the final itself on 26 June in which Denmark won the trophy against Germany.

The 2004 UEFA Cup Final was held at the stadium on 19 May of that year. Valencia of Spain defeated Marseille of France 2-0.[5]

Ullevi nearly collapsed during a famous Bruce Springsteen concert on 8 June 1985, due to the rhythmic movement of tens of thousands of people in the audience and the clay soil on which the stadium is built. The concert also caused nearly £3 million in damages, while David Bowie's Glass Spider Tour in June 1987 was relocated from Ullevi to Eriksberg because of fears about the safety of the structure.[6] Since then, the concrete pillars supporting the stadium have been extended down to the bedrock. Springsteen has performed at the stadium on subsequent tours.

Elton John hosted a sell-out concert in 1998. It was part of the Face-To-Face Tour with Billy Joel, but Joel was unable to perform, due to illness. Elton John played for over three hours.

The "big four" of thrash metal (Slayer, Anthrax, Megadeth, and Metallica) played in the stadium on 3 July 2011.

Foo Fighters performed at the venue on 12 June 2015 on the Sonic Highways World Tour. However, Dave Grohl fell off stage during the second song of the concert, which led to him suffering a broken leg. Grohl was treated in the stadium before returning to the stage to continue the rest of the concert, albeit while sitting down in a chair while a medic applied a cast. Despite Grohl's injuries, the band was able to complete the concert.

Since March 2007, Ullevi has one of Sweden's largest solar power plants, consisting of 600m² of solar photovoltaic panels situated on the roof of the luxury boxes section. The top effect is 86.4 kW and the yield is supposed to cover the total power used by the artificial lighting used for events, with a surplus.[7]

Ullevi has also hosted Motorcycle speedway and hosted the Speedway World Championship on no less than eight occasions, second only to the old Wembley Stadium in London, England which hosted the World Final a record 26 times. The track is a dirt surface laid out over the athletics track and is officially 404 metres (442 yards) long with a track record of 69.4 seconds (4 laps clutch start).[8]

The first Championship World Final to be held at Ullevi was the inaugural Speedway World Team Cup competition in 1960. Led by reigning world champion Ove Fundin and his team mates Olle Nygren, Rune Sörmander and Björn Knutsson, Sweden swept to victory over England, Czechoslovakia and Poland. Ullevi would have wait 26 years before World Team Cup competition returned with the stadium hosting the first round of the three round 1986 Final.

The first ever Individual World Final staged at Ullevi was in 1964 when New Zealand's Barry Briggs won with a 15-point maximum. The largest attendance for a World Final at Ullevi occurred in 1974 when 38,390 turned out to see Sweden's own Anders Michanek win his only World Championship with an unbeaten 15 point maximum. No World Championship winners at Ullevi dropped more than one point in their five rides with five of the seven World Finals being won with a 15-point maximum. The stadium also hosted other qualifying rounds for the Individual World Final including the inaugural running of the Intercontinental Final in 1975 won by New Zealand legend Ivan Mauger.

* Ullevi hosted the first of 3 rounds in the Final. 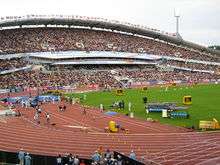 The east stand of Ullevi during the 2006 European Athletics Championships