The FDR Drive (officially referred to as the Franklin D. Roosevelt East River Drive, and sometimes known as the FDR) is a 9.44-mile (15.19 km) freeway-standard parkway on the east side of the New York City borough of Manhattan. It starts just north of the Battery Park Underpass at South and Broad Streets and runs along the entire length of the East River, from the Battery Park Underpass under Battery Park – north of which it is the South Street Viaduct – north to 125th Street / Robert F. Kennedy Bridge / Willis Avenue Bridge interchange, where it becomes the Harlem River Drive. All of the FDR Drive is designated New York State Route 907L (NY 907L), an unsigned reference route.

By law, the current weight limits on the FDR Drive from 23rd Street to the Harlem River Drive in both directions is posted 8,000 pounds (3,600 kg). Buses are not allowed to use the roadway north of 23rd Street, because of clearance and weight issues. All commercial vehicles (including trucks) are banned from all sections of the FDR Drive, except for a short section just north of the Battery Park Underpass where the northbound lanes temporarily merge with South Street.[3] The FDR Drive features a mix of below-grade, at-grade, and elevated sections, as well as three partially covered tunnels. 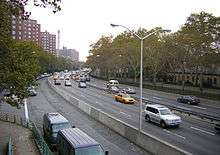 The first sections of this roadway, originally named the East River Drive, were constructed in 1934, having been designed by Robert Moses. It was later renamed after Franklin Delano Roosevelt and is usually called the "FDR Drive".[4] Moses faced the difficulties of building a parkway/boulevard combination along the East River while minimizing disruptions to residents.

The section from 125th Street to 92nd Street is the original 1934 construction, while sections from 92nd Street down to Battery Park (with the exception of a section from 42nd to 49th streets) were built as a boulevard, an arterial highway running at street level. Future reconstruction designs from 1948 to 1966 converted the FDR Drive into the full parkway that is in use today.[5] The section of highway from 23rd Street to 34th Street was built on wartime rubble dumped by cargo ships returning from Bristol, England, during World War II. The German Luftwaffe bombed Bristol heavily. After delivering war supplies to the British, the ships' crews loaded rubble onto the ships for ballast, then sailed back to New York, where construction crews made use of it.[6]

Exit 6, at 15th Street, is located near a Con Edison substation, which handles most of the electricity for lower Manhattan, and has been closed since the September 11, 2001 attacks. City and ConEd officials believed it was too risky to allow such easy access to such a critical piece of infrastructure, and there are no plans to reopen it.[7] All signage of exit 6 was removed in early 2016.[8]

The East River Greenway runs below, beside or above the motor road from South Street to 34th Street and 60th Street to 124th Street. A plaque dedicating the East River Drive is visible on the southbound roadway before entering the Gracie Mansion tunnel at 90th Street. 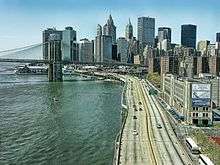 FDR Drive starts at the southern tip of Manhattan at South and Whitehall streets, and quickly becomes elevated until Gouverneur Slip, near the Manhattan Bridge interchange. This section is also known as the South Street Viaduct. From here, the road is at-grade, except for when it uses an underpass to dive below the Houston Street interchange.

On the southbound side, Exit 6, which served Alphabet City via East 15th Street, was temporarily closed after September 11, 2001, and was permanently removed in 2014 after the New York State Department of Transportation received notification from the New York City Police Department that the exit would not be re-opening for security reasons. The ramp passed through a ConEdison facility that was deemed a potential terrorist target.

Once past the 18th Street curve, it becomes elevated briefly until 25th Street in order to serve the 23rd Street interchange. After passing Waterside Plaza near 30th Street, the roadway again becomes elevated.

Here, the road emerges and proceeds at-grade to 51st Street, where the road enters the Sutton Place Tunnel, which passes under apartment buildings on the east side of Sutton Place and York Avenue until 60th Street; As part of the design in this area, numerous homes on the river were demolished and rebuilt or otherwise modified to accommodate the highway. In this unique tunnel, the southbound roadway is raised and runs over the northbound roadway for northbound access to and from the Queensboro Bridge interchange.[9]

From 63rd to 68th Street, the Drive forms the eastern boundary of Rockefeller University. Plans were approved in 2014 for the university to build a platform for a 160,000-square-foot (15,000 m2) building to be constructed over the Drive, using air rights the university owns.[10] This would create another at-grade tunnel, similar to the section roadway that runs underneath the pilotis of the New York-Presbyterian Hospital from 68th to 71st Streets. 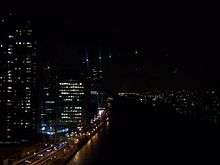 From 79th to 90th streets runs a final enclosed, at-grade portion; the southbound roadway is again raised over the northbound roadway in a short segment of the tunnel. The promenade of Carl Schurz Park was built over the highway in 1939, near Gracie Mansion.[11] Except for a short elevation over the 96th Street interchange, the remaining portion of the roadway from this tunnel to the 125th Street interchange is at grade.

The entire route is in the New York City borough of Manhattan (New York County).

Template:Attached KML/Franklin D. Roosevelt East River Drive
KML is from Wikidata
This article is issued from Wikipedia - version of the 11/3/2016. The text is available under the Creative Commons Attribution/Share Alike but additional terms may apply for the media files.