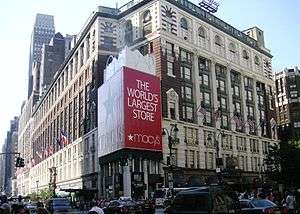 Between 7th Avenue and Broadway is Macy's, which advertises itself as the "world's largest department store."

In April 2010, the New York City Department of Transportation proposed to add bus rapid transit along the 34th Street corridor. To create exclusive lanes for buses, the street would be converted to one-way westbound operation west of Sixth Avenue and one-way eastbound operation east of Fifth Avenue; a pedestrian plaza would be created between Fifth and Sixth avenues.[2] The street was eventually kept in two-way operation.

The street was designated by the Commissioners' Plan of 1811 that established the Manhattan street grid as one of 15 east-west streets that would be 100 feet (30 m) in width (while other streets were designated as 60 feet (18 m) in width).[3]

At the west end of the street one finds the Hudson River, the West Midtown Ferry Terminal, the West 30th Street Heliport, the Hudson River Greenway, the West Side Highway, and the Jacob K. Javits Convention Center, New York City's main convention center. On the West Side, 34th Street is in the Hell's Kitchen neighborhood, at the north end of the West Side Yard. On Tenth Avenue is a McDonald's with a drive-thru and a small parking lot, a rarity in Manhattan. On Ninth is B&H Photo Video, a large retailer of photographic and electronic equipment.

Further east at Eighth and 33rd, the Post Office and Penn Station dominate on the south side of the street, serving Amtrak trains to destinations all over the United States and Canada, and Long Island Rail Road and New Jersey Transit trains to suburbs. Above Penn Station sits Madison Square Garden, which calls itself "the world's most famous arena". The grand stairs of the James Farley Post Office are built on the scale of the former Penn Station. The architecture of the post office gives a flavor of what the area was like in the height of the railroad era.

34th Street is a major shopping street. Though it endured a decline in the 1970s, it rebounded late in the 20th century with new stores and new energy. A giant video board and light display at 34th and Broadway is like a mini Times Square. Between Seventh Avenue and Broadway, one will find Macy's, the famous department store immortalized in the Christmas movie Miracle on 34th Street. It claims to be the "world's largest store." The annual Macy's Thanksgiving Day Parade ends on 34th Street. A block south of 34th, at Sixth Avenue and 33rd Street, is the Manhattan Mall, an indoor shopping mall built inside what had been the flagship location of the Gimbel's department store. Branches of large chain stores also operate between 8th and 5th Avenues.

East of Herald Square and the hectic shopping district, the influence of the East Side and the sedate corporate office towers of the neighborhoods Kips Bay and Murray Hill starts to take hold. On Fifth Avenue one finds the Empire State Building. The second tallest building in the city, it stands on a rare ledge of solid Manhattan schist dominating the skyline. Slightly north, at 38th Street and 5th Avenue is Lord & Taylor; the oldest department store in the United States.

At the far end one finds bulky luxury residential buildings and a great number of dogs patronizing the pet care parlors that serve the pure-bred loving populations of Kips Bay, which is the name of both the neighborhood and its eponymous bend in the East River where 34th Street ends. At the riverbank are the FDR Drive, the East River Greenway for bicycling to the south end of Manhattan, a small parking lot for New York University, the East 34th Street Ferry Landing (NY Waterway, SeaStreak), and the East 34th Street Heliport.

The New York Post listed one part of the street – the block of between Sixth and Seventh Avenues – as one of "the most dangerous blocks in the city" because police crime statistics for 2015 showed that 44 burglaries and 244 grand larcenies had been reported there, more property theft than for any other city block.[4] 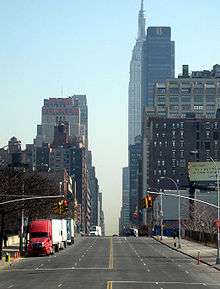 From the west end of 34th Street, looking east

Places located along or within one block of 34th Street include (from west to east):

Pennsylvania Station is located on 33rd Street, one block south, between Seventh and Eighth Avenues.