Frederick I of Sweden 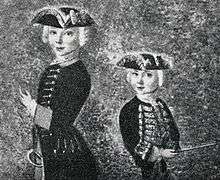 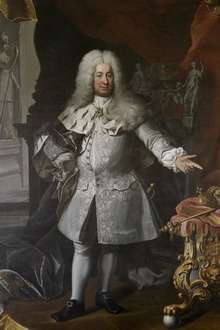 Frederick I of Sweden

Frederick I, Swedish: Fredrik I, (28 April 1676 – 5 April 1751) was prince consort of Sweden from 1718 to 1720, and King of Sweden from 1720 until his death and (as Frederick I) also Landgrave of Hesse-Kassel from 1730. He ascended the throne following the death of his brother-in-law, absolutist Charles XII in the Great Northern War, as his sister and heir Ulrika Eleonora preferred to abdicate from her position as queen regnant after relinquishing most powers to the Riksdag of the Estates. His powerless reign saw his family's elimination from the line of succession after the parliamentary government dominated by pro-revanchist Hat Party politicians ventured into a war with Russia, which ended in defeat and the Russian tsarina Elizabeth demanding Adolph Frederick of Holstein-Gottorp to be instated following the death of the king.

He was the son of Charles I, Landgrave of Hesse-Kassel, and Princess Maria Amalia of Courland. In 1692 the young prince made his Grand Tour to the Dutch Republic, in 1695 to the Italian Peninsula and later he studied in Geneva. After this he had a military career, leading the Hessian troops as Lieutenant General in the War of Spanish Succession on the side of the Dutch. He was defeated in 1703 in the Battle of Speyerbach, but participated the next year in the great victory in the Battle of Blenheim. In 1706 he was again defeated by the French in the Battle of Castiglione. Both in 1716 and 1718 he joined the campaign of Charles XII of Sweden against Norway, and was appointed Swedish Generalissimus.

Prince consort and King of Sweden

He married his second wife, Princess Ulrika Eleonora of Sweden, in 1715. He was then granted the title Prince of Sweden, with the style Royal Highness by the estates, and was prince consort there[1] during Ulrika Eleonora's rule as queen regnant from 1718 until her abdication in 1720. Frederick then succeeded her on the throne, elected by the Swedish Estates. He was the only Swedish prince consort there had been to date.

Frederick I had much influence during the reign of his spouse, and was a very active and dynamic king at the beginning of his 31-year reign. But after the aristocracy had regained power during the wars with Russia, he became not so much powerless as uninterested in affairs of state. In 1723, he tried to strengthen royal authority, but after he failed, he never had much to do with politics. He did not even sign official documents; instead a stamp of his signature was used. He devoted most of his time to hunting and love affairs. His marriage to Queen Ulrika Eleonora was childless, but he had several children by his mistress, Hedvig Taube.[2]

Some historians have suggested that the stray bullet which killed his brother-in-law Charles XII of Sweden in 1718 was actually fired by Frederick's aide. Charles had been an authoritarian and demanding ruler; one reason the Swedish Estates elected Frederick was because he was taken to be fairly weak, which indeed he turned out to be.

The defeats suffered by Charles XII in the Great Northern War ended Sweden's position as a first-rank European power. Under Frederick, this had to be accepted. Sweden also had to cede Estonia, Ingria and Livonia to Russia in the Treaty of Nystad, in 1721.

In 1723 Frederick rewarded the military inventor Sven Åderman with the estate of Halltorps on the island of Öland, for improving the rate of fire of the musket.

As a king, he was not very respected. When he was crowned, it was said; "King Charles we recently buried, King Frederick we crown – suddenly the clock has now passed from twelve to one". It is said about him, that although a lot of great achievements in the country's development happened during his reign, he never had anything to do with them himself. When he died, Carl Gustaf Tessin said about him:

Under the reign of King Frederick, science has developed – he never bothered to read a book. The merchant business has flourished – he has never encouraged it with a single coin. The Stockholm Palace has been built – he has never been curious enough to look at it.

Neither did he have anything to do with the founding of the first Swedish speaking theater at Bollhuset during his reign. One of his few important policies was the banning of duels.

On 23 February 1748 Frederick I instituted the three Swedish royal orders of the Seraphim, of the Sword and of the North Star, the three principal Swedish orders of chivalry.

Frederick became Landgrave of Hesse only in 1730, ten years after becoming King of Sweden. He immediately appointed his younger brother William governor of Hesse.

As Landgrave, Frederick is generally not seen as a success. Indeed, he did concentrate more on Sweden, and due to his negotiated, compromise-like ascension to the throne there, he and his court had a very low income. The money for that very expensive court, then, since the 1730s came from wealthy Hesse, and this means that Frederick essentially behaved like an absentee landlord and drained Hessian resources to finance life in Sweden. Also, Frederick's father, Charles I of Hesse-Kassel, had been the state's most successful ruler, rebuilding the state over his decades-long rule by means of economic and infrastructure measures and state reform, as well as tolerance, such as attracting, for economic purposes, the French Huguenots. His brother the governor, who would succeed Frederick as Landgrave William VIII of Hesse-Kassel, though by background a distinguished soldier, was likewise a great success locally. There are very few physical remainders of Frederick in Hesse today; one of them is his large Royal Swedish paraph (FR) over the old door of the University of Marburg's former riding hall, now the Institute of Physical Education.

Through Euphemia of Sweden, one of King Frederick's ancestors was King Magnus III.

Frederick I had three extramarital children with his mistress Hedvig Taube:

After the death of Hedvig Taube, his official mistress was the noblewoman Catharina Ebba Horn, whom he gave the title and recognition of German-Roman Countess (1745–1748).

Thus, the Hessian line in Sweden ended with him and was followed by that of Holstein-Gottorp. In Hesse-Kassel, he was succeeded by his younger brother William VIII, a famous general.