Adolf Frederick or Adolph Frederick (Swedish: Adolf Fredrik, German: Adolf Friedrich; 14 May 1710 – 12 February 1771) was King of Sweden from 1751 until his death. He was the son of Christian August of Holstein-Gottorp, Prince of Eutin, and Albertina Frederica of Baden-Durlach.

The first king from the House of Holstein-Gottorp, Adolf Frederick was a weak monarch, instated as first in line of the throne following the parliamentary government's failure to reconquer the Baltic provinces in 1741–43. Aside from a few attempts, supported by pro-absolutist factions among the nobility, to reclaim the absolute monarchy held by former monarchs, he remained a mere constitutional figurehead until his death, by popular belief attributed to a heavy consumption of semlas. His reign saw an extended period of internal peace, although the finances stagnated following failed mercantilist doctrines pursued by the Hat administration. The Hat administration ended only in the 1765–66 parliament, where the Cap opposition overtook the government and enacted reforms towards greater economic liberalism as well as a Freedom of Press Act almost unique at the time for its curtailing of all censorship, retaining punitive measures only for libeling the monarch or the Lutheran state church.

His father was Christian Augustus (1673–1726) duke and a younger prince of Schleswig-Holstein-Gottorp, prince-bishop of Lübeck, and administrator, during the Great Northern War, of the duchies of Holstein-Gottorp for his relative Charles Frederick. His mother was Albertina Frederica of Baden-Durlach.[1] 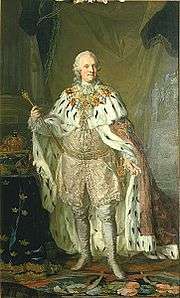 Adolf Frederick in old age as King, by Lorens Pasch the Younger

From 1727 to 1750 prince Adolf Frederick was prince-bishop of Lübeck, which meant the rulership of a fief around and including Eutin. After his first cousin Charles Frederick, Duke of Holstein-Gottorp died in 1739, Adolf Fredrik became administrator of Holstein-Kiel during the minority of the duke's orphan son, then known as Charles Peter Ulrich. Shortly afterwards, the young boy was invited to Russia by his maternal aunt, Empress Elizabeth, who soon declared him her heir; he later became known as Peter III of Russia.

In 1743, Adolf Fredrik was elected heir to the throne of Sweden by the Hat faction in order that they might obtain better conditions at the Peace of Turku from Empress Elizabeth of Russia,[1] who had adopted his nephew as her heir. He succeeded as King Adolf Fredrik twelve years later, on 25 March 1751.

During his twenty-year reign, Adolf Frederick was little more than a figurehead, the real power being lodged in the hands of the Riksdag of the Estates, often distracted by party strife. Twice he endeavoured to free himself from the tutelage of the estates. The first occasion was in 1756 when, stimulated by his imperious consort Louisa Ulrika of Prussia (sister of Frederick the Great), he tried to regain a portion of the attenuated prerogative through the Coup of 1756, and nearly lost his throne in consequence. On the second occasion during the December Crisis (1768), under the guidance of his eldest son, the crown prince Gustav, afterwards Gustav III of Sweden, he succeeded in overthrowing the "Cap" senate, but was unable to make any use of his victory.[1]

His mother died a widow in Hamburg on 22 December 1755. She was a descendant of earlier royal dynasties of Sweden, granddaughter of Christina Magdalena of Palatinate, Charles X's sister.

Adolf Frederick died in Stockholm on 12 February 1771 after having consumed a meal consisting of lobster, caviar, sauerkraut, kippers and champagne, which was topped off with 14 servings of his favourite dessert: semla stuffed with almond paste and served in a bowl of hot cream.[2]

The king was regarded, both during his time and in later times, as dependent on others, a weak ruler and lacking of any talents. But he was allegedly also a good husband, a caring father, and a gentle master to his servants. His favourite pastime was to make snuffboxes, which he allegedly spent a great deal of time doing. His personal hospitality and friendliness were witnessed by many who deeply mourned him at his death.

His portrait is included with the 16-sheet series of Princely Persons on Horseback by Johann Elias Ridinger.

By his marriage to Princess Louisa Ulrika of Prussia (which took place on 18 August/29 August 1744 in Drottningholm), he had the following children:

With Marguerite Morel he had one son who died as a child:

Adolf Frederick may have been the father of Lolotte Forssberg by Ulla von Liewen, but this has however never been confirmed.[4]