Sten Sture the Younger (Swedish: Sten Sture den yngre), Lord of Ekesiö (1493 – 3 February 1520), was a Swedish statesman and regent of Sweden, during the era of the Kalmar Union.

He was born in 1493, as the son of regent Svante Nilsson, a descendant of the Sture of Ekesiö family, and Iliana Gisladotter Gädda, heiress of Ulvåsa.

At the death of his father, the regent Svante, young Sten was only 18 years old. High Councillor Eric Trolle was chosen as regent by the council—he supported union with Denmark. However, young Sten utilized the castles and troops fiefed to him by his late father and made a coup. After Sten promised to continue union negotiations with Denmark, the High Council accepted him as regent instead of Trolle.

In reality, lord Sten's purpose was to keep Sweden independent of Denmark. He took the Sture name, heritage from his great-grandmother, because it symbolized independence of Sweden as reminder of Sten Sture the Elder, his father's third cousin.

Regent Sten knew that sooner or later, a war with Hans of Denmark (died 1513) and his son and successor Christian II would be inevitable. Therefore, he in 1513 agreed to a truce with Russia.

Finally, Christian II started an invasion of Sweden. Regent Sten was mortally wounded at the battle of Bogesund on 19 January 1520, in the last part of Christian II of Denmark's war against Sweden, and died on the ice of lake Mälaren on his way back to Stockholm. 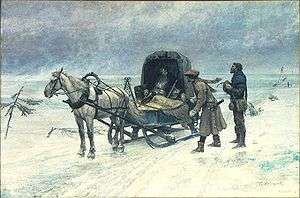 The Death of Sten Sture the Younger on the ice of lake Mälaren.Painting by Carl Gustaf Hellqvist (1880).

Christian II was enthroned in Sweden and archbishop Gustav had his revenge against supporters of Sture and against those who deposed the archbishop: he listed those enemies and accusations against them, dubbing them as heretics. King Christian had those accused executed at the Stockholm bloodbath in late 1520, including Sten Sture's corpse which was desecrated as a heretic's (burnt at the stake).