For other ships with the same name, see French ship Méduse.

For the famous painting by Géricault, see The Raft of the Medusa

Méduse was a 40-gun Pallas-class frigate of the French Navy, launched in 1810. She took part in the Napoleonic Wars, namely in the late stages of the Mauritius campaign of 1809–1811 and in raids in the Caribbean.

After the Bourbon Restoration, she was armed en flûte to ferry French officials to Saint-Louis, in Senegal, for the reestablishing of the colony after the British handover. Through inept navigation of her captain, an émigré given command for political reasons but incompetent as a naval officer, Méduse struck the Bank of Arguin and became a total loss. The 400 people on board had to evacuate, with 151 men on an improvised raft towed by the frigate's launches. When the launches gave up and left the raft behind, a terrible ordeal developed. Dozens were washed into the sea by a storm, others, drunk from wine, rebelled and were killed by officers. The survivors engaged in cannibalism. When supplies ran low, several injured men were thrown into the sea. After 13 days on sea, the raft was found with only 15 men surviving.[1]

The scenes on the raft instilled considerable public emotion, making Méduse one of the most infamous shipwrecks of the Age of Sail. Two survivors, a surgeon and an officer, wrote a widely read book about the case. The case was immortalised when Théodore Géricault painted his Raft of the Medusa, which became an icon of French Romanticism.

Méduse was commissioned in Nantes on 26 September 1810.

In 1811, she was sent off to Java with Nymphe, in a frigate division under Joseph-François Raoul. On 2 September, the frigates arrived at Surabaya, tailed by the 32-gun frigate HMS Bucephalus. On the 4th, another British ship, HMS Barracouta, joined the chase, but lost contact on the 8th. On the 12th, Méduse and Nymphe chased Bucephalus, which escaped and broke contact the next day. Méduse was back in Brest on 22 December 1811. She then served in the Atlantic, and in 1814, she was part of the fleet sent to retake Guadeloupe.

At the Bourbon restoration, Louis XVIII decided to get the Navy back under Royalists. Consequently, Viscount Hugues Duroy de Chaumareys was appointed Capitaine de frégate even though he had hardly sailed in 20 years.[2]

Line-crossing ceremony aboard Méduse on the first of July 1816.

On 17 June 1816, a convoy under the command of Chaumareys on Méduse departed Rochefort, accompanied by the storeship Loire, the brig Argus and the corvette Écho, to receive the British handover of the port of Saint-Louis in Senegal. Méduse, armed en flûte, carried passengers, including the appointed French governor of Senegal, Colonel Julien-Désiré Schmaltz, and his wife Reine Schmaltz. Méduse's complement totaled 400, including 160 crew. She reached Madeira on 27 June.

Schmaltz then wanted to reach Saint-Louis as fast as possible, by the most direct route, but this would take the fleet dangerously close to the shore, where there were many sandbars and reefs. Experienced crews sailed further out. Méduse was the fastest of the convoy and, disregarding his orders, the captain quickly lost contact with Loire and Argus. Écho kept pace and attempted to guide Méduse, but to no avail. Écho then prudently moved further out to sea.

Chaumareys had decided to involve one of the passengers, Richefort, in the navigation of the frigate. Richefort was a philosopher and a member of the Philanthropic Society of Cape Verde, but had no qualification to guide ships.[3] As she closed on the coast of Africa, the course of Méduse became dangerous. Richefort apparently mistook a large cloud bank on the horizon for Cape Blanco on the African coast, and so underestimated the proximity of the Bank of Arguin off the coast of Mauritania.[4]

On 2 July 1816 Méduse ran into increasingly shallow water, both Chaumareys and Richefort ignoring signs such as white breakers and mud in the water. Eventually, Lieutenant Maudet took it upon himself to start taking soundings off the bow, and, measuring only 18 fathoms (ca. 32 metres), warned his captain. Realising the danger at last, Chaumareys ordered the ship brought up into the wind, but it was too late, and Méduse ran aground 50 kilometres off the coast.[5] The accident occurred at a spring high tide, which made it difficult to re-float the frigate. The captain refused to jettison the 14 three-tonne cannons and so the ship settled into the bank. 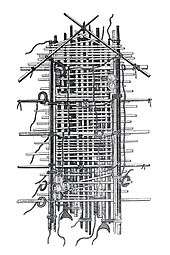 Plan of the Raft of the Medusa at the moment of its abandonment. 150 Frenchmen were placed on this raft; only 15 were saved 13 days later. Frontispiece to Alexandre Corréard and Jean-Baptiste Henri Savigny Naufrage de la fregate Méduse, Paris 1818, Biblioththeque Nationale.,[6] by Alexandre Corréard.

Plans were proposed to use the ship's launches to ferry the passengers and crew to the shore, about 30 miles away, which would have taken two boat trips. Numerous ideas for lightening Méduse and immediately coming off the reef were proposed, in particular, that of building a raft to unload Méduse's cargo.[7] A raft was soon built; it was 20 metres in length and 7 metres in width, and was nicknamed "la Machine" by the crew.[7] On 5 July, a gale developed and Méduse showed signs of breaking up. Passengers and crew panicked and so the captain decided to evacuate the frigate immediately, with 146 men and one woman boarding the woefully unstable raft, towed by the boats of Méduse. The raft had few supplies and no means of steering or navigation. Much of its deck was under water. Seventeen men decided to stay on Méduse, and the rest boarded the ship's longboats.[8] The crew of the boats soon realised that towing the raft was impractical and began to fear being overwhelmed by the desperate survivors on the raft. It was decided to cut the ropes, leaving the raft and its occupants to their fate.[9] The lifeboats, including the captain and Governor Schmaltz aboard, then sailed away to safety. Some landed immediately on the coast of Africa, most of the survivors making their way overland to Senegal though some died on the way.

On the raft, the situation deteriorated rapidly. Among the provisions were casks of wine instead of water. Fights broke out between the officers and passengers on one hand, and the sailors and soldiers on the other. On the first night adrift, 20 men were killed or committed suicide. Stormy weather threatened, and only the centre of the raft was secure. Dozens died either in fighting to get to the centre, or because they were washed overboard by the waves. Rations dwindled rapidly; by the fourth day there were only 67 left alive on the raft, and some resorted to cannibalism. On the eighth day, the fittest [10] decided to throw the weak and wounded overboard leaving fifteen men, all of whom survived the four remaining days until their rescue on 17 July by Argus, which had accidentally encountered them.[11][12]

Argus took the survivors of the raft to Saint-Louis to recover. Five of them, including Jean Charles, the last African crew member, died within days. Chaumareys decided to rescue the gold that was still on board Méduse and sent out a salvage crew, which discovered that Méduse was still intact. Three of the 17 men who had decided to stay on the Méduse were still alive 54 days later. British naval officers helped the survivors to return to France because aid from the French Minister of the Marine was not forthcoming.

Méduse's surviving surgeon, Henri Savigny, submitted his account to the authorities. It was leaked to an anti-Bourbon newspaper, the Journal des débats, and appeared on 13 September 1816. Savigny and another survivor, the geographer Alexandre Corréard, then wrote a book with their own account (Naufrage de la frégate la Méduse) of the incident, published in 1817. It went through five editions by 1821 and was also published with success in English, German, Dutch and Italian translations. A revision of the text in later editions increased the political thrust of the work.[13]

The matter became a scandal in French politics and officials tried to cover it up. At his court martial at Port de Rochefort in 1817 Chaumareys was tried on five counts but acquitted of abandoning his squadron, of failing to re-float his ship and of abandoning the raft. However he was found guilty of incompetent and complacent navigation and of abandoning the Méduse before all her passengers had been taken off. Even though this verdict exposed him to the death penalty, Chaumareys was sentenced to only three years in jail.

The court martial was widely thought to be a "whitewash" and in 1818 Senegal Governor Schmaltz was forced to resign. The Gouvion de Saint-Cyr Law later ensured that promotions in the French military would thereafter be based on merit. 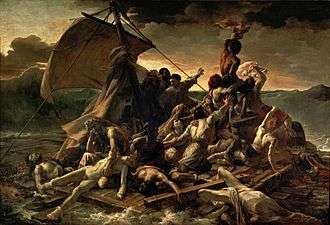 Impressed by accounts of the shipwreck, the 25-year-old artist Théodore Géricault decided to create a painting based on the incident and contacted the writers in 1818. His work depicts a moment recounted by one of the survivors: prior to their rescue, the passengers saw a ship on the horizon, which they tried to signal. She disappeared, and in the words of one of the surviving crew members, "From the delirium of joy, we fell into profound despondency and grief".[14] The ship, Argus, reappeared two hours later and rescued those who remained.

The painting titled The Raft of the Medusa is considered an icon of French Romanticism and is on display in the Louvre.

In 1980, a French marine archaeological expedition led by Jean-Yves Blot located Méduse shipwreck site off the coast of modern-day Mauritania. The team operated out of the port city of Nouadhibou, approximately 160 kilometres north of the wreck site and used four sailboats as the expedition working vessels. The primary search tool was a one-of-a-kind magnetometer developed by the CEA.

The search area was defined on the basis of the accounts of survivors of Méduse and, more importantly, on the records of an 1817 French coastal mapping expedition that found the vessel's remains still projecting above the waves. The background research proved to be so good that the expedition team located the shipwreck site on the very first day of searching. They then recovered enough artifacts to identify the wreck positively and to mount an exhibit in the Marine Museum in Paris.[15]

Other portrayals in popular culture

The rock group Great White used this painting as the cover art for their album Sail Away.

The second album by Irish folk-rock group The Pogues, Rum, Sodomy, and the Lash, uses the famous painting as its album cover, with the faces of the band members replacing those of the men on the raft. Also, on their album Hell's Ditch they pay tribute to the incident with the song "The Wake of the Medusa".

The layout of the scene is copied in the French comic book Astérix Légionnaire (Goscinny/Uderzo, 1967) to depict yet another shipwreck of Astérix's recurring pirate enemies. The captain's comment is the pun, "Je suis médusé" ("I am dumbfounded"). Anthea Bell and Derek Hockridge in their English translation replaced this pun with a different joke specifically relating to the painting, having the captain say, "We've been framed, by Jericho!"[16]

In The Adventures of Tintin comic The Red Sea Sharks, while the protagonists are escaping on a raft, a wave washes Captain Haddock off. He climbs back on with a jellyfish on his head. Tintin asks him: "Do you think this is some raft of Méduse?" (Méduse is the French word for "jellyfish".)

French songwriter and poet Georges Brassens alludes to the raft of Méduse in his song "Les copains d'abord" (1964). The song is a hymn to friendship, symbolised by the crew of a ship named "Les Copains d'Abord" (Friends first), and in the first verse it says that she was not "the raft of Méduse".

Dr. Lecter's mind wanders to Géricault's anatomical studies for The Raft of the Medusa while waiting for Senator Martin to focus on their conversation in the novel The Silence of the Lambs.