Aftercastle of the frigate Méduse, as seen from the deck

Galleon showing both a forecastle (left) and aftercastle (right) 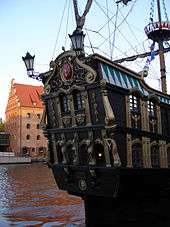 An aftercastle (or sterncastle, sometimes aftcastle) is the stern structure behind the mizzenmast and above the transom on large sailing ships, such as carracks, caravels, galleons and galleasses. It usually houses the captain's cabin and perhaps additional cabins, and is crowned by the poop deck, which on man-of-wars provided a heightened platform from which to fire upon other ships; it was also a place of defense in the event of boarding. More common, but much smaller, is the forecastle.

As sailing ships evolved, the aftercastle gave way to the quarterdeck, whose span ran all the way to the main mast.

This article is issued from Wikipedia - version of the 9/24/2015. The text is available under the Creative Commons Attribution/Share Alike but additional terms may apply for the media files.