A full breakfast is a breakfast meal, usually including bacon, sausages, eggs, and a variety of other cooked foods, with a beverage such as coffee or tea which originated in England, United Kingdom. It is especially popular in the UK and Ireland, to the extent that many cafés and pubs offer the meal at any time of day as an "all-day breakfast". It is also popular in other English-speaking countries, particularly countries that were a part of the British Empire. A long established meal in British culture, just under a fifth of British travellers eat a full English breakfast while on holiday overseas.[1]

In England it is usually referred to as a 'full English breakfast' (often shortened to 'full English') or 'fry-up'.[2][3] Other regional names and variants include the 'full Scottish', 'full Welsh', 'full Irish' and the 'Ulster fry'.[4][5][6]

The full breakfast is among the most internationally recognised British dishes, along with such staples as bangers & mash, shepherd's pie, fish and chips, roast beef, Sunday roast and the Christmas dinner.[7] The full breakfast became popular in the British Isles during the Victorian era, and appeared as one among many suggested breakfasts in the home economist Isabella Beeton's The Book of Household Management (1861). A full breakfast is often contrasted (e.g. on hotel menus) with the lighter alternative of a Continental breakfast, traditionally consisting of tea, milk or coffee and fruit juices with bread, croissants, or pastries.

The ingredients of a full breakfast vary according to region and taste. They are often served with condiments such as brown sauce or ketchup. 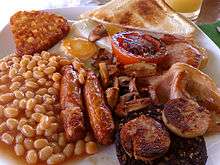 As nearly everything is fried in this meal, it is commonly called a "fry-up". As some of the items are optional, the phrase 'full English breakfast', 'full English' (or 'Full Monty') often specifically denotes a breakfast including everything on offer. The latter name became popular post World War II after British Army general Bernard Montgomery (nicknamed Monty) was said to have started every day with the full works when in the campaign in North Africa.[14]

In Ireland, as elsewhere, the exact constituents of a full breakfast vary, depending on geographical area, personal taste and cultural affiliation. The breakfast became popular there whilst Ireland was a part of the United Kingdom. Traditionally, the most common ingredients in Ireland are bacon rashers, pork sausages, fried eggs (or scrambled), white pudding, black pudding, toast and fried tomato.[15] Sauteed field mushrooms are also sometimes included,[16] as well as baked beans, hash browns, liver, and brown soda bread.[17][18][19] Fried potato farl, boxty or toast is sometimes served as an alternative to brown soda bread.

The "breakfast roll",[20] consisting of elements of the full breakfast served in a French roll, has become popular due to the fact it can be easily eaten on the way to school or work, similar to the breakfast burrito in the United States.[20] The breakfast roll is available from many petrol stations and convenience stores throughout Ireland.[20] In 2006 Irish comedian Pat Shortt released a song called "Jumbo Breakfast Roll". 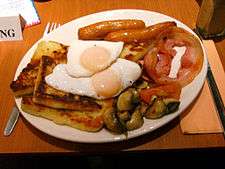 An Ulster fry is a dish similar to the English breakfast, and is popular throughout Ulster, where it is eaten not only at breakfast time but throughout the day. Typically it will include soda bread and potato bread as in an Irish breakfast, but omitting the white pudding.

Similarly to the breakfast roll seen in the south of Ireland, in the north they serve "filled sodas", which usually consist of a soda farl shallow-fried on one side and filled with fried sausages, bacon and eggs. Fried onions or mushrooms are usually added upon request. Filled sodas are a popular choice for breakfast from roadside fast-food vendors. 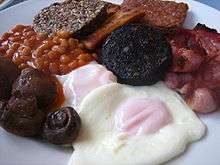 In Scotland, the full breakfast, as with others, contains eggs, back bacon, link sausage, buttered toast, baked beans, and tea or coffee. Distinctively Scottish elements include Scottish style black pudding, Lorne sausage, and tattie scones. It commonly also includes fried or grilled tomato and/or mushrooms and occasionally haggis, white pudding, fruit pudding[21] or oatcakes.[22][23] As with other breakfasts it has become more common, especially within the home, to grill the meats, puddings and tomatoes and to only fry the eggs and tattie scones. Another more historical Scottish breakfast is porridge and may occasionally be served as a starter.

Brewer's Dictionary of Phrase and Fable refers to a Scotch breakfast as "a substantial breakfast of sundry sorts of good things to eat and drink".[24]

As in the rest of Britain and Ireland, the composition of a Full Welsh Breakfast (Welsh: Brecwast Cymreig llawn) can vary. However, with the new-found appreciation of Welsh food and recipes, there have been attempts to establish a broad definition.[25]

Modern alternatives to the traditional full breakfast will often develop the traditional seafood theme. Smoked fish such as Sea Trout or Sewin may be served accompanied with poached eggs.[25] 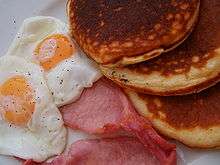 Bacon and eggs with pancakes

The style of breakfast has carried over to the United States and Canada. In America it was brought over from the UK when the American Colonies were created, and in Canada because it was a part of the British Empire. Full breakfast in these countries often consists of eggs, various meats, and very commonly fried potatoes such as hash browns, home fries, Potatoes O'Brien, potato pancakes, and some form of bread. Typical breakfast meats include bacon, Canadian bacon, breakfast sausage, ham, scrapple, pork roll, Spam, steak, or country fried steak; in Canada, peameal bacon or cretons are often served. In the Southern US, grits are typically included. Breads served might include toasted bread, English muffins, bagels, or biscuits. Beverages such as coffee and orange juice may be included, and pancakes, waffles, or French toast might accompany the other items. In areas with high Irish populations, such as New York on the East Coast of America, the full English breakfast is more commonly known as an Irish breakfast, due to Irish immigration from the UK during the potato famine.

The full breakfast common in Australia is similar to British and North American variants, with some differences, having spread to Australia when it was a part of the British Empire.

Bacon, eggs, and sausages are the most common aspects of the Australian full breakfast. Tomato, barbecue and Worcestershire sauces are used frequently, as is cheese. Hash browns, potato fritters and baked beans are common accompaniments. Bread is used as the base for most breakfast dishes, however it is common to use bread (or toast) to make a bacon and egg sandwich. Breakfast muffins are an increasingly popular alternative to bread in the Australian full breakfast.

Some of the foods that may be included in a full breakfast are: