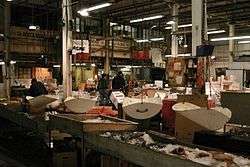 The interior of the Fulton Fish Market

The Fulton Fish Market is a fish market in Hunts Point, a section of the New York City borough of the Bronx, in New York, United States. It was originally a wing of the Fulton Market, established in 1822 to sell a variety of foodstuffs and produce. In November 2005, the Fish Market relocated to a new facility in Hunts Point in the Bronx, from its historic location near the Brooklyn Bridge along the East River waterfront at and above Fulton Street in the Financial District, Lower Manhattan.

During much of its 193-year tenure at the original site, the Fulton Fish Market was the most important wholesale East Coast fish market in the United States. Opened in 1822, it was the destination of fishing boats from across the Atlantic Ocean. By the 1950s, most of the Market's fish were trucked in rather than offloaded from the docks. The wholesalers at the Market then sold it to restaurateurs and retailers who purchased fresh fish of every imaginable variety.[1] It was possible for fish to be rushed from fishing ports in New England to wholesale buyers at the Fulton Fish Market, who might then resell it to retail markets and restaurants in the very same towns where the catch originated.

Prices at the Fulton Fish Market were tracked and reported by the United States government. In its original location, it was one of the last, and most significant, of the great wholesale food markets of New York. It survived major fires in 1835, 1845, 1918, and 1995. In its new location in the Hunts Point Cooperative Market, it handles millions of pounds of seafood daily, with annual sales exceeding one billion dollars, and is second in size worldwide after Tokyo’s Tsukiji fish market.[2] 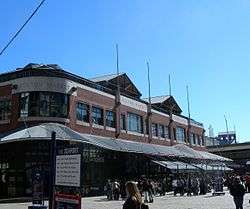 The Fulton Fish Market was one of New York's earliest open-air fish markets. From a New York newspaper dated 1831:

In New York, there are a number of Markets. Those called Fulton and Washington Markets are the largest. Fulton Market is at the East end of Fulton Street near the East River...The first was formerly situated in Maiden Lane on the East River side, and was called Fly Market.

The Fulton Fish Market is one of the oldest fish markets in the United States, in competition with the smaller Maine Avenue Fish Market in Washington, D.C. The Fulton Market was claimed to be the oldest in continuous operation in one place (since 1822) until it was relocated in 2005. The Maine Avenue Market in D.C. (since 1805, in various incarnations) is now considered the oldest continuously operating open-air market that still survives on the East Coast. However, the Fulton Fish Market is the oldest institution that still retains a primarily wholesale function; although its original public market on South Street is now closed.

During most of the 20th century the market was associated with one or more New York Mafia families. In 1988, the U.S. Attorney's Office filed a suit under federal racketeering laws to appoint a trustee to run the market.[3] A trustee was appointed, but the extent to which he was able to limit organized crime influence was limited.[4] Since 2001, the market has been regulated by the City of New York's Business Integrity Commission in an effort to eliminate organized crime influence.[5]

On November 14, 2005, nearly 4 years after construction on the $85 million facility began, the Market opened at its Bronx location. The move had been delayed due to legal problems.[6] The last-minute dispute was between a company which had had a ten-year monopoly on delivering fish from trucks to individual sellers' stalls, versus the cooperative of sellers who wanted to do the task themselves in the new building. When the feuding parties agreed to continue as they had been for another three years, the last obstacle to the move was removed and packing began.[7]

The move brought 650 workers from the market's former location into the Bronx,[13] with an additional 5500 diesel truck trips through Hunts Point per week (according to the NY Metropolitan Transportation Council[14] – bringing the weekly total to 60,000.[15] The facility generates over $1 billion in yearly revenue, and allows seafood distributors to store their goods in temperature controlled warehouses with easier transportation access due to its proximity to the Bruckner Expressway. The 400,000-square-foot (37,000 m2) facility has better access to major highways in Hunts Point, but doesn't utilize the nearby LaGuardia Airport in Queens.[16]