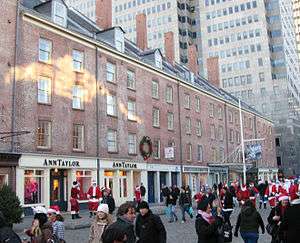 Fulton Street on a December afternoon

Fulton Street is a busy street located in Lower Manhattan in New York City. Located in the Financial District, a few blocks north of Wall Street, it runs from Church Street at the site of the World Trade Center to South Street, terminating in front of the South Street Seaport. The easternmost block is a pedestrian street. After the World Trade Center construction is completed, it will extend further toward the Hudson River to West Street.

The street has a Beaux-Arts architectural feel with many buildings dating back to the Gilded Age or shortly thereafter. The early 19th-century buildings on the south side of the easternmost block are called Schermerhorn Row and are a Registered Historic Place.

Regular cricket matches were held near the present Fulton Market in 1780 when the British Army-based itself in Manhattan during the American Revolution.[1]

Fulton Street is named for Robert Fulton, an engineer who became famous for his steamship in 1809.[2] East River ferries connected this street to Fulton Street in Brooklyn, at Brooklyn Ferry at the time, Fulton Street, counting the ferry, was one continuous street from Manhattan to Brooklyn, beginning in Manhattan, traveling across the ferry, and along what is today Old Fulton Street, Cadman Plaza West, and what is now a pedestrian esplanade on the east side of the Brooklyn Borough Hall.

The Fulton Fish Market was located nearby at the South Street Seaport until 2005, when it moved to Hunts Point in the Bronx.

In summer 2013, excavations to install water mains uncovered over 100 empty liquor bottles from the 18th century used as part of landfill to extend the street to the East River.[3]

Fulton Street is served by the 2 3 4 5 A C J Z trains at the Fulton Street subway station. The Fulton Center renovation project for the station was completed in November 2014.