In mathematics, function composition is the pointwise application of one function to the result of another to produce a third function. For instance, the functions f : X → Y and g : Y → Z can be composed to yield a function which maps x in X to g(f(x)) in Z. Intuitively, if z is a function of y, and y is a function of x, then z is a function of x. The resulting composite function is denoted g ∘ f : X → Z, defined by (g ∘ f )(x) = g(f(x)) for all x in X.[note 1] The notation g ∘ f is read as "g circle f ", or "g round f ", or "g composed with f ", "g after f ", "g following f ", or "g of f", or "g on f ". Intuitively, composing two functions is a chaining process in which the output of the inner function becomes the input of the outer function. 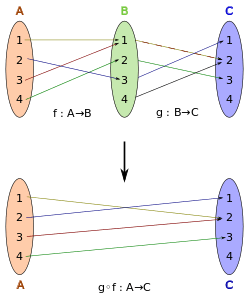 Concrete example for the composition of two functions.

The composition of functions is always associative—a property inherited from the composition of relations.[1] That is, if f, g, and h are three functions with suitably chosen domains and codomains, then f ∘ (g ∘ h) = (f ∘ g) ∘ h, where the parentheses serve to indicate that composition is to be performed first for the parenthesized functions. Since there is no distinction between the choices of placement of parentheses, they may be left off without causing any ambiguity.

In a strict sense, the composition g ∘ f can be built only if f's codomain equals g's domain; in a wider sense it is sufficient that the former is a subset of the latter.[note 2] Moreover, it is often convenient to tacitly restrict f's domain such that f produces only values in g's domain; for example, the composition g ∘ f of the functions f : ℝ → (−∞,+9] defined by f(x) = 9 − x2 and g : [[interval (mathematics)#Infinite endpoints|[0,+∞)]] → ℝ defined by g(x) = √x can be defined on the interval [−3,+3]. Compositions of two real functions, absolute value and a cubic function, in different orders show a non-commutativity of the composition.

The functions g and f are said to commute with each other if g ∘ f = f ∘ g. Commutativity is a special property, attained only by particular functions, and often in special circumstances. For example, | x | + 3 = | x + 3 | only when x ≥ 0. The picture shows another example.

Derivatives of compositions involving differentiable functions can be found using the chain rule. Higher derivatives of such functions are given by Faà di Bruno's formula. 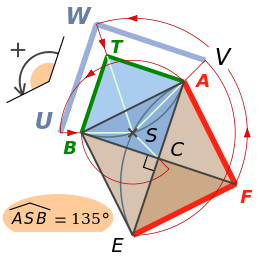 If the transformation are bijective (and thus invertible), then the set of all possible combinations of these functions forms a transformation group; and one says that the group is generated by these functions. A fundamental result in group theory, Cayley's theorem, essentially says that any group is in fact just a group of permutations (up to isomorphism).[6]

The set of all bijective functions f: X → X (called permutations) forms a group with respect to the composition operator. This is the symmetric group, also sometimes called the composition group.

If Y ⊆ X, then f: X→Y may compose with itself; this is sometimes denoted as f 2. That is:

More generally, for any natural number n ≥ 2, the nth functional power can be defined inductively by f n = f ∘ f n−1 = f n−1 ∘ f. Repeated composition of such a function with itself is called iterated function.

Note: If f takes its values in a ring (in particular for real or complex-valued f ), there is a risk of confusion, as f n could also stand for the n-fold product of f, e.g. f 2(x) = f(x) · f(x). For trigonometric functions, usually the latter is meant, at least for positive exponents. For example, in trigonometry, this superscript notation represents standard exponentiation when used with trigonometric functions: sin2(x) = sin(x) · sin(x). However, for negative exponents (especially −1), it nevertheless usually refers to the inverse function, e.g., tan−1 = arctan ≠ 1/tan.

In some cases, when, for a given function f, the equation g ∘ g = f has a unique solution g, that function can be defined as the functional square root of f, then written as g = f 1/2.

More generally, when gn = f has a unique solution for some natural number n > 0, then f m/n can be defined as gm.

Under additional restrictions, this idea can be generalized so that the iteration count becomes a continuous parameter; in this case, such a system is called a flow, specified through solutions of Schröder's equation. Iterated functions and flows occur naturally in the study of fractals and dynamical systems.

To avoid ambiguity, some mathematicians choose to write f °n for the n-th iterate of the function f.

In the mid-20th century, some mathematicians decided that writing "g ∘ f " to mean "first apply f, then apply g" was too confusing and decided to change notations. They write "xf " for "f(x)" and "(xf)g" for "g(f(x))".[9] This can be more natural and seem simpler than writing functions on the left in some areas – in linear algebra, for instance, when x is a row vector and f and g denote matrices and the composition is by matrix multiplication. This alternative notation is called postfix notation. The order is important because matrix multiplication is non-commutative. Successive transformations applying and composing to the right agrees with the left-to-right reading sequence.

Mathematicians who use postfix notation may write "fg", meaning first apply f and then apply g, in keeping with the order the symbols occur in postfix notation, thus making the notation "fg" ambiguous. Computer scientists may write "f ; g" for this,[10] thereby disambiguating the order of composition. To distinguish the left composition operator from a text semicolon, in the Z notation the ⨾ character is used for left relation composition.[11] Since all functions are binary relations, it is correct to use the [fat] semicolon for function composition as well (see the article on composition of relations for further details on this notation).

Given a function g, the composition operator Cg is defined as that operator which maps functions to functions as

Composition operators are studied in the field of operator theory.

Function composition appears in one form or another in numerous programming languages.

Partial composition is possible for multivariate functions. The function resulting when some argument xi of the function f is replaced by the function g is called a composition of f and g in some computer engineering contexts, and is denoted f |xi = g

When g is a simple constant b, composition degenerates into a (partial) valuation, whose result is also known as restriction or co-factor.[12]

This is sometimes called the generalized composite of f with g1, ..., gn.[13] The partial composition in only one argument mentioned previously can be instantiated from this more general scheme by setting all argument functions except one to be suitably chosen projection functions. Note also that g1, ..., gn can be seen as a single vector/tuple-valued function in this generalized scheme, in which case this is precisely the standard definition of function composition.[14]

A set of finitary operations on some base set X is called a clone if it contains all projections and is closed under generalized composition. Note that a clone generally contains operations of various arities.[13] The notion of commutation also finds an interesting generalization in the multivariate case; a function f of arity n is said to commute with a function g of arity m if f is a homomorphism preserving g, and vice versa i.e.:[15]

The composition is defined in the same way for partial functions and Cayley's theorem has its analogue called Wagner-Preston theorem.[16]

The category of sets with functions as morphisms is the prototypical category. The axioms of a category are in fact inspired from the properties (and also the definition) of function composition.[17] The structures given by composition are axiomatized and generalized in category theory with the concept of morphism as the category-theoretical replacement of functions. The order inversion in the formula (f ∘ g)−1 = (g−1 ∘ f −1) applies for groups in general and for the inverse relation; each of these is a dagger category.

The composition symbol ∘  is encoded as U+2218 ∘ RING OPERATOR (HTML &#8728;); see the Degree symbol article for similar-appearing Unicode characters. In TeX, it is written \circ.