This article is about the Gauda and Kunbi communities in Goa. For other groups labeled Kunbi, see Kunbi (disambiguation).

Gaudas and Kunbis are aboriginal people residing in the coastal Indian state of Goa. They are believed to be the original inhabitants of Konkan. Most of them have been following folk Hinduism,whereas many were baptized to Catholicism by the Portuguese missionaries in last few centuries,while they have still kept their folk tradition and culture alive.They were hierarchically classified as landless laborers. 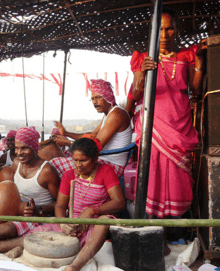 They are categorised as an Other Backward Class.[1]

Gaudas, Kunbis, Velip and another shepherd tribe called the Dhangar, have organised themselves into an aboriginal focussed network, called The Gauda, Kunbi, Velip and Dhangar Federation or in short GAKUVED. Another Adivasi-rights resource center MAND also works for their betterment.[2]

On 23 February 1928, many Catholic Gaudas were re-converted to Hinduism notwithstanding the opposition of the Church and the Portuguese government.[3] This was carried out by a Hindu religious institution from Mumbai known as Masurashram. The converts were given Hindu names but the Portuguese government put impediments in their way to get legal sanction to their new Hindu names.[4] 4851 Catholics from Tiswadi,2174 from Ponda,250 from Bicholim and 329 from Sattari Catholic Gaudas were re-converted to Hinduism after nearly 400 years. The total number of the converts to Hinduism was 7815.[5]