Kudaldeshkar Gaud Saraswat Brahmin is a community hailing from the western coast of India, residing in the Konkan division of Maharashtra, Goa. This community is also known as Kudaldeshkar Aadya Gaud Brahman,Kudaldeshkar and sometimes Kudalkar Brahmans.[1] They speak Marathi, Malwani dialect of Konkani. 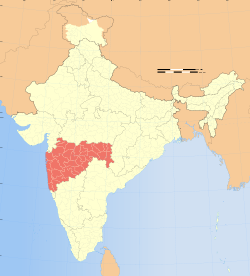 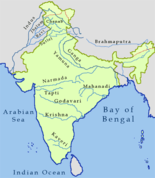 The location of state of Maharashtra in India. Majority of Kudaldeshkars live in Maharashtra and the adjacent state of Goa (left) 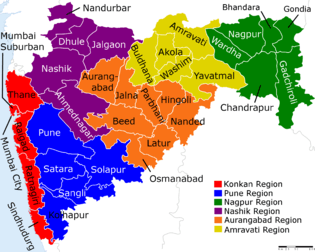 Divisions of Maharashtra. The red region is an approximate indication of Konkan, the coastal region of Maharashtra and the ancestral home of Kudaldeshkars

Kudaldeshkar Adya Goud Brahmans follow Shankaracharya's Advait school of philosophy, and have their own three centuries old Math in Dabholi village in the Indian state of Maharashtra. The first pontiff of the Shreemat Purnanand Swamiji[2] was initiated into Sanyasa by Vishwananda Swamiji. The present 20th pontiff of the Math is Pradyumnanand Swamiji.[3]

They abide by all the Shodasha Samskaras and other Brahminical rituals, but are not so orthodox, and are highly educated, cultured, and flexible.[4]

The original language of Kudaldeshkars is Malwani. The Malwani dialects of Konkani (also referred to as a creoles between Konkani and Marathi). Today Malwani is more significantly identified as the principal language of Kudaldeshkars and also of the natives of the Sindhudurg district. There is no special script or text characters for Malwani and it is generally written in Devanagari. They also speak Marathi in Maharashtra, and Konkani in Goa, and Karnataka. Malwani is also called Kudali, originally known as Kudwali. Kudwal is the ancient name for Kudal.[5]

Since the community had its base in the Konkan area, food habits are naturally influenced by the sea coast.Naturally, fish was and is the primary ingredient. Various varieties of fish are merrily consumed. Since availability of fish is a seasonal story, even dry fish becomes necessary. Fish is either fired or made into a delicious curry. Almost all of them are deep-sea fish eaters and thus non-vegetarians, but Kudaldeshkars do not consider fish as a non-veg diet. Kudaldeshkars mostly prefer fried, cooked, hot and tasty dishes. Their cuisine is unique, more of humid tropical nature, dominated by fish, rice, spices, kokums, raw mangos, cashew nuts and coconuts. Still, the Malwani diets unique characteristics are well distinguished from Goan food. Kudaldeshkars are not to keen in fruits intake. But the Konkan region is one of the biggest for growing Bananas and Alphanso Mango.[6]

Kudaldeshkar Adya Gaud Brahmin the first cricket match in the history orgainsed in 17th Jan 2016 and the winning team was shri dev Gautameshwar 11 and the runner up was shri devi bhagvati 11.The best Batsman was Amit Thakur from Goregaon and man of the match was Bhushan kapdoskar and the best bowler was Yogesh Khanolkar from malad and the best aged player was ulhas patkar.